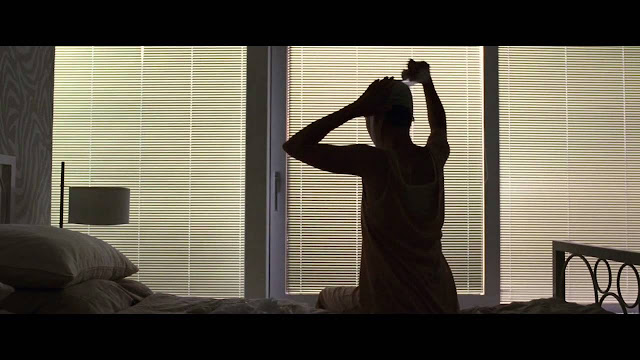 Within the confines of a modern, sleek mansion of shut-blinds, disturbing dynamics emerge between a mysterious mother (inexplicably bandaged around her head) and her twin sons. Directed and scripted with elliptical flourish by Severin Fiala and Veronika Franz, this Austrian horror story builds up to a queasy, grim third act of torment and to what some may find to be a predictable, groan-inducing twist. But those who think deeper about the movie and its oddities, may find there's more than meets the eye (and some fun reddit theories). Many, including myself (I was most scared of sitting in a dark theater and half-watching the scenes of giant hissing cockroaches) may have been and will be duped by the brilliantly crafted trailer which suggests more of a standard, good entertaining fright flick than what the film actually is--a meditative, woozy David Lynch-ian nightmare.  *** 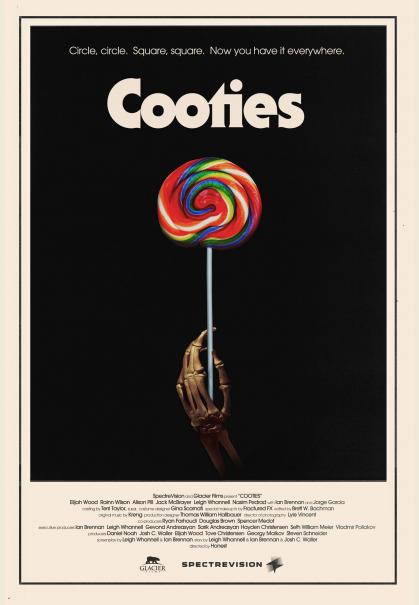 Recently a report was released that the majority of fast food chains (including Starbucks) received poor grades on their meat products. A new creature feature from Cary Murnion and Jonathan Milott exploits these American food fears with school tykes turning rabid after munching on infected chicken nuggets. Elijah Wood (sort of the prince of low budget horror these days) is a failed writer-turned substitute teacher; his foil is played with gusto by Rainn Wilson, a brash, gussied-up, big-wheeler truck drivin' gym coach who emerges as the unlikely hero. The movie is noisy and yucky as heck, the daytime scenes are nauseatingly bright and it sledgehammers a lot of the comedy (including school safety agent Jorge Garcia tripping out in a van) but there are some throw-your-hands-up-and-shrug laughs to be had in the thick, gruesome nonsense. Perhaps most disappointing is that the movie is more like its generic poster than the brilliant, canny retro one pictured here.   **1/2

sleeping with other people 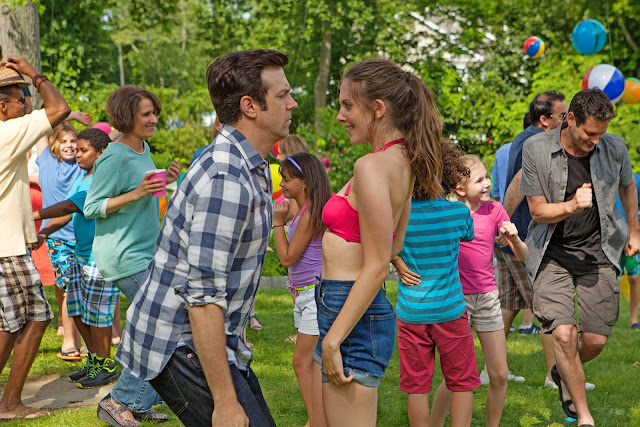 When the credit “Produced by Adam McKay and Will Ferrell” appears early in Sleeping with Other People, the audience could be forgiven for making a certain assumption about the film.  After all, these are the guys who made raunchy, bro-culture comedies like Anchorman and Talladega Nights, so surely we’re in for a broad, testosterone crazed laugh fest.  If movies of that ilk aren’t really your cup of tea, you might be surprised by how much deeper and sweeter ‘s feature truly is.  It’s so good it might just avert the death knell of the romantic comedy.

The familiar clichés are there: two people (Jason Sudeikis and Alison Brie) who are clearly perfect for each other find a semi-contrived reason to stay platonic: they’re both borderline sex and love addicts with a history of using and discarding partners (or being discarded).  New York City is “a character” in the movie, with its scenes set variously on a ferry, in Central Park, or in a hole in the wall dumpling joint.  Both are involved with attractive people who are obviously wrong for them: Brie with Adam Scott‘s philandering gynecologist, Sudeikis with Amanda Peet’s high powered business woman. 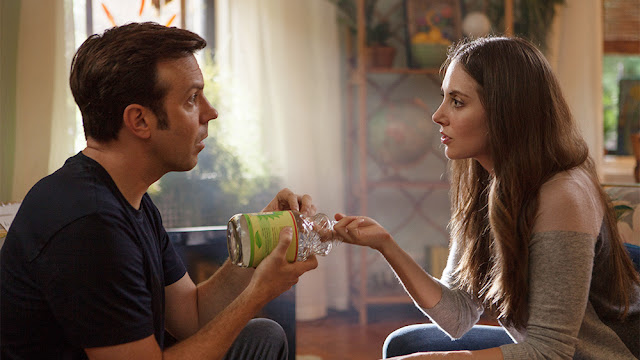 Even the raunchy/sweet combo has been well honed in movies ranging from American Pie to Knocked Up.  But Sleeping with Other People transcends those comparisons by being so authentic and heartfelt.  The frank scenes and discussions of sex are refreshing and grounded in believable relationships, so they always feel organic to the story.  Even the more flamboyant moments-- a gay sex addict’s confessions about his filthiest exploits at a 12 step meeting, a spurned woman’s increasingly clingy text messages delivered right at the camera—add variety without pushing the film too far into camp.  Certainly the performances contribute greatly to the movie’s success.  The entire cast is solid, with Sudeikis and Brie’s lived-in, immensely likable performances and palpable chemistry holding Sleeping’s center.

All rom coms essentially have to pull off a “trick,” allowing us to suspend our disbelief that two soul mates would take so long to figure out what we the audience have known from the start.  Sleeping with Other People accomplishes this with such panache, humor, and genuine warmth that it emerges not only as a great comedy but a great movie, period. 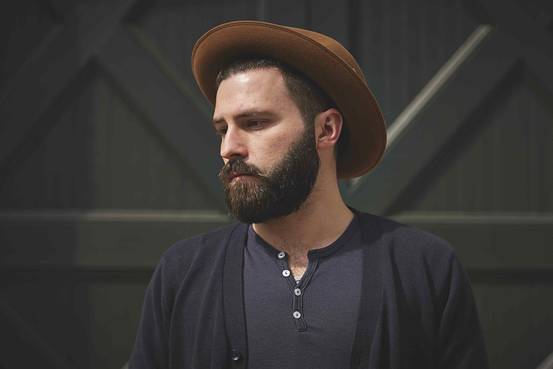 Posted by MrJeffery at 2:00 PM No comments: 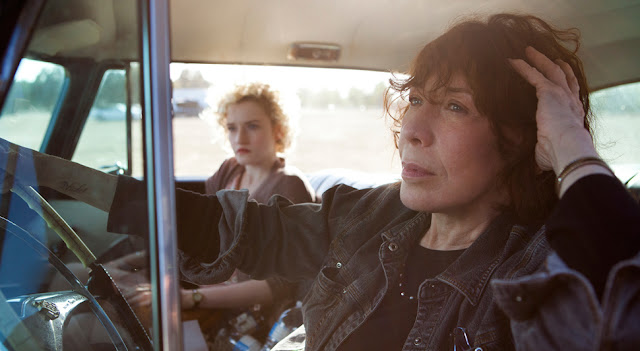 Lily Tomlin is such a treasure, but like Betty White and other comediennes of a certain age, she’s not usually allowed center stage.  Her fans have to make do with engaging cameos in movies and television shows, or else make do by revisiting old favorites like 9 to 5.

So it’s delightfully awesome that Tomlin has the lead role in Grandma.  And that it’s directed by a man, American Pie and About a Boy co-creator Paul Weitz.  And that she’s playing a lesbian!

Tomlin’s lovable ornery poet is onscreen for every scene of this dramedy, and as expected she imbues this character with depth, humor, and sass to spare.  The unusual, female centric plot takes the road trip formula and turns it on its head by centering it on the quest to pay for Tomlin’s granddaughter's (newcomer Julia Garner) abortion.  This leads to broader moments like Tomlin railing against pretentious coffee houses or giving her granddaughter’s lame-o ex (Nat Wolff) what for, as well as her grappling with relationships with her young ex-girlfriend (the ever-dependable Judy Greer) and a surprising older flame.  Not surprisingly, everyone learns a thing or two about life along the way, and long simmering conflicts come to a head; Marcia Gay Harden has a brief but pivotal role as Julia’s comically uptight mom. 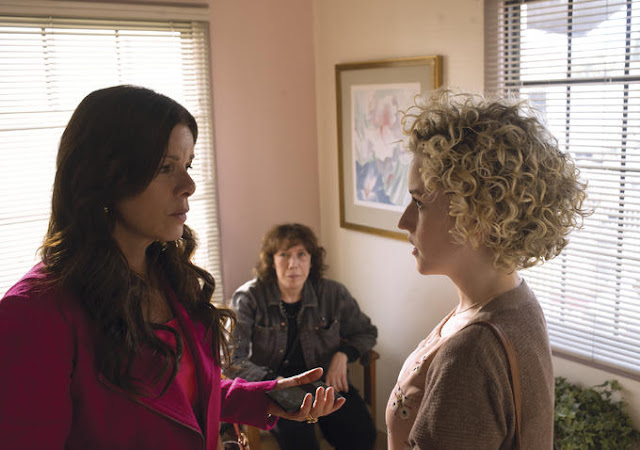 As unconventional as it is in terms of subject matter, Grandma follows some well-worn formulas, and it’s doubtful anyone will be surprised by the way things turn out in the end.  But it’s so consistently entertaining and satisfyingly emotional that only a hardened cynic would reject it.  It also goes a long way towards putting the stories of women—in particular lesbian and transgender women—into the mainstream, making their struggles relatable for female/queer and male/straight audiences alike.