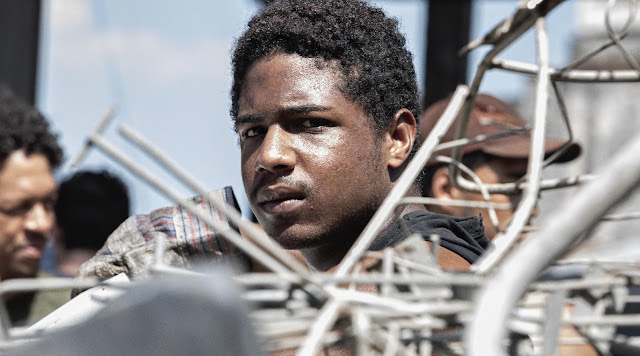 Set in modern day Brazil, Alexandre Moratto's 7 Prisoners is a straightforward, no-frills, but harrowing story. Young Mateus (a very good Christian Malheiros, who also starred in Moratto's Socrates) moves away from his family out of his rural home to accept a job that is seemingly bound with promise and prosperity in São Paolo. Alongside his fellow young workmates (Bruno Rocha, Vitor Julian, Lucas Oranmian) from similar societal and economic backgrounds, the group arrives in the city, with energy and excitement. They stare out the van windows at the traffic and tall buildings. Mateus later claims he has "dibbs" on a condo: "I wanna see the city from way up high," a line that becomes more ironically baleful as the film progresses. They arrive at the living quarters of their gated scrap metal yard, run by the cunning Luca (Rodrigo Santoro) with his piercing eyes, thin frame and scraggly graying beard, gun in his blue jeans. Soon, Luca reveals himself as menacing and tyrannical, as the group of young men begin dangerous work in the junkyard with no pay or care, lifting heavy and sharp metal and removing rubber from wires for a lucrative resource: strands of copper. 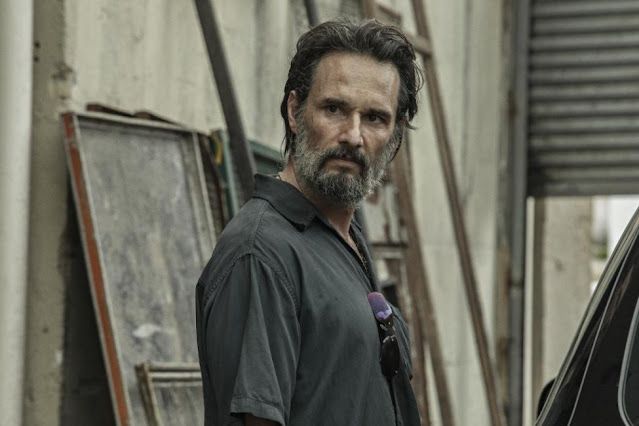 The film becomes most distressing and complicated when Mateus, through his loyalty, gets placed as a sort of sub-leader of the group. He also becomes implicit in acts of human trafficking, and we witness the thorny chain of corruption that starts from the top. The strong performances by Malheiros and Santoro help illustrate the their characters' complicated relationship and the film's tensions. The portrait of São Paolo is not a flattering one, especially visually, and incongruent with the insect-buzzed lush greenness of Mateus's hometown in Catanduva. The grayish, unadorned, matter-of-fact photography by João Gabriel de Queiroz captures the haphazard and steely ickiness of the city. We see the results of the young men's slavery in sizzling, crackling ugly tangles of black wires: "... enough to keep this city running," Luca says to Mateus in one scene, and then pointing, with a prideful smile, "That wire copper wire came from the junkyard. Look at your work across the city." It's an obvious metaphor for how entangled these characters are in the agonizingly hopeless system, but because of Thayná Mantesso and Moratto's taut screenplay, no less a potent one. ***

Posted by MrJeffery at 2:44 PM