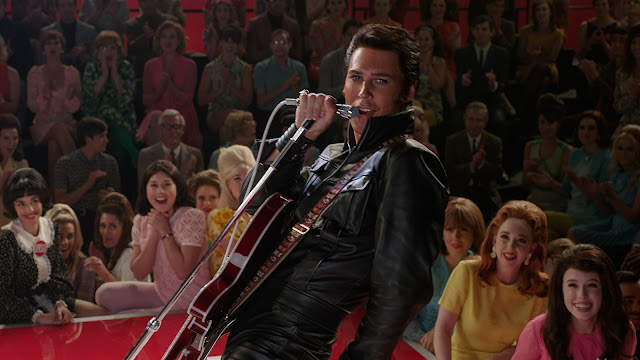 In the tradition of his film adaptations of Romeo + Juliet and The Great Gatsby, Baz Luhrmann offers up another glitzy and grand tragedy with Elvis. It's told from the warped perspective of Elvis Presley's notorious manager, dubbed The Colonel (Tom Hanks playing against his usual admirable, heroic type as villain with a peculiar accent and wrapped in wobbly latex). Awash in debt and health issues, The Colonel narrates this tale from his morphine-dripping death bed, that spottily spans Elvis's (Austin Butler; with Chaydon Jay playing the young version) childhood to the final years. It's immediately an unusual and bracing perspective, and, in a sense, the film winds up being a feverish American nightmare rather than a fun and celebratory ode--a tale of a doomed pop figure manufactured and promoted by a grifter. 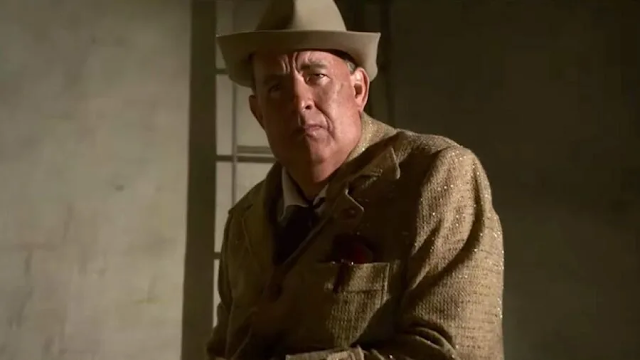 The film clocks in at nearly three hours, but it's uneven in the eras it portrays of Elvis' career. Primarily, it hones in on his meteoric rise during the mid to late 1950s, and then cements itself in the late 60s and early 70s of Presley's '68 Comeback Special and his Vegas residency--skimping over the early and mid-1960s. Maybe because of this, the film feels centerless. Priscilla Presley, despite Olivia DeJonge's sturdy performance, may be one of the most underwritten and underbaked "supportive wife" roles I can think of--she almost seems like an objectified, floaty ghost. Is it because we are seeing Elvis' life through the Colonel's eyes? Or is it just lazy screenwriting, creaking under all of the Luhrmann panache? Unlike his other adaptations from masterpieces, the script credited to Luhrmann himself, Sam Bromell, Jeremy Doner, and Craig Pearce, has some cringeworthy moments, with The Colonel's derivative narrating that bang out on top of Luhrmann's already obvious visuals, including "I don't know much about..." lines that recall Forrest Gump. 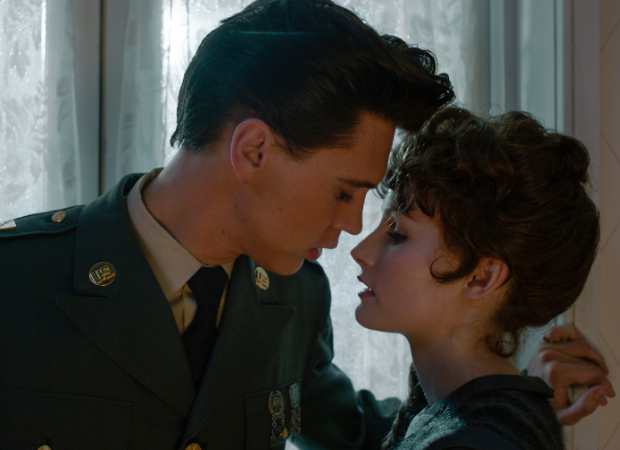 Like Gump, Hanks is playing a cinematic symbol, an almost "unreal" person. Here, he is saddled with icky prosthetics and make-up that's nearly as garish as Presley's tackiest décor--but in deep contrast with Presley's angular, suave looks. The shapeless movie plays almost like a predatory love affair--and perhaps that is true to life. But when Hanks suddenly isn't there lurking about and over-narrating the piece, the film becomes much more involving: a scene between Elvis and Priscilla during his military time set to Kacey Musgraves' gravely and elegant cover of "Can't Help Falling in Love" sparks. Alongside Musgrave's rendition, the soundtrack is spiked with samples and re-dos of Elvis tunes (including "Vegas," which samples Big Mama Thorton's biting and far superior version of "Hound Dog"). The soundtrack works well as a tapestry of sounds, as Elvis is infamous for stealing the stylings and music of black artists, while being simultaneously influential on an array of pop artists today. Another highlight is the amazing singer Yola as Sister Rosetta Tharpe, an artist who inspired Presley in childhood. 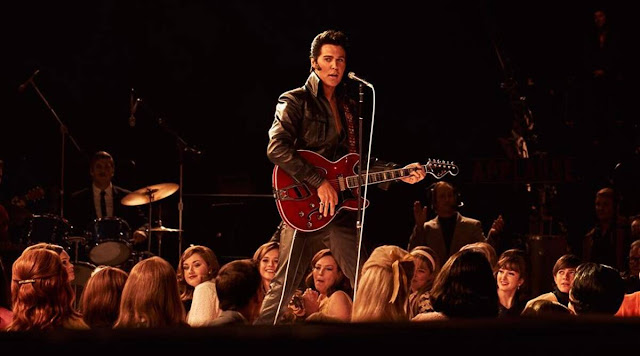 The crass commercialism of Presley is well-defined in the film, especially through The Colonel's hucksterism. Even when Presley tries to keep up with the hipper Stones and Beatles in the latter '60s and dabble in authenticity, gravitating towards another management team, the guise of cool rootsiness is all through the prism of leather-jacketed consumerism, exploding in the rousing Elvis: The Comeback Special--one of the best parts of the movie, despite The Colonel annoyingly huffing and puffing around backstage. 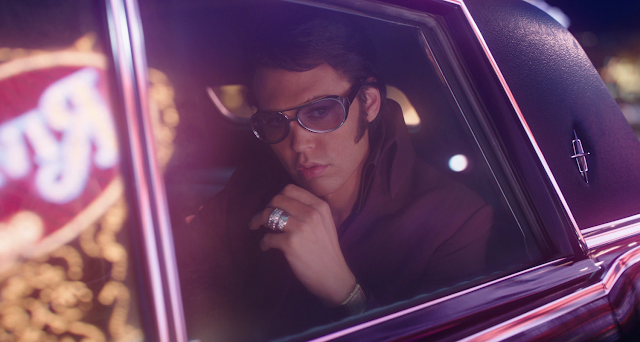 Luhrmann's film does raise interesting questions and images of combustible creativity and sexuality tangled in the web of capitalism, but sometimes it's so overwrought, it ends up feeling less stirring than presented. Presley's sweaty, energetic, against-type classic "Suspicious Minds" is stricken out too literally as The Colonel plots his own "trap" for Elvis (one strike is great, but several, mapped out on a cocktail napkin, is overkill). Overall, as it lumbers through, the picture struggles to be consistently effective. Bob Fosse's All That Jazz, is also a heavily-edited, similarly sinister take on showbiz, but instead, shows us the sweaty realism of its characters and relationships and really saves the baggy, madcap razzle dazzle for the closer--a wrenchingly potent, simultaneously fantastical and raw ending. Luhrmann's film sticks so close to The Colonel's vision of an enigmatic, godly Elvis, that the film not only never catches a breath, but never really delves into a feeling of who Elvis was or the music he made (many of his songs, especially the deep cuts, of such a gold-recorded career are absent in the movie). When Priscilla mentions all the women he's been with, we never see it--we only get a saintly and sanitized version who cowers and cries unless shimmying onstage. He's often framed in small spaces, on the floor of his mother's closet hanging on to the hem of one of her dresses after her death, or in his cars, or his low-ceilinged rooms--padded in satin like a coffin. Onstage, he roams freely, and seems most alive, even as he is trotted out like a racehorse driven to exhaustion. 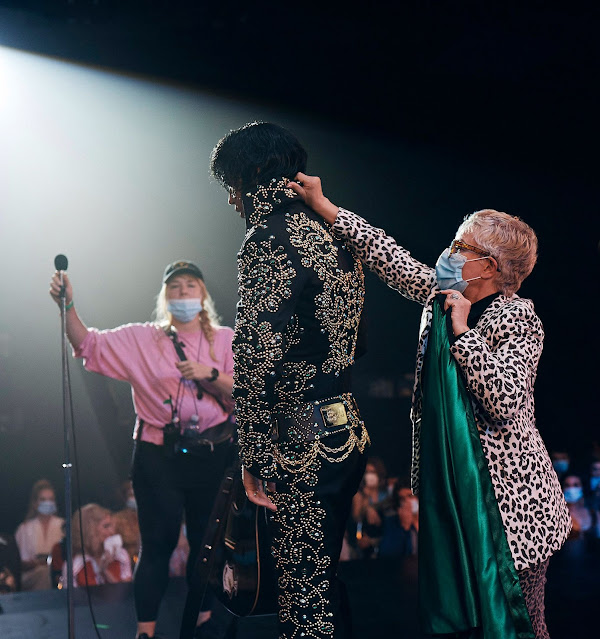 I felt the film did little favor to Butler, as the script is so weak and the film itself is so chopped-up through montage and frenetic editing, I couldn't really get attached to his performance. But I found he ended up capturing the essence (or the sense of essence) of Elvis better than the film does. Also Catherine Martin's costuming (photo above from Harper's Bazaar) is absolutely smashing--from all those supporting players, extras, to the King himself. Even if the movie is underwhelming, it's really thrilling to behold such magnificent crafts (those Priscilla hairdos! that hip-swinging choreography! those recreations of Graceland!). **