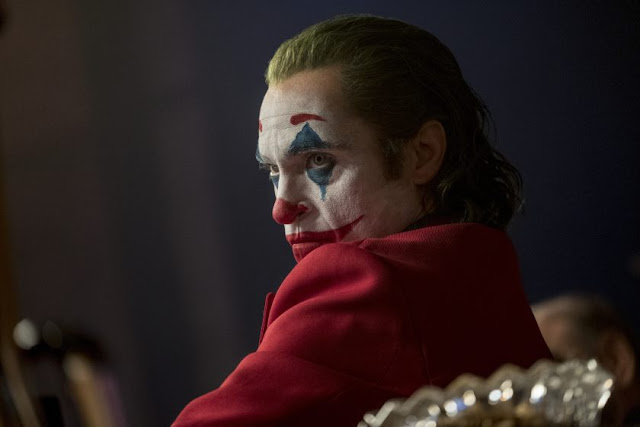 Much hoopla has surrounded Todd Phillips' origin story Joker--so much hoopla that I was taken aback how lightweight it really is. Despite Joaquin Phoenix's showy performance as the title character Arthur Fleck--all slicked-back mane, caved-in chest, swirly dance moves, volcanic hysterics and sweat--I never felt much of a connection to him on a human level. He's purely smeared make-up and a joyless cesspool of actorly tics.

My screening began with a PSA for "ending the stigma" of mental illness. It was sort of a strange way to dive into Joker, which ultimately emerges as another trite mainstream Hollywood portrayal of psychological "madness"--the kind of frenzied behavior we've seen exploited by cinema for years. This film is set around 1981 (as the marquee for Brian De Palma's Blow Out suggests), the beginning of the Reagan-era. Here the politics of the times are filtered through the somewhat parallel fictional world of Gotham City with its high unemployment rate, unending garbage strikes and brutal social benefit cuts (including Arthur's own therapy treatments). Arthur's subway shootings of three Wall Street jerks spurs a fiery anti-establishment movement of protesters in clown masks. But Arthur is an accidental savant, he isn't driven so much politically as he is by his own personal vendetta against rich mayoral candidate Thomas Wayne (Brett Cullen).

In this grimy, grim world, Arthur simply wants to make people laugh, but he is continuously thwarted by society. When Arthur becomes a guest on a late night show (Robert DeNiro plays host--the movie heavily references Scorsese's King of Comedy and Taxi Driver), the movie goes for a direct riff of the mad-as-hell climax of Sidney Lumet's Network. Yet Paddy Chayefsky's script for that film was so dynamic, layered and poetic, that the 1976 movie is more urgent still than this current film which feels distant and fatigued. I was also reminded of Rebecca Hall's devastating portrayal of Christine Chubbuck--a similarly patterned period piece of an unstable, frustrated outsider, striving for a sense of doing good for the world through media relevance. Despite the slick production design (Mark Friedberg), costuming (Mark Bridges, who has done extraordinary work with Paul Thomas Anderson), its photography (Lawrence Sher), its big score (by Hildur Guðnadóttir) and its lofty referencing, the movie never quite feels as bold as it seems to think it is. In the end, what's most interesting about Joker is its entrenched social reaction today, especially because so few, if any, raw character studies are box office draws anymore. Because it's unique in the D.C. canon and hauled in cash, Joker will likely end up changing the landscape of by-the-numbers comic book cinema and imitated within mainstream Hollywood. In that sense, it feels like a great step in a new direction for a tired genre at the end of another decade, but still, this film feels similarly slight and overwrought as many of its action-driven, CGI-ridden counterparts.  **