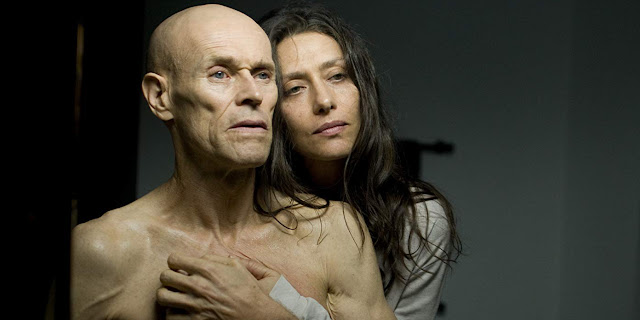 “We’re never going to have another Fellini film. That’s what matters.” That's a line Diego Fairman (Willem Dafoe) utters in Héctor Babenco's My Hindu Friend. This is a movie about coming to terms with finality. The Argentine-born Brazilian director Babenco may be most familiar to American audiences for his Oscar-winning film Kiss of the Spider Woman. He died at age 70 in 2016. My Hindu Friend is his last film, originally out in 2015, and just now hitting limited release in America. Like Bob Fosse's 1979 All that Jazz and this past year's Pedro Almodóvar's Pain and Glory, this is a director's unique and intensely personal vision of an artist facing their own mortality.

As Diego, Dafoe plays a version of Babenco, a formerly famous director, rail thin and bald from chemo treatments, his roping bones close to skin. He doesn't want to die in a hospital, but at home. But he spends much of this story in a hospital in the first hour of the film, undergoing the process of a painful transplant--"new blood" creating a new system--a new life. Dafoe, always a compelling thespian, plays his moments of pain and fear with his usual exactness. He's a man "going on a trip... not sure there's a way back." The hospital scenes are full of drudgery presented in a matter-of-fact way tinged with dry humor, like signing papers and listening to teams of doctors, specialists and nurses explaining risks. Among the bland and miserable setting, little visual juxtapositions occasionally flourish: a surfer on TV, coasting waves--so very far removed from Diego's physical condition; a stuffed gorilla on the floor, a Disney tie on a doctor, a poodle on the shirt of a nurse; medical machinery suddenly filmed with starry splendor. 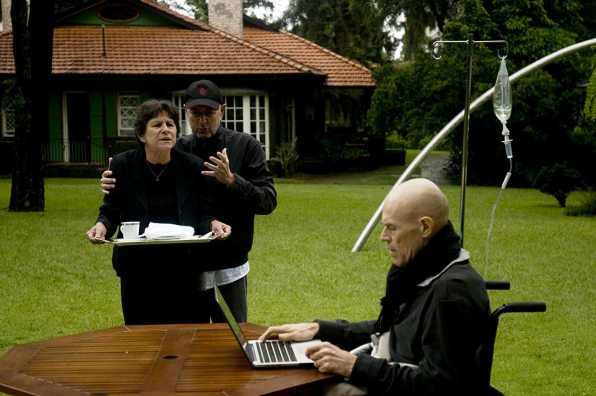 These visual cues and the striking shots throughout by Mauro Pinheiro Jr. and also Zbigniew Preisner's very pretty score that drifts in and out, adds to this movie's peculiar beauty and are the main strengths of My Hindu Friend. When it goes for more plot-driven mechanics like Diego's brother asking for a million dollars for the transplant, or Diego's relationship with his wife Livia (Maria Fernanda Cândido), the film feels less interesting. The film unsuccessfully strains of the significance of the titular character. What I appreciated though was how messy the movie was--like the little frank, wine-soaked vignettes of his friends' conversations near the beginning of the film at Diego's wedding. 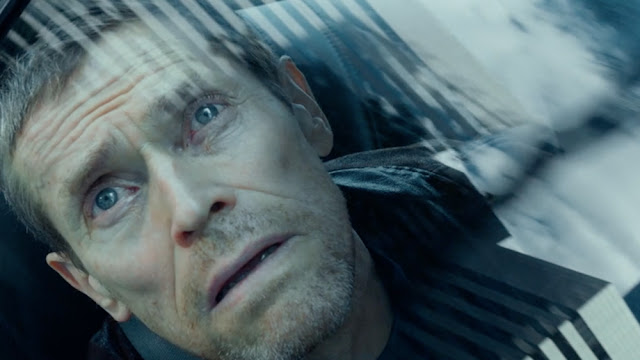 Eventually we see Diego in a stage of healing, but knowing the director's eventual end, we know this is a portrait of a man who seems to be hurriedly trying to get out as much as possible in his final years--including hallucinatory (complete with fade-outs) scenes with a mysterious man and glimmers of women in various stages of undressing (breasts are a-plenty) that he seems to be deeply attracted to. It is indeed Fellini-esque (and also Fosse-esque) to have this ravishing "much-ness," this striving for profundity in the face of death. And also a nostalgic, pounding love for old entertainment--a bedroom set from an Astaire / Rogers picture figures, as do songs like "Cheek to Cheek" (belted by Dafoe with irony in his hospital bed). Or a visit to an empty studio sound-stage--reliving some filmic glory in the cockpit of a plane. The backyard lightning storm scene set to "Singin' in the Rain" is in particular a stunner and one that finishes out this director's vision, in joyous, dangerous ecstasy. *** 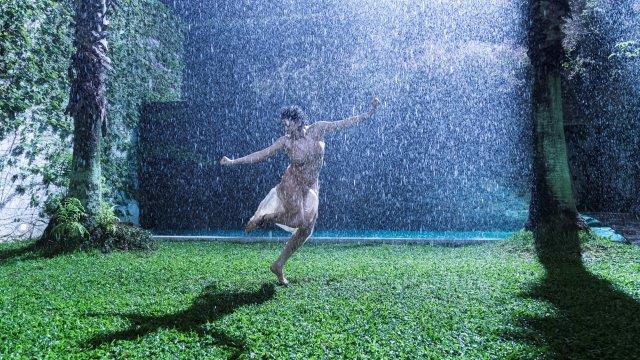