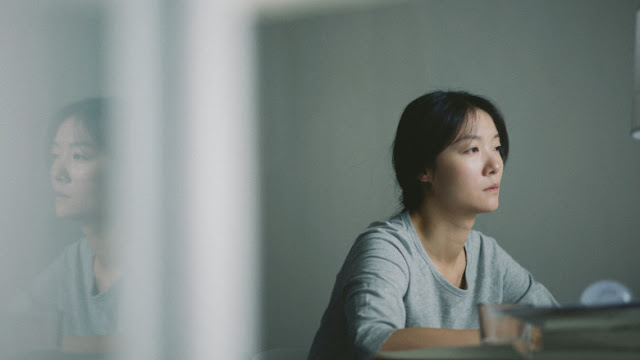 "Facing the universe makes you feel small," says one character in Song Fang's movie The Calming. This character has witnessed the Milky Way, making him feel "so small and insignificant," capturing it on film. The shots in The Calming, carefully composed by Fang and cinematographer Lu Songye, are less extravaganza and more spectacular in their ordinary beauty. This is the story of an artist's journey, in the wake of a break-up, back to establishing a sense of creation again. A documentary filmmaker, Lin (Xi Qi), travels from Tokyo to countrysides and towns by train, and ultimately back to her childhood home. It's a simple tale really, oft in solitude and stillness. People come and go that she vists in small scenes--many times people she hasn't seen in quite some time. The film does not announce who they are, instead we learn what her relationship with them may be, in moments of both clarity and opaqueness.

What the film and Lin are most enraptured by are surroundings--especially the natural world. We see a dissonance between the natural and the technological from the beginning in the opening shot of a projection screen of a forest, establishing human's ability to facilitate the manipulation of natural imagery ("I think the brightness can be turned down a bit..."). Later in an answer and question session post a screening of Lin's film, an audience member asks, perhaps with a shade of disdain, "... would an art gallery be a more suitable place to show your film?" Fang seems knowing and unashamed with her film's tone and lingering visuals. In a film of such spareness, the contrasts can seem especially stark--the sounds of people talking in the streets, cars, and the cawing of birds. Between long pauses in dialogue, the airiness of "empty sound" is even heard on the mix. When sharing a meal in a restaurant, a place noted for not changing in in forty years, out the large window, a garden. In one of the more visually arresting slices of the picture, Lin finds herself in a snow-swept town. We watch her in her black heavy coat, denim bag slung over shoulder, a single braid, and listen to the crackle of snow--snow heavy on branches on which a single bird flutters out. In contrast, we later see a bird nest heavy on a high, bare tree. In one moment, she studies historical artifacts behind glass, including a copy of Yasunari Kawabata's Snow Country. We learn later that Lin has long been entranced by snow since childhood. 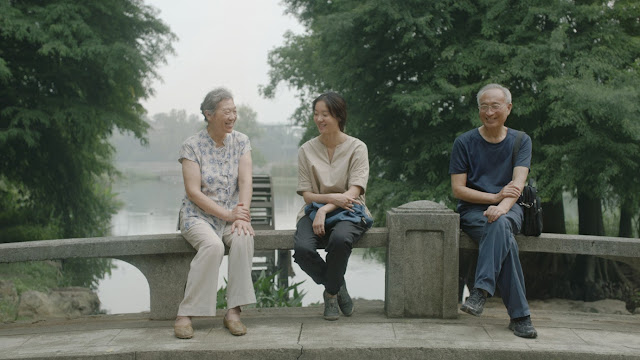 As hear wind through trees, as we watch Lin clean the surfaces of a very beige apartment, and arrange houseplants, there's always a sense of contentment with a sparking hint of dissatisfaction. Another train ride. Another lonely room, looking out at a city skyline or factories alight in the night. In one shot, the camera peers through a curtain at a still audience in red plush seats listening to Handel's aria "Convey me to some peaceful shore." And then we see Lin's face among the listeners and viewers, tears brimming her shut eyes. The Calming is a lovely ride, leaving us to "some peaceful shore," as sounds run over the credits (locusts, birds, and bubbling streams), but it's grounded in the frail, sometimes banal, sometimes quietly joyful and quietly agonizing realities of human existence.  ***

Posted by MrJeffery at 7:02 PM