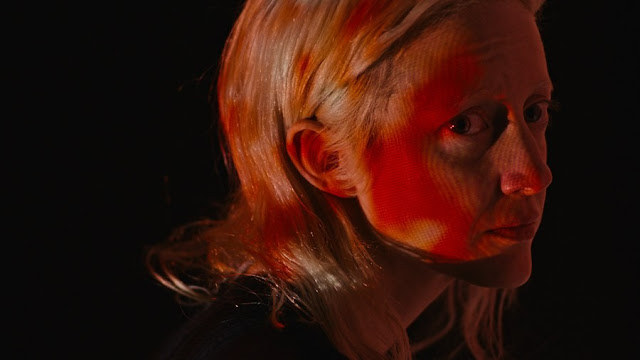 One of the more grim, potent and timely films of the year, Writer / Director Brandon Cronenberg's sci-fi / horror piece Possessor impactfully threads tricky themes of mind-control, tech, materialism, and violence. It is intriguing to see the influences of Cronenberg's father within the movie--especially films like Scanners and Videodrome--in its man vs. tech / man embedded within tech concerns, provocative, icky body horror (the word "squelches" came up as a sound effect descriptor a few times in the captioning), and its chilly Canadian-set visuals that suddenly provoke and shock in memorable, harsh imagery (the flim is shot by Karim Hussain). 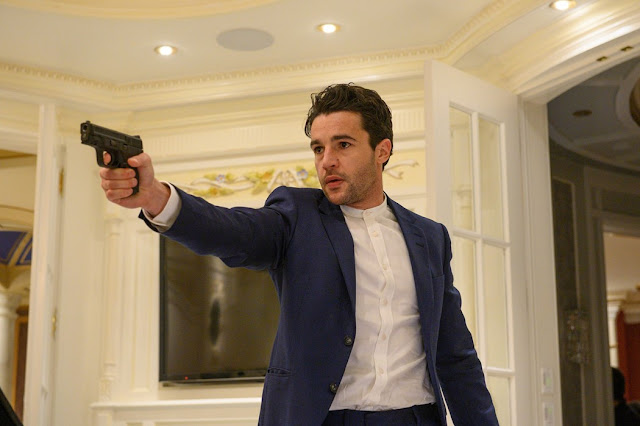 Possessor is about implant-tech that helps Tasya Vos (the reliably haunting Andrea Riseborough is Tasya; I recently have been watching the Heaven's Gate doc and some of the names are reminiscent of its cult leaders) under the direction of forbidding Girder (always a pleasure to see Jennifer Jason Leigh in anything, especially a strong, icy supporting part like this one) carry out corporate assassinations. The target of the film is John Parse (Sean Bean), the obscenely wealthy tycoon of a data mining company (in touches of dark, sardonic humor and creepiness, we see people spied upon to gather their preferences of window dressings). The vessel to commit murder is a worker bee cog in the machine of Parse's company, Colin Tate (Christopher Abbott), who is also the boyfriend of Parse's daughter Ava (Tuppence Middleton). The dark-eyed, young and fit, but world-wearied-looking Abbott is a perfect casting choice for this role. He has taken on some interesting projects lately, including It Comes At Night and Black Bear; both films are similar to Possessor in that they evoke themes of disease (physical, mental, moral) and paranoia and also lay out their stories in twisty, unconventional manners. 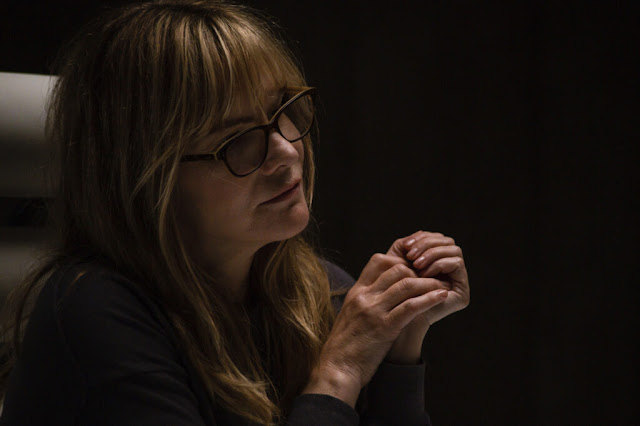 While the plot is rife with tension, Possessor is more of a captivating watch for all its cerebral touches and homages. It recalls the recent, underrated Leigh Whannell film Upgrade, where a man's actions are controlled by an implant. It also runs the gamut of the horror and sci-fi cinematic canon in subtle ways, perhaps unconsciously so--from Metropolis to Blade Runner to A Clockwork Orange. Two Kubrick-like, striking sets are featured: a chic apartment with white interiors and shiny gold throw pillows and Parse's lavish home--"to boredom!" he toasts from the upper-balcony to his feted-up employees below. For a lower-budget film, Possessor boasts powerful make-up and visual effects, a testament to Cronenberg and his team. We watch a face melting away in one scene--a Cronenbergian touch of audience implication in marveling at the horrific artifice of human destruction in movies; in an era of continually banal and shiny CGI, the crafts here feel textured and "real" and, like the film itself, are not for the squeamish. ***

Posted by MrJeffery at 9:12 AM