Suzanne Lindon impressively writes, directs, and stars in Spring Blossom. The coming-of-age movie is like a slim novella--the kind read outdoors at a sunny French café--similar to one depicted in the film--with a ringed coffee stain on the cover. Lindon plays sixteen year old Suzanne. Suzanne is somewhat awkward, soft-spoken, bored at school and bored of her schoolmates. At a party a friend asks her which of the boys there are cute and to rank them on a scale of one to ten: "If I really had to do it," Suzanne says, "I'd give everyone a '5'." Her sister and her parents are amicable and low-key, an ordinariness that doesn't call much attention to itself. There's a lot of chewing pens, staring off in mid-distance, nibbling on breakfast, checking one's nails. This mundanity is interrupted by a handsome theater actor named Raphaël (Arnaud Valois) who, often in solitude, frequents the café near Suzanne's morning route. Well-dressed, strong, bearded, with curly dark hair and piercing yet gentle eyes and a cherry red scooter, Suzanne is captivated by him from afar. 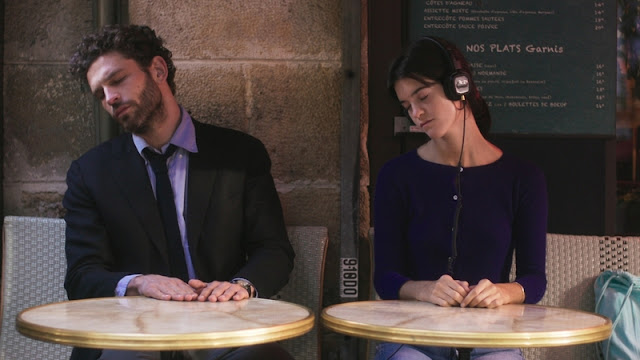 Lindon's film is well-crafted, eliciting a strange symbiosis between the pair--from uneventful little details (removing make-up from eyes) to the more fanciful, especially once they move closer together: choreographed dances (set to, of all things, the driving strings of Vivaldi's sacred music from Stabat Mater--a nice inverse to the driving strings in Mary J. Blige's "Family Affair" in a memorable party scene shot). As in any teenaged story, music has a particular, centerpiece impact. The delicate score is by Vincent Delerm; showing all the many myriads of talent, Lindon also sings the main theme song, "Seize printemps," as well. This tale is a fleeting one, and predictably not much happens between the two, but Suzanne's longing is palpable, as is Raphaël's quiet interest. When Suzanne enters his world through a party scene, the differences between them deepen. This modest film has its moments of distinctive observation, and shows incredible promise for Lindon. ***

Posted by MrJeffery at 2:23 PM