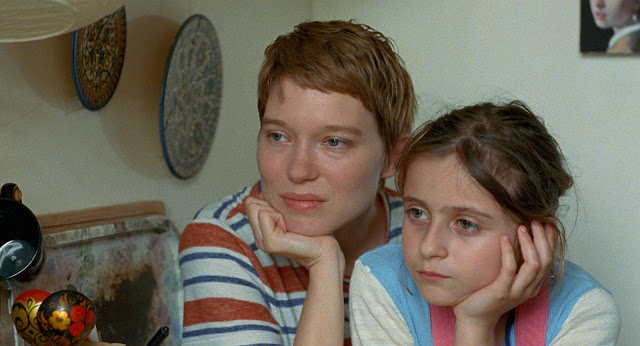 Léa Seydoux has shown distinctive contrast in just two performances from this year alone: as Caprice in Cronenberg's heady Crimes of the Future and as Sandra in Mia Hansen-Løve's warm One Fine Morning. The camera loves her in both instances, and she is a captivating presence--one isn't certain if she will go from stillness to suddenly bursting into tears. Hansen-Løve has noted she wanted to do something unique with Seydoux in mind, to not capture her with the "male gaze." Seydoux, with her pixie cut and unassuming threads, delivers a turn of kitchen-sink earthiness, even when roaming the chic streets of Paris and while working the difficult task as a translator. If Sandra's gift is listening so sharply that she is able to relay what she has heard in another language, there's an interesting fission that emerges in Hansen-Løve's film of Sandra's work and her real life. Hansen-Løve follows Sandra, also a widow with a young child (played amusingly by Camille Leban Martins), who is caring for her father Georg (Pascal Greggory), alongside her sister (Sarah Le Picard) and Georg's harmlessly feisty ex-wife (the always enchanting Nicole Garcia). Georg, a former philosopher and professor, is suffering from the neurodegenerative disorder Benson's syndrome which affects his eyesight, mobility and memory. Much of the film is about the family moving Georg from one home to another, as they navigate the bureaucracy of assisted care and waiting lists. Beautiful-looking books that Georg owns haunt the picture--almost living, breathing objects; Sandra has difficulty parting with these books as much as she does facing them. She is also having an affair with a scientist Clément (Melvil Poupaud). Clément is married, with a child around the same age as Sandra's. Their affair is a lustful one--brimming with tenderness and riddled with uncertainty--some of the ramifications of which are left a bit of a mystery. 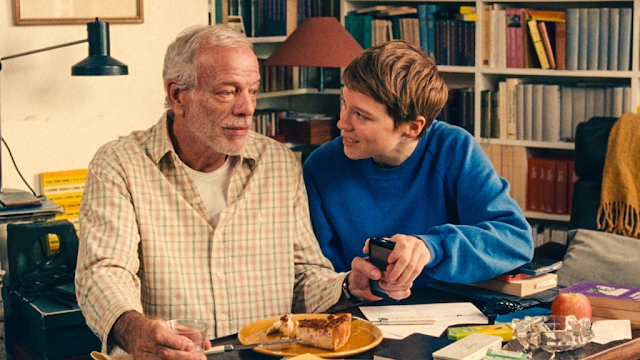 One Fine Morning is a glowing movie with bright and unfussy photography by Denis Lenoir (the primary colors pop!). By contrast, the editing by Marion Monnier, feels jagged and rough--with scenes, even ones that feel somewhat banal--cut before landing on a sense of rest or conclusion. This creates an unsatisfying and repetitious feel which is fittingly akin to Sandra's predicament. As also told through Sandra's somewhat passive point-of-view, it can be a difficult film to get lost in. Perhaps creating distance was Hansen-Løve's goal, as the film feels very close to her own story. It's ultimately a hard movie to knock, with so many nuances and strengths, maybe just gently deride. Just as, on the other side of the spectrum, Sandra gently (and drolly) derides the animated films her daughter adores as "aggressive." ***

Posted by MrJeffery at 5:02 PM