When I first went to L.A. as a teenager, I was so excited about being there that I wanted to take it all in. I stuck my camcorder out of a backseat window and filmed buildings, houses, streets, people as they flipped by. It was an amazing experience to feel and be in the moment of, but watching the woozy footage later, less so. A camera that's always moving and hustling has been the force behind the appeal and appalment of Michael Bay's work. Roberto De Angelis' kinetic photography in Ambulance rarely (never?) falls on a lingering shot as the colorful L.A.-setting zigzags and flits by through the movie's central high-speed chase.

Heist films and vehicular chase moves can be delicious fun, especially if they are brisk and well-cast, with heroes and antiheroes you care about, or at least intrigued by. But when you are rooting for the police to just end everything already, something isn't right. Part of this is due to Jake Gyllenhaal's Danny Sharp as the ringleader of a bank robbery group. He invites his estranged brother, veteran Marine Will (Yahya Abdul-Mateen II, doing a great job despite a rank script), who is desperate for money to cover his wife's surgery. The heist--a buzzy high unfortunately contained in the early hours of the film--goes very awry, and Danny and Will end up hijacking an ambulance with medical worker Cam (Eiza González) and injured rookie cop (Jackson White) in tow as hostages. Gyllenhaal is usually a reliable presence, and a charismatic one, even when you can see him stretching his skills. Yet, he seems miscast here, or not a strong enough actor to tackle the junkyard script--ultimately too puppy-eyed adorable to feel threatening, despite his yelling and neck-vein popping antics. He also seems incapable of wading into any complicated gradients this character could have. There's a mysterious debonair quality to him at the outset, but by the time he's "stressed" in the remainder of the film in the ambulance, he becomes a grating mess to watch. Someone that can portray a sense of deviousness, malice, under the guise of bulk, like Mark Wahlberg, who starred in Bay's, mediocre, but much more involving day-glo bodybuilder crime thriller, Pain and Gain, may have made a more compelling presence. 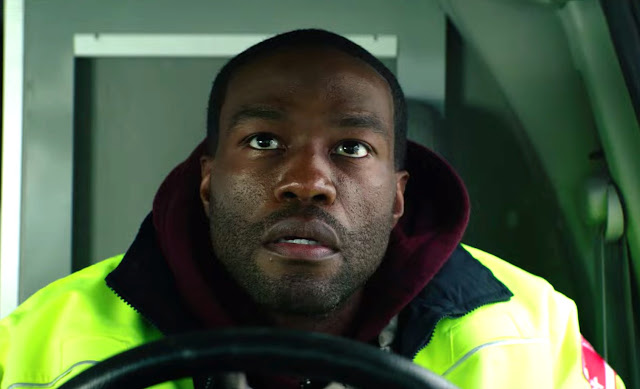 It could be a fault of the film that most of the actors feel so inconsequential and irritating. The movie is so incredibly busy trying to make every proceeding an eye-popping thrill-ride. Busy but boring has been how I've deemed many mainstream movies of late; they seem constantly spinning in motion with noise and stuffed with a lot of action, fighting and yelling, and yet, seemingly going nowhere on any satisfying level. A film like Ambulance, a remake of a 2005 film by Danish director Laurits Munch-Petersen, could have been fresh, slick and punchy on a 100 minute runtime--the way those 90s video rental thrillers were constructed (that this movie is being so wrongly compared to). Bay movies are unapologetically dumb action products with sledgehammer subtlety. In this current climate of waning moviegoing, a movie-lover has to feel some sort of reverence for trying to entertain us in a theater, even if one finds the work pretty dreadful. There's just a dissonance between the speed of which Bay's Ambulance is spinning and its unengaging, lumbering feel at two plus hours. The heavy dose of slo-mo schmaltz the movie piles on in its closer is even more wretchedly unbearable. *

Posted by MrJeffery at 6:50 AM