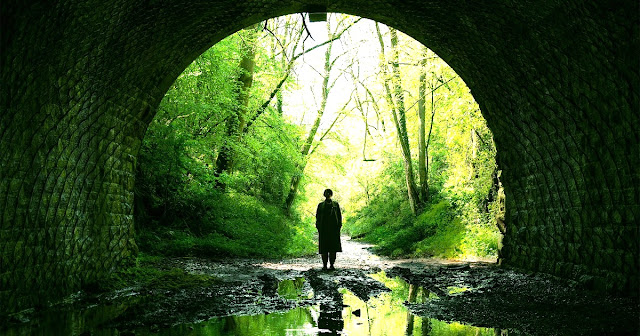 Alex Garland's films (Ex Machina, Annihilation) and scripts (28 Days Later...) are usually effective at painting a splotchy universe of the cryptic follies of humankind and technology. Sometimes, like the film adaptation of his novel The Beach as well, the films of Garland take a sweeping swerve in their second half to something more harshly toned and obliterating. His Men follows Harper (Jessie Buckley) as she escapes alone to a cottage in the English countryside in the wake of tragedy. What's to come seems under the influence of a hazy hybrid of Robert Altman's Images and Polanski's Repulsion, with Harper perturbed by the awkwardly chummy estate keeper (Rory Kinnear playing his chewy role(s) with pizzazz) and encountering strange creeps out in the verdant wilds. The film moves slowly into an abrupt finale of garish horror, with pretty good gore effects, that as in The Howling, a character can only seem to stare and gawk at. Many have written about Garland's overt symbolism (yes, Harper munches on an apple as soon as she gets out of a car and sets foot on the estate's yard) and overt stab at "toxic masculinity." Yet, any sense of the politic, doused in a mix of religious gobbledygook, doesn't come through in an effective way. I left with a weird sense that the film was depicting Harper as unfeeling of mental illness and one deserving to be punished and tormented for her guilt; none of this seems like the message Garland was so hammering in trying to convey. Sometimes films like this linger in the mind, and welcome re-investigation, but the movie doesn't feel vigorous enough to want to return to. So the overall effort ends up muddled and a bit flat, despite some moody moments. I was particularly enraptured by Harper roaming the cozy house and traipsing the tranquil, green countryside; the hallmark scene for me is Harper amused at the echo of her voice in an abandoned train tunnel (the sound design and Rob Hardy's cinematography helps). Buckley is best in these quieter moments. Is that sense of comfort, wanderlust, and isolation deceiving? Is it only effective on certain people like loners and introverts? Men is praiseworthy for those careful creations of atmosphere, less so for its attempt at commentary, paranoia and horror. **1/2

Posted by MrJeffery at 5:57 AM