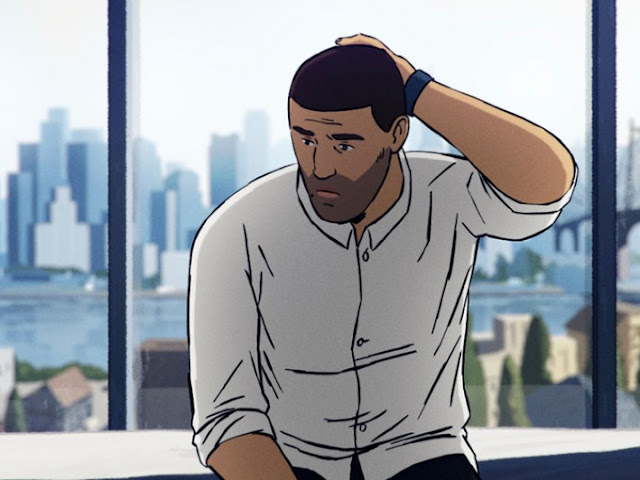 Beautifully assembled of mostly hand-drawn animation, sometimes interjected with newsreel footage, and based upon Danish director Jonas Poher Rasmussen’s friend's life, Flee is a haunting documentary of a refugee's experiences. The film begins with dark lines moving over a white screen, breath, running and solemn strings (Uno Helmersson, who composed the terrific music for the documentary The Painter and Thief, pens another evocative score here; besides the score there are excellent choices in pop music tunes as well). "What does home mean to you?" A voiceover intones. "Home, somewhere safe... you know you can stay and you don't have to move on. Something that is not temporary." 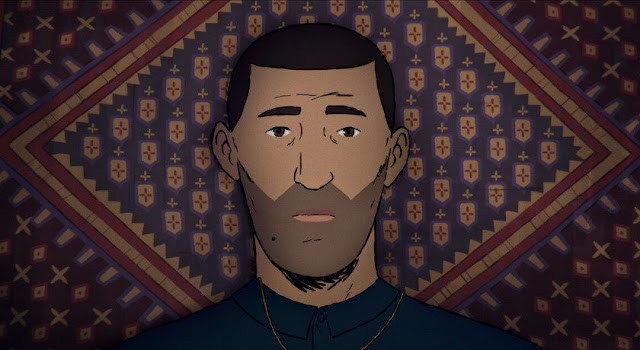 This sense of displacement is an ongoing theme throughout Flee both visually and contextually. Even our "talking head" is somewhat askew, an expression of discomfort on his face. Rasmussen toys with this traditional doc motif by asking the subject, Amin (a pseudonym to protect his identity; a name that happens to be interestingly close to the word "anonymous"), to adjust his posture; what seems to be Amin talking to us straight-on, is actually revealed to be a man laying down, recalling his painful history. In lieu of the idea of running, escape and survival--there's also the aspect of being able to relay one's trauma at one's own "pace." How much does one emotionally feel comfortable sharing and at what speed can they build to a point of unlocking distressing, horrific remembrances? 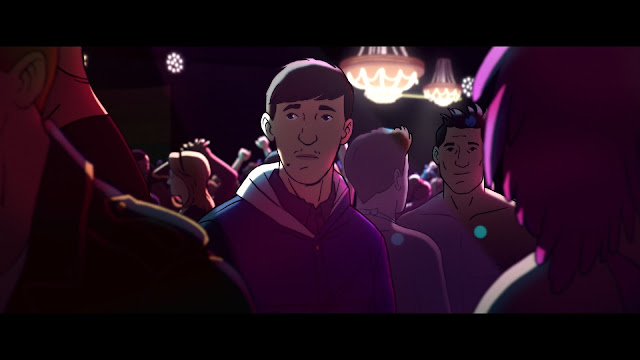 As the narrative illustrates the desperation and despair in the quest for "home," the film can be both serious and playful, like Amin himself. We watch Amin's coming-of-age story and budding sexuality (fantasizing about Jean-Claude Van Damme) as a young boy, wearing his sister's dresses around Kabul, a-ha's "Take on Me" on his headphones. And later, his life in hiding in a rough Moscow after the fall of communism (Mexican soap operas pass the time for Amin's family as they wait to know their fate). The pop references work really well as both a source of joy and dark irony: like a crowd assembled around a new McDonald's in Russia; Roxette's "Joyride" playing as Amin eyes his teen-hood crush; Ace of Base's "Wheel of Fortune" suggesting themes of fate and luck in love paired with Amin's dire circumstances. A frayed portrait of memory, Flee and Amin tell us things that are burned into the mind, and things that are forgotten [a trek through gray, cold dark woods flickers with a moving color of flame and then a child's light-up shoes--a particularly eerie image of consumerism, identity, desperation in hiding inherent within the plight of any refugee crisis). As Amin tells his story at a later age, there is a sense of relief to see he now lives in relative comfort as an out queer man with his fiancé, Kasper. Yet, nothing is perfect, and a certain restlessness still lingers, especially as they look for a new home together. There's simultaneously a certain distance and intimacy to the animation, such as an ordinary scene of showing Amin and Kasper cooking in the kitchen (the familiar, "real-life" tinny sound of docs is there, but the visual is rich and warm and artful rather than mundanely "realistic"). Because the animation is so aesthetically beautiful, it has an enveloping quality of getting closer to the story, especially in its well-crafted, sometimes heartbreaking dramatizations; a small boat of Sweden-bound refugees, smuggled by human traffickers, waving at the towering Norwegian cruise ship, the passengers above gawking with flashes of cameras, is particularly striking and an appalling visual cue of ongoing world-wide injustice and inequalities. Rasmussen smartly stays out of the way and instead paints a compassionate, non-didactic portrait that invites larger questions and revelations of refugee crises of the past and present through the lens of just one man's story. ***

Posted by MrJeffery at 9:38 AM