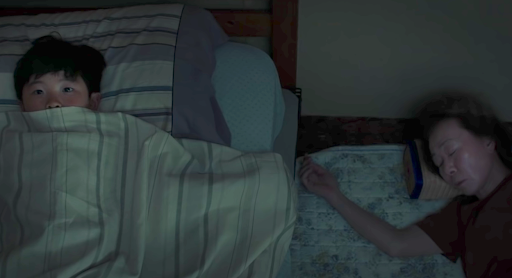 Writer / Director Lee Isaac Chung's Minari moves with a graceful, wavy, yet precise pace. I sometimes pictured the motions of the arms of a conductor in front of an orchestra playing Emile Mosseri's lush score. Mosseri also composed the almost unbearably beautiful music for last year's (has it only been a year ago?) The Last Black Man in San Francisco. Films and film scores like this feel unusual in 2020. There's a gentleness to the story, an unwavering sense of humanity, even in its flits of tension, sorrow, and bitterness. Its goldenrod-tinged photography (by Lachlan Milne) captures a Korean family's new life around the mid-to-late 1980s in Arkansas--in a trailer (a "house on wheels," at first, without front steps) among pastoral, sun-dappled fields--where the father, Jacob, played by Steven Yeun (who was so brilliantly ambivalent in Burning), builds his farm with the "best dirt in America." Even in moments of bleakness [the parents' depressing work of separating male and female chicks in plastic containers within a hatchery--David (Alan S. Kim), the young child, running around its gravelly perimeter], the film is warm with humor. I've been conditioned in this still-young century of indie films to expect the very worst to befall characters, but Minari seemed to be guiding me on a divergent path: one of compassion and promise--in a sense, it's a very American picture. Elements of the Western are here: a man on a new frontier, sometimes stubbornly, staking his ground (here, he is carving out a piece of his own land, without pillaging others, and takes it back from his oppressors—like factory farmers); the covered wagon now a station wagon--a small crack in the windshield; David totters through fields in a red-striped polo, blue shorts, pulled-up striped-at-the-top gym socks (I donned a similar pair as a kid) and brown cowboy boots. Later in the picture, a young friend from church plays country on the boombox, imitates the swagger of a cowboy and gives David chewing tobacco. But I also felt that the film sometimes swayed out of iconography into something more Biblical, ghostly and mysterious. Paul (Will Patton, who manages to not make his wild character a simplistic caricature), a Korean War vet, who brings Jacob his tractor and ends up helping him farm the land, prays mightily, sometimes dipping into tongues, sometimes hauling a cross along a dirt road. He asks for an exorcism of the land--of the past--and its former owner, who is suggested to have committed suicide. 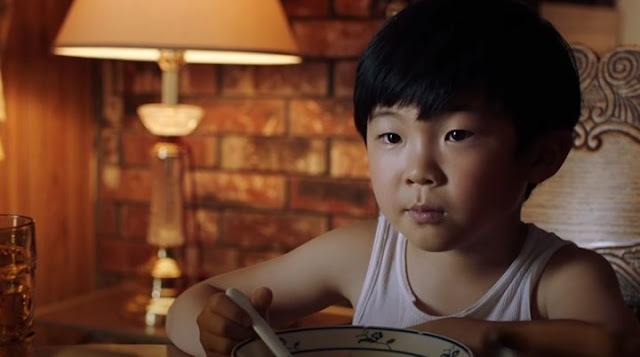 Besides Paul, another character who disrupts, but also quietly (or maybe not-so-quietly) enriches the family, is the grandmother Soonja (Yuh-jung Youn), who, to David, has "a Korea smell" and is not like the "real Grandma" of perhaps his Westernized imagination of a cookie-baking, white-haired smiley old lady of commercials. Soonja is blunt and energetic, teaching her grandkids card games and forcing David to consume a broth for his health (which David humorously turns on her). Monica (Yeri Han), the mother of the family and daughter of Soonja, is immediately unhappy in her new surroundings, and hopes her mother will assuage her isolation. Like any family, nothing is perfect, and people lash out, mean things are said, feelings are hurt. Besides Youn's wide-ranging, piercing  portrayal, Han's performance and Monica's character was particularly affecting to me. In a scene that subtly references the small town's ignorance and tendencies towards belittlement, two fellow churchgoer women ask Monica questions and tell her she's "so cute," and Monica shyly flees. Monica, who within her family, confronting her husband with her concerns, in setting up a swing-set for her kids with rope and a wood-slat, is strong and firm, suddenly becomes another woman here. 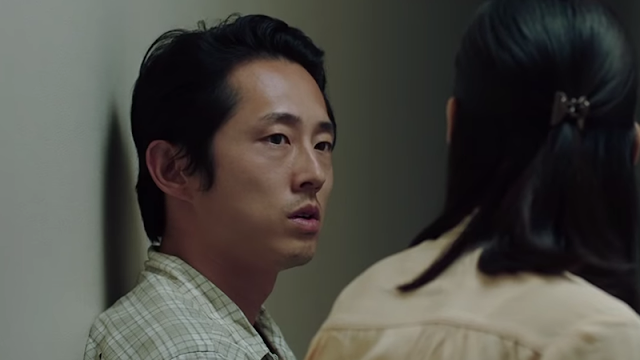 The elements of water, earth, and fire have strong symbolism throughout. These symbols could be wrought with groaning heavy-handedness, but Chung imbues them with unusual implications that drive story and inform the specificity of the characters. The perspective of the film is important and intricately designed--it's mostly felt through the view of David, but there are some side scenes of conversations, experiences, and arguments of the adults out of the child's comprehension. In a small trailer, how can David not overhear so many things said between his distressed parents? And so the natural elements have a sweeping feel, like the fever dream fears of a child: water comes down in a torrential storm--Tornado Watches a scary new reality. Water is lavishly wasted in a bath and then suddenly runs dry--the fields cracked, the tap stopped. But water has more humorous connotations too--in urine and in Mountain Dew, which David claims his father says is "water from the mountains." Weaving these elements together, Minari is about growth, sustenance (the titular plant, next to a creek bed, is described as a substance for rich and poor). It's a film about broken-ness, deterioration, and disrepair and the literal healing of a heart. ***1/2
-Jeffery Berg

Posted by MrJeffery at 8:49 PM