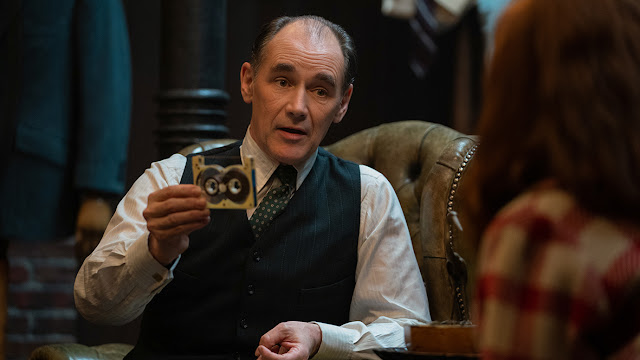 With The Outfit, Graham Moore, the Oscar-winning screenwriter of The Imitation Game, dips his toe in his directorial debut (also written by him and co-writer Johnathan McClain) with a film wildly ambitious in its modesty. It's an impressive feat in a slew of CGI-ridden recent films that are so, so busy yet ultimately empty and tedious. The Outfit all takes place within the confines of a bespoke store in wintry Chicago 1956--its elegance and craft of the highest order of menswear (neatly folded silk and shears clipping through fabric)--and its owner, Leonard (Mark Rylance), takes his trade and artistry extremely seriously. Mable (Zoey Deutch) is his front of store clerk and assistant who has dreamy aspirations of leaving Chicago--for international cities captured in her collection of snow globes. Amidst this unassuming team, the local mob periodically comes in to drop off mysterious envelopes, to which Leonard has been directed to turn a blind eye. Soon, his unostentatious existence gets intertwined into the bloody violence of the mob which leads to a long, tense night.

Moore's textured film, handsomely shot by Dick Pope and edited with flair by the skilled William Goldenberg, is a Hitchcockian yarn that rises above its potential to be merely movie as experimental exercise. Alexandre Desplat's score seems a bit intrusive at first, but its vibrating strings and winking melodies, add to the dark humor and unease. In addition to its lovely crafts (including costumes by Sophie O'Neill and fashion designer Zac Posen), a well-cast ensemble deliver intriguing and believable attributes--keeping the movie taut and visually engaging. In particular, Johnny Flynn shines in a villainous gangster role: his hat askew, oscillating between coolness and agitated testiness--akin to noir-era Richard Widmark. The chemistry between him and Rylance, a very studied and mannered performer, are some of the best, most wickedly involving moments in the movie. The Outfit is an obvious double-meaning title: the menswear outfits Leonard "cuts" and one of the mobs in the movie. It's a fairly corny pairing of course, but Moore's movie so fondly recalls and samples Hitchcock (Rope and Dial M for Murder among them) and is so well-delineated and acted on its modest means, the movie ends up being a sly, twisty, and pleasurable treat. ***

Posted by MrJeffery at 6:37 AM