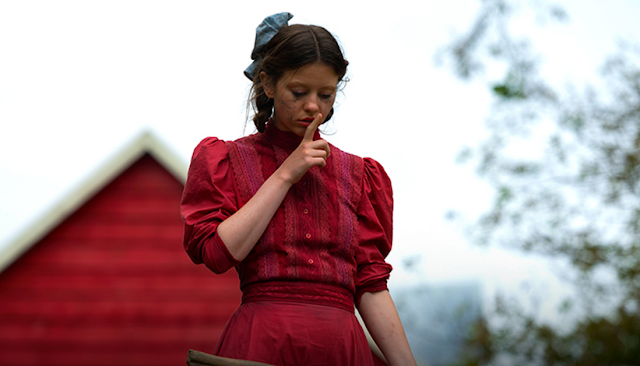 Self-delusion and desperation can be a dangerous combination. This is the predicament of Pearl, the title character (Mia Goth) of Ti West's horror film. It's an origin story of his earlier release, X, a deliciously and unabashedly sleazy, southern fried 1979-set fright-romp. Both movies were made on paltry million dollar budgets, and both films make quite the striking pairing. As melodramatic pastiche, Pearl in particular is so unusual for contemporary movies in its tone and visual style. It's the kind of film that is jarring against the slew of washed out, dimly-lit serious arthouse horror pictures and the branded, jump scare-filled cash grab horror movies I'm used to viewing in cushy recliner seats of mainstream theaters. It's admirable that with both films, West seems to be enjoying himself, creating splashy art he wants to make, with little care for the palate of an imagined modern audience--whatever that might be, as we all seem so splintered lately. But Pearl doesn't feel so self-serving that it isn't entertaining. Its tight runtime and lean tale becomes a pleasurable experience even as it forays to the most unsavory images (a dead pig riddled with squirmy maggots, for example, was enough to make me uneasy). 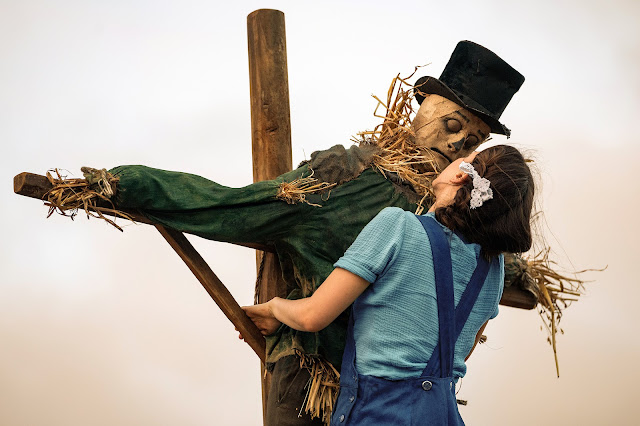 Pearl yearns of being a dancer in the picture shows--she lives on a dull farm in the midst of the 1918 pandemic with her extraordinarily stern, German immigrant mother Ruth (Tandi Wright) and her ailing father (Matthew Sunderland), rendered speechless and of limited movement likely by stroke. Her husband Howard (Alistair Sewell) is off at war. The plot, like its mis-en-scene, is quite stilted and antiquated, set up with its bright, goldenrod photography (vividly done by Eliot Rockett) and screen wipes, like a creaky thirties or forties color weepie. Pearl's character is shot in a very lonesome way, in fields or along desolate roads or among her cute farm animals--her closest companions--that cower from her overwhelming presence. As she rides her bike, she's reminiscent of Margaret Hamilton's Miss Gulch. But West's film and Goth's performance surveys Pearl with an empathetic eye. Both West's material and Goth's turn (who also wrote the film with West) toe that line between zany, zingy caricature and moldy realities. Like Pearl's dead-end existence, the movie can feel repetitive, with the round and around strict mother theme [a trope in horror, most acutely in Psycho [a car sinks in a swamp here too) and Carrie] almost suffocating the whole movie--but that stifling build-up is necessary for the thrills in the later half to feel so stirring.

It's not necessarily an unpredictable movie--it seems to want to ride on and luxuriate in its formulas. Tyler Bates and Timothy Williams' lush, swelling string score aids in that as well. But winky, cutesy moments are offset by piercingly bizarre ones--like a dance with a scarecrow (and its utterly disconcerting face) that goes from goofily Wizard of Oz-ish to macabre. When Goth is given a monologue for the horror movie ages--she absolutely destroys it--the camera lingering on her much longer than what feels comfortable (this sense of the uncomfortably long and the pleasure in the unsatisfyingly unknown was also so tremendous in West's The House of the Devil). Like Todd Haynes'  Douglas Sirk-inspired Far from Heaven, Pearl feels very queer. Unlike Haynes' film, I'm not sure if that was as such an intentional aspect here. But the filmic inspirations, the dashingly handsome symbolic projectionist (David Corenswet) seemingly as promise to break out of small town and small-mindedness doldrums, and Pearl's dresses (and gender queer moments--with a top hat) and misfit nature, her disapproving, Christian parent, are all wound up in a feverish sense of gay identity. Between this and X, West sure is creating an exciting universe within the genre, and showcasing his prowess with period detail and tones of simultaneous frivolity, humor, devastation (that closing shot of Goth illuminates it all, and it is a wow). ***1/2

Posted by MrJeffery at 1:55 PM