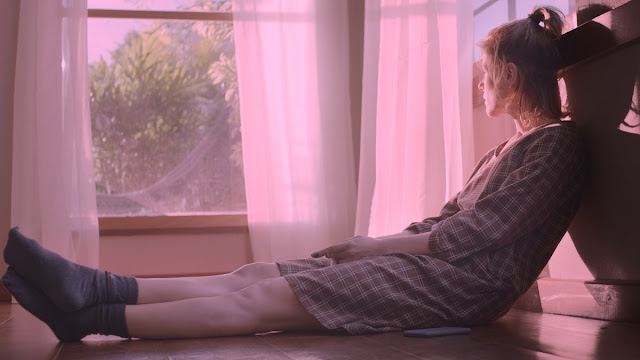 Maybe I need some more time, like several years, to go back to The Pink Cloud. In the midst of a global pandemic, the film is a particularly distressing watch. Iuli Gerbase's Brazilian science fiction movie imagines a strand of pink clouds hovering over Earth that kills humans within seconds, keeping them barred indoors. The story centers upon Giovana (Renata de Lélis) and Yago (Eduardo Mendonça), a pair who have just met for a saucy night of fun who end up quarantined together in a glassed-in, lovely urban apartment as the threat of the pink cloud drifts outside.  Their initial worries are minimal, but their desperation of their own isolation and of their friends and family slowly builds as time passes with no end in sight. We witness the bleak deterioration of Yago's father via web calls. And Giovana helplessly watches a suicide out her complex window; eerily she will later play a game of hangman with another neighbor across the way. Packaged food, including a mysterious pink nutritional juice, and supplies are delivered from the government by drones via "tubes" that etch a sealed-off hole in a window: one of the many searing images throughout Gerbase's movie. The film switches between both Giovana and Yago's perspectives as they circumstantially become closer to one another [a sliding camera montage set to the jaunty "La Vita (Life is Just Life)" by Rowena Jameson, establishes a sense of early domestication] and as their relationship later becomes more splintered and fractured.

As the film is an episodic one, it would be a spoiler to reveal how much time passes within the movie, and the specific ways in which their lives and the lives through their interwebs unravel, but let's just say that you feel the agonizing weight of their existence, especially from the perspective of watching in, albeit less severe, quarantine. Also depressing are some of the actions of people around the world, caught on camera for the news, including a family wishing the pink cloud a "Happy Birthday." I would argue the film is overlong, but perhaps the repetitiveness and feeling of time is the point of this movie as an experience. As with many science fiction films, some of the logistics aren't always explained, the emphasis is more on human response in conjunction with an environmental threat. Adding to the atmosphere and weight is the dim color palate: washed-out, grays with shades of faint rose (the photography is by Bruno Polidoro). The music score by Caio Amon is disarming, "the pink cloud" has its own musical motif: raggedy trills of dissonant woodwinds like the shaggy brass stabs from Creature from the Black Lagoon. The film comes with a preface of "written in 2017" and "shot in 2019," to mitigate its prescience. While it's a difficult movie, Gerbase's vision of this dystopian apartment existence is admirable and appropriately upsetting. ***

Posted by MrJeffery at 2:11 PM