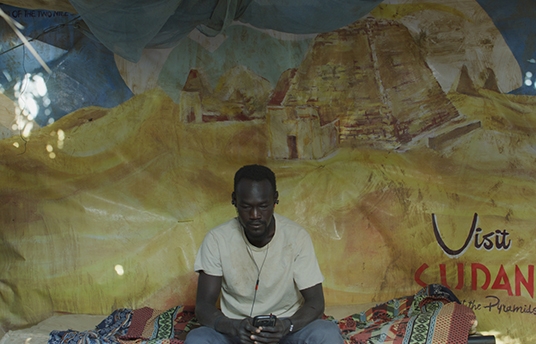 On a sunbaked desert in Sudan, Maher (Maher El Khair) appears, the principal character of Ali Cherri's film The Dam. He silently works among his fellow brickmakers. Meanwhile, a violent revolution is going on in the country. It's on the radio (which takes some tampering with to get reception), on TV. Him and his mates listen and watch, but do not discuss. Off in the distance, on the Nile, the waters of a dam roar--a monstrous development of technology and humankind that in power and scope is in such ferocious contrast to the menial, physical work we see. But there are similarities too--cyclical, ritualistic-like aspects that mirror the daily lives of the brickmakers. Contrast, and some parallels, are found in some of the film's visual cues: the lit-up car of their boss shelling out little (and sometimes no) pay; a tarp painting for tourists of the Nubian pyramids--labor of centuries and centuries ago. 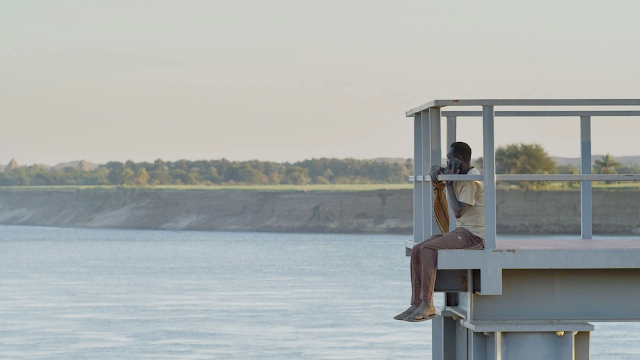 Simmering disquiet and distress, both bodily and emotional, runs throughout and also plays within Maher's own individualistic, yet fablelike tale.  The idea of the fable, with its surreal touches (a wobbly, mud caked mountain speaks to Maher in a shuddery voice in daydreams and nightmares, with twitching branched roots) and visual flourishes are interlinked with Cherri's down-to-earth, near-documentarian presentation (the cast are made up of "non-actors"). Because of global and local events and logistical challenges, The Dam was filmed over the course of five years. The film ends up feeling delicately executed, assiduously edited by Isabelle Manquillet and Nelly Quettier. Some of the movie's quietly stewing anguish is inferred in the subtle use of electronic artist ROB's throbbing score.

Cherri, a visual artist, collaborates particularly well with cinematographer Bassem Fayad. Fayad's work--its play with imagery, with shadow and light, sun hours and moon hours--is often stirring and stunning. There are the most minute bits of movements within still frames (soap suds quietly drifting across the frame until no longer evident; mud moving in the most fine-drawn way, as if captured in prisms of convection, but also unreal as if alive). Fayad and Cherri end up capturing the unearthly in earth itself. ***

Posted by MrJeffery at 6:25 AM