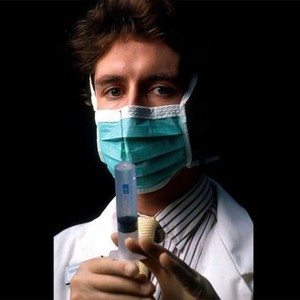 If I wanted to steal someone's identity and profession, a physician / surgeon would absolutely not be on my list. But in Christopher Morahan's eerily unsettling adaptation of John Collee's publishing-dubbed "medical thriller," Paper Mask, that's exactly what the main protagonist schemes his way into and signs up for. Matthew Harris (Paul McGann of 8th Dr. Who renown) plays a lowly porter in a London hospital. After witnessing a car crash outside of a pub, Harris steals the identity of the victim--Simon Hennessey (Dale Rapley)--a doctor at his hospital. The movie moves swiftly through its crackerjack plot as Harris lands a residency at a hospital in Bristol, much to the chagrin of one of its board members (a delightful Tom Wilkinson). Harris, while having a modicum understanding of medicine, teams up with nurse Christine Taylor (Amanda Donohoe), who helps him as far as she can with the occasionally stomach-churning medical mishaps that arise. A romance soon develops between Matthew and Christine, and their symbiotic vibe is both surprising and morally askew. 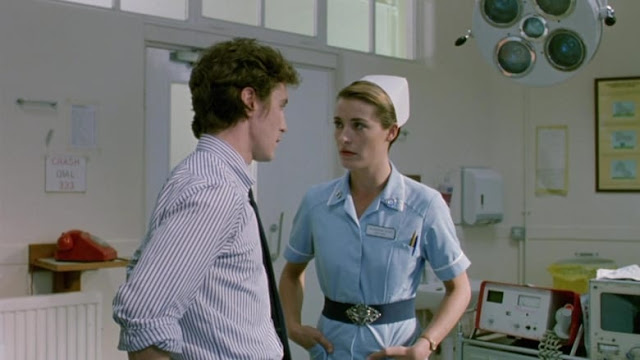 In most stolen-identity thrillers, we usually luxuriate in something flashy and glamourous, not wonkish, life-or-death, stress-inducing states. So maybe that's why as an audience member, I wasn't hoping for Harris to "get away with it." Among the tradition of Highsmith-inspired cinema, while not as sensuous and sweeping as Anthony Minghella's The Talented Mr. Ripley nor as pulpy and devilishly fun as the film versions of Ira Levin's A Kiss Before Dying, Paper Mask is a chilly, straightforward yarn of human perversity. It also shows how far someone without qualifications (or with the "guise" of qualifications) can advance merely by being a sociopathic man. Additionally, the film touches upon how power structures inevitably protect the powerful. The combination of Nat Crosby's dullish-hued cinematography and McGann's plain, unembellished performance (though he goes for a bit of ham singing out The Platters' "The Great Pretender"--an obvious musical motif throughout the movie) adds to the clinical queasiness of the tale. As Harris's foe, Wilkinson injects the movie with bite. ***

Posted by MrJeffery at 1:01 PM