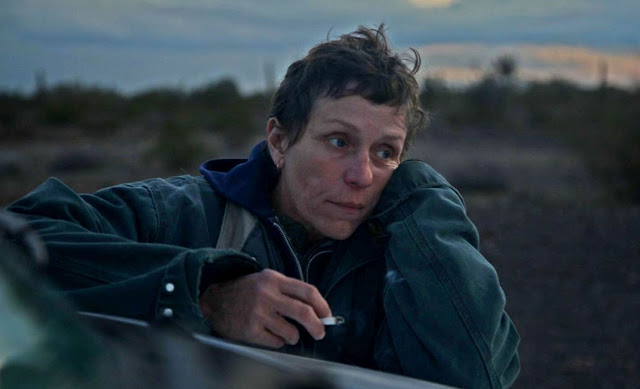 Recently I reviewed Song Fang's The Calming which dealt with journeys of quiet solitude in a noisy world in the wake of personal change. Chloé Zhao's (The Rider) brilliant and haunting Nomadland also deals with similar themes, in this case, with a piercing use of fiction mixed with raw realism. Empire, Nevada, a community built around a sheet rock factory which closed during the recession, ultimately became a ghost town--its zip code vanished, the houses, offices and the dust-covered helmets of factory workers abandoned. Fern (Frances McDormand) and her late husband both worked there. They lived a modest life in a ranch tract house. As in The Calming, we learn certain pieces of characters' lives from the witnessing of circumstance and through storytelling and conversation. 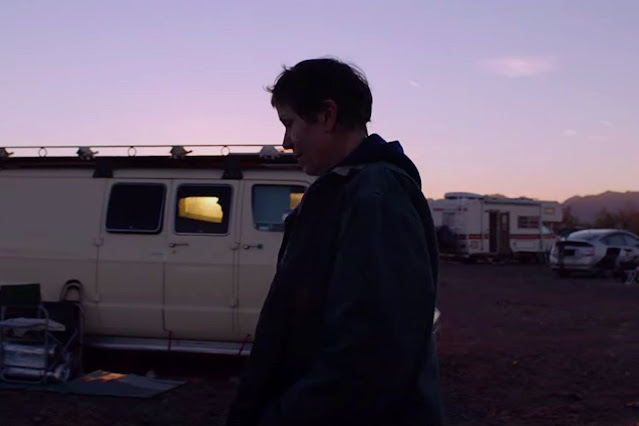 Nomadland follows Fern's way of surviving in the aftermath of Empire and her husband's death, as she lives out of her van, traveling from place to place through the landscapes of the American West, looking for work. We see her taping up boxes at an Amazon factory (its cavernous, gleaming, fast-paced facility a stark contrast to the ruins of Empire), working in a kitchen, helping clean up trash. While mostly living in solitude and oft-aloof, we see her come in contact with other "van-dwellers," like a Vietnam vet with PTSD, at places like the "Desert Rose" RV Park, with other workers, and at one point, some of her family. McDormand joins a cast of mostly unprofessional actors as themselves who are telling their personal stories (Charlene Swankie, in particular, is memorable). Joshua James Richards' moody photography oscillates between the vast, bluish, beautiful landscapes and the extreme close-ups of the film's storytellers. Remarkably Zhao's picture, adapted from a non-fiction book by Jessica Bruder, manages to neither simplify nor pity the characters' experiences. Instead, this is a movie of tremendous empathy and close observation (the movie is carefully and gracefully edited by Zhao herself). McDormand--known for her shrewd performances, intimidating glances--gives her most compelling characterizations here. I am drawn to the intimacy of her turn: watching her listen, touching the bark of a tree, fiddling with a radio, describing the dinner plates of her childhood (one of the few physical objects of sentimentality that she hangs on to--her "counterspace" is her husband's old fishing box), folding laundry, singing "What Child is This?" on a darkening road (her lonely celebration of Christmas). Frances / Fern is singular, distinctive and quietly emotive, but she also blends in with everyone in the picture without any sense of superiority. She can also be sly and funny--short-haired, dressed in a pale navy hoodie and tan vest or overalls, tiny hoop earrings intact--with moments of droll physical and emotional comedy. Even as we experience the pangs of loss and difficulties in the lives of the nomads, we also witness their sense of hope and relationship with nature in their grind of survival. ****

Posted by MrJeffery at 3:13 PM