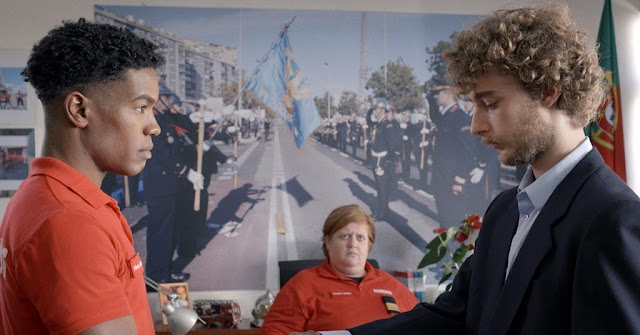 João Pedro Rodrigues’ new film Will-o'-the-Wisp (Fogo-Fatuo) plays blithely and seemingly joyfully with conventional aspects of story, masculinity, eroticism, and contemporary concerns. It's sometimes a musical (of previously recorded tunes--one a cheery 80s tree-huggy television song) / dance movie, sometimes a satire, with rollicky moments of ribald humor. The beginning, with its futuristic jump (here, to 2069) and a man, Alfredo (Joel Franco), in a small room is reminiscent of Edward G. Robinson's death bed scene in Soylent Green. Interestingly, both films end up revolving around persistent environmental anxiety. In Will-o'-the-Wisp, the camera lingers upon a painting by José Conrado Roza while Alfredo farts and a young relative plays with a fire truck (the costuming choice of a weirdly-cut gray sweater seems particularly apt for what could be realistic "future" fashion; the costume design is by Patrícia Dória). The opening moments introduce overriding elements--death, personhood, archness, lingering racist colonialist history--swiftly. The movie then remixes a conventional, self-serious narrative trope "the King" reflecting upon his past (fire truck as a sort of triggering Rosebud) captured in the movie's slim runtime: here, Alfredo's young adulthood as a Prince (Mauro Costa) who wants to be a firefighter. He signs up, much to the disdain and amusement of others. The main titles show his brawny fellow firefighters in drills with an erotic eye (short shorts! shirts that ride up!) as an aria from Mozart's Magic Flute trills frivolously. It's the best sequence in the film--sexy in its matter-of-factness and humorous without feeling forced. The movie's marvelous choreography is by Madalena Xavier (another scene where the firefighters mimic famous paintings nude in the locker room is also a highlight). The rest of the film--doused in obvious ironic flourishes such as commentary on forest fires framed by the glow of palace dinner candles, and a sex scene of crude racial exchanges and dildos in charred woods (a tryst between Alfredo and fellow firefighter Alfonso, played by André Cabral)--will be hilarious to many. Comedy can be as easy to dismiss as "oh, it's just being silly" as it is equally difficult to create. Rodrigues, and co-writers Paulo Lopes Graça and João Rui Guerra da Mata, craft a film that shapes an array of topicalities with foolery. Even Greta Thunberg isn't spared, as a famous speech is repurposed incongruously. The film seems to be saying, can comedy address issues well? Can they address them as well as serious films can? Can films address issues well at all?! Ultimately it's a to each their own movie that flaunts its riskiness. Most of the actors, save for a wide-eyed, stern, butch commander (Cláudia Jardim), are directed a bit blandly--ciphers for the movie's precious wildness. **1/2

Posted by MrJeffery at 9:48 AM