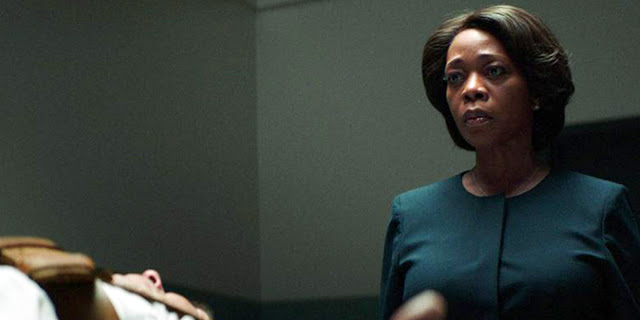 By happenstance, two well-done films about the death penalty, in particular about black male lives lost to this system, have been released over the past week. Just Mercy is a stirring Hollywood studio social drama based upon Bryan Stevenson's advocacy on the behalf of the incarcerated. Clemency, a sobering tale directed with precision and little flair by Chinonye Chukwu, moves in closer to the cogs within the system, centering upon a Warden named Bernadine Williams (Alfre Woodard). The name Bernadine is of French origin, meaning "strong as a bear." We are introduced to her simply and evocatively on the night of an execution. Dressed in a dark navy suit, she is poised, unemotional, and yet seeming to bear the weight of years of wearying witnessing. In the tick of the clock and a beeping heart monitor, the execution turns out to be botched; this is a lethal injection that does not go in the "smooth way" Bernadine is perhaps accustomed to. Suddenly her bearish strength is seemingly shaken. The death sets the stage for the spare title card and Bernadine's character study. Upon the lead-up to the execution of another man, an accused cop killer Anthony Woods (Aldis Hodge), we see moments of Bernadine's resolve and when she occasionally breaks. Her marriage to her benevolent husband (Wendell Pierce) is stilted, she sleeps poorly, she gives into drinking. She, as another character says, is living in "fragments."

Considering its subject matter, I feel trepidation in calling Clemency a "dull picture." Yet capturing "dullness" is Chukwu's strength in this particular study. With the aid of cinematographer Eric Branco, the film is either darkly lit or somberly gray: a white-gray patch of sky covered by a chain-linked fence. The movie is often deathly quiet with some intrusions--the snatches of the sound of protesters outside Bernadine's office, the muted music of a bar, the shadowy metal sounds of the prison, or the warbling electronic score that comes and goes by Kathryn Bostic (one cue, with a breathy, desperate vocal hovering above droning synths, is especially akin to Bernadine's predicament).

We never quite reach an emotional catharsis with Bernadine as maybe we as an audience hope for. Unlike Just Mercy, this film purposely thwarts any sense of hope or uplift. What's done is done and can never be undone. But Woodard brings a subtlety and unique beauty to her turn that's quietly extraordinary. The tenor of her voice, every glance, even a quick little backhanded wave, is flooded with pathos. There is ultimately no actressy, teary, river-rush release, but instead a constant, stringent holding-back. When she breaks into a smile within a drunken state, I couldn't help but feel a tinge of joy, but also sadness, knowing the alcohol would drown Bernadine's stress and pain only temporarily. In a showier role, so to speak, Aldis Hodge brings forth an array of depth and emotion to his character. Both are quite powerful as a duet--characters both entrenched in a sad system from very different angles. ***