portrait of a lady on fire 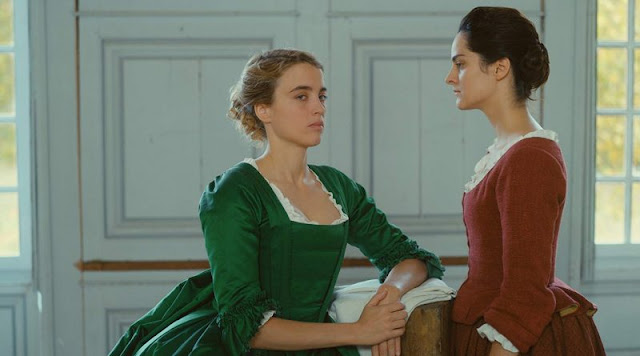 I had to go back and read my 2011 review of Tomboy, before writing this review of director Céline Sciamma's deceptively uncomplicated and breathtakingly beautiful new film Portrait of a Lady on Fire. In Tomboy, Sciamma was able to express deep naturalism and a flair for coming-of-age that felt palpable without falling into familiar tropes. She returns with another singular vision here, a ravishing little tale set around 1770 of an artist, Marianne (Noémie Merlant), commissioned to paint a portrait of a reluctant aristocratic countess Héloïse (Adèle Haenel) who is soon to be married off. Immediately enamored with one another without expressing it through words, the two develop romantic feelings. On daily walks together by sea, Marianne observes Héloïse, trying to absorb her every gesture and expression. Sciamma's slow pacing, deliberate pausing, which can be cloying in most films, really works here in establishing the halting, building passion between the two. 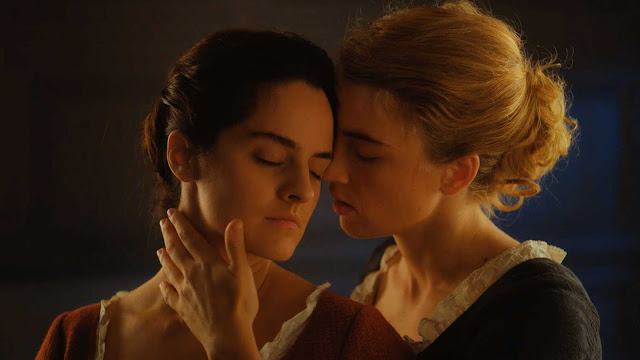 As the story simmers, it's the tactile nature of the movie's aural and visual world which add to its atmosphere. There are distinctive sounds throughout--waves, a fire crackling, brushstrokes and charcoal marks against canvas. As this is a tale told through memory, these sounds indicate the powerful way sound can conjure remembrance. The photography by Claire Mathon (who also shot another compelling-looking pic from this year--Atlantics) institutes a clean, piercing vision. We stay close to Marianne's point-of-view--her eyes on Héloïse, from her back turned in the beginning to a striking profile finale shot. The look of the film is helped in part by the barren sets, seaside landscapes and the two leads, standing out in their exquisite costuming (by Dorothée Guiraud). The paintings in the film were done by Hélène Delmaire. It's really gorgeous work to behold. Just seeing the finishing touches on a green dress were quietly thrilling. ****

Posted by MrJeffery at 1:33 PM