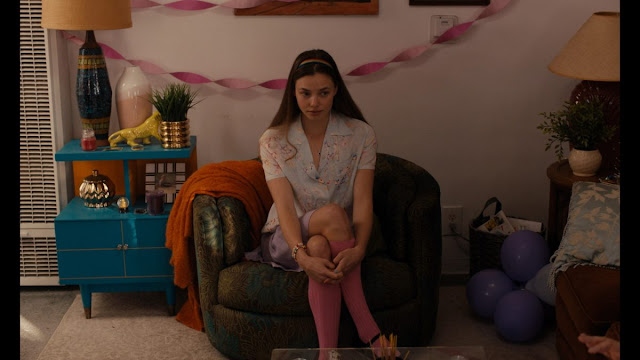 Lena Dunham's Sharp Stick is essentially an L.A.-set sexual awakening story of 26-year old Sarah Jo (a fantastic Kristine Frøseth). Despite the occasional slipshod unevenness of the film--though compact in its brief running time--the excellent cast and their feeling of comradery is palpable.

Sarah Jo is the kind of woman who is left out and ignored--her dynamic sister Treina is an influencer (a hilarious, on-point Taylour Paige). They live with their mother Marilyn (Jennifer Jason Leigh) in a drab, but sunnily-lit apartment complex that she manages. Leigh's turn as this sardonic, washed-up bohemian type who once appeared in Duran Duran videos, is heavenly, tart and a joy to watch. From the dazed, crick-in-her-shoulder dance to Khia's "My Neck, My Back" in the opening scene, to her thorny strands of adjurations for and from her two daughters, Leigh sails with the material. Also strong, surprising and fused with crackling energy is the handsome Jon Bernthal as Josh, the dad of the developmentally disabled Zach (Liam Michel Saux in a great turn) who Sarah Jo helps take care of. Josh is married to pregnant Heather (Dunham), and they live in large, sleek hillside pad. These two dwellings where Sarah Jo spends most of her time in the film, are nicely contrasted; we often see Sarah Jo awkwardly in cramped spaces--her spirit longing to roam wildfire free. In one of those cramped spaces--a laundry room--Sarah Jo seduces Josh, and the two actors run through a gamut of feelings and actions in their characters' complexities--consent, desire, nervousness; it's a wonderful scene. Eventually, Josh and Sarah Jo's relationship heats up and burns up, and Josh introduces Sarah Jo to the world of porn. 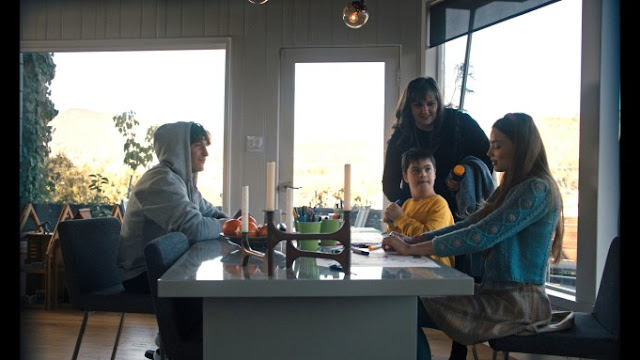 While Sarah Jo's mother and sister express and talk about sexuality freely, they don't expect, nor treat Sarah Jo as a sexual being. In fact, Marylin doesn't even share the joints she does with Trei, telling Sarah Jo that weed will get her too much into her own mind. There are currents of ambivalence in this family: Is Marylin protecting her daughter, or further alienating, dividing her from her sister? How does Trei feel as a black woman in this white family?

These questions linger over a seemingly breezy tale, and as with Dunham's previous work on Tiny Furniture and Girls, reveal characters in all their flawed, messy glory. Even the gregarious, bro-ish Josh isn't treated with as much villainous disdain as a lesser film would. A scene between him and Heather is fervent and well-acted, reminding one of Dunham's strong, underrated performing abilities.

The movie moves into more farcical territory in the latter half, where Sarah Jo's obsession with a ruggedly-hot, neck-tattooed porn star Vance Leroy (Scott Speedman) and her doomed relationship with Josh, spurs the quest to sweep through an alphabetical list of sexual acts (a bit of a retread of The To Do List). This is where the picture starts to feel bumpy and less involving, despite Frøseth's zestful acting. By the end, Sarah Jo's liberation continues with both words of impassioned wisdom from Leroy himself and a promising new beau Arvin (a charming Luka Sabbat). The searing final shot, captured well by cinematographer Ashley Connor (who also shot The Miseducation of Cameron Post), is almost a complete 180 of the haunting, blistering and visceral final moment of 1977's Looking for Mr. Goodbar--one where sexual exploration is integral to a woman's demise, and one where it's integral to a woman's transcendence. ***

Posted by MrJeffery at 9:55 AM