placed placelessness: a review of 'the girl and the spider' 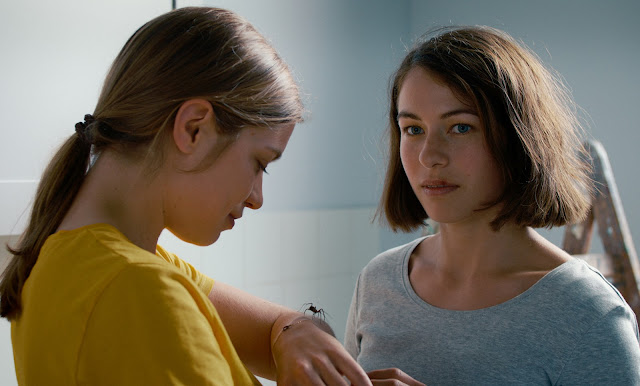 The Girl and the Spider plays like a nightmare for introverts. The film is mostly set in two apartments--one being moved out of, one being moved into--where doors are open to rooms, hallways, and opened by others to intimate situations with every conversation quietly observed by someone else. There's also the cacophony of dogs barking, a baby crying, the occasional jackhammer, discordant piano fumbling, and talking, talking. One might want to escape all of this, curl up in a ball and cloak the windows, like the eccentric downstairs neighbor in the picture, who sleeps through the day and only emerges at night for workouts, staring at the shoulders and back of the head of another gym-goer with furious spite and contorted desire. Swiss twin brothers and writer/directors Ramon and Silvan Zürcher helm a film with an almost bewildering sense of contained wildness, tensions, details, cutting dialogue and observations. There's a feeling of crafty witchcraft inherent in the tale and in its visuals too (the crawly little spider of the title, the pools of red wine that drip ominously and blood-like from a tabletop, a dreamlike flash of a lonely old woman dancing on a roof in a windy thunder and lightning rainstorm, as if summoning the spirits of the night). 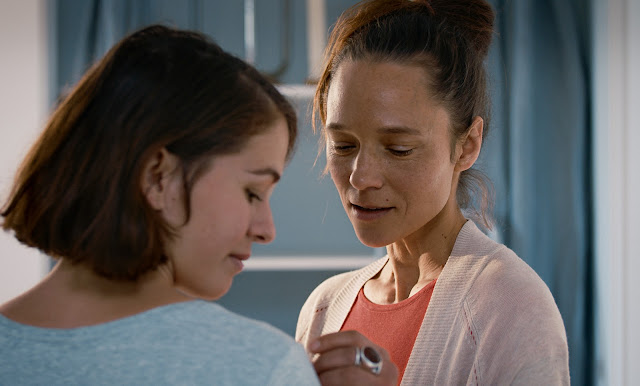 Mara (Henriette Confurius) is at the center of these forty-eight hours of moving: days of uneasiness of both chaos and attempted order. Lisa (Liliane Amuat), inferred as Mara's former lover, is the one moving out, and into a new space with another roommate. Mara, with her piercing eyes, a cold sore upon her lip, physically suggests both her mischievousness, steeliness and her wounds while recalling the fleeting joys and terrors of her past (glimpsing Lisa for the first time in a park; a spider that crawled about in her childhood bedroom). These moments are described through dialogue or presented visually in compact, but haunting and mysterious ways. Other characters too, Lisa's mother (Ursina Lardi), the neighbors-- in the new and old flats--recall stories as well. The blueprint of the new apartment, one that Mara re-creates, is presented as clean and orderly, scrambled, orderly again, and ultimately drenched in wine. It's as if Mara, shown as a talented artist as well, is trying to control this new existence that's out of her hands by creating it, destroying it, remixing it, abandoning it. Meanwhile, the days pass on, and in one eerie scene towards the end, a sunlit room quickly darkens into evening. Time is ultimately the controller of this universe, and Mara, despite her cutting jabs and mischief, can only do so much before all of this will be over, and she will have to exist onward somewhere else. Confurius gives a completely excellent and absorbing performance as Mara. I was so drawn to her character, despite some of her loathsome antics. She is the mesmerizing axis of this film. She centers the picture but also upends it constantly. 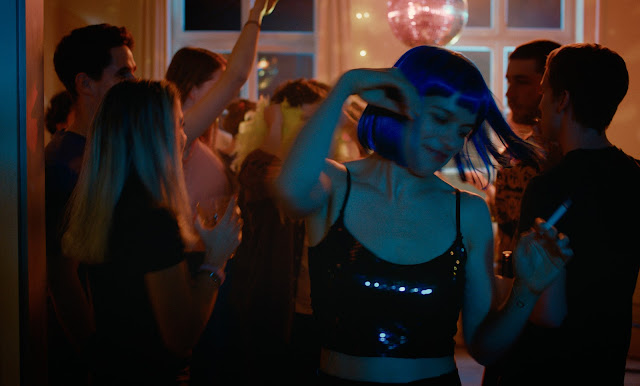 The score by Philipp Moll is fascinating. It incorporates a lavish, tuneful, waltz-like theme that has a comic, absurdist quality. It trills throughout. A piano riff will occasionally enter, physically played within one of the apartments, but also as background music. I recognized the music at first, wondering, what is this again? And then realized it was the melody of Desireless' 1987 worldwide dance smash "Voyage, voyage." Astrid hums it at one moment, perhaps thinking of lost love or joy from her own past. Soon the song is played outright, the perfect upbeat yet melancholic accompaniment to the tone of the movie, but also encapsulating its themes of searching and traveling. It also nods to a fable-like myth within the film of a woman who works as a maid on a cruise ship; her life is in the state of placed placelessness that the film evokes. 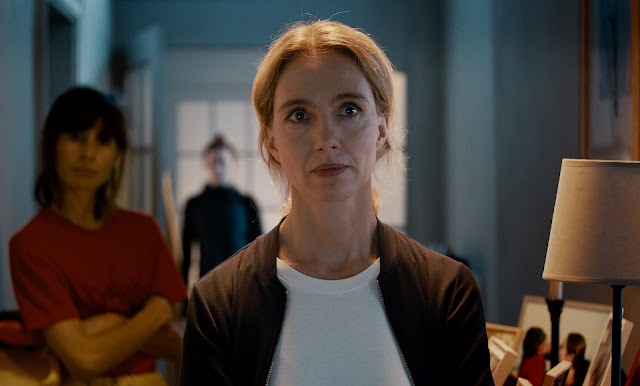 The editing by Katharina Bhend and Ramon Zürcher is impressively nimble in its way of constructing a tale of constant motion, sound, and reactions. Also commendable is the art direction by Mortimer Chen and Sabina Winkler. Supposedly the apartments were constructed from scratch, and the visual play of both of them feel beguiling and authentic. Alexander Haßkerl's photography is crisp, almost uncomfortably clear, and its harnessing of light is enchanting. 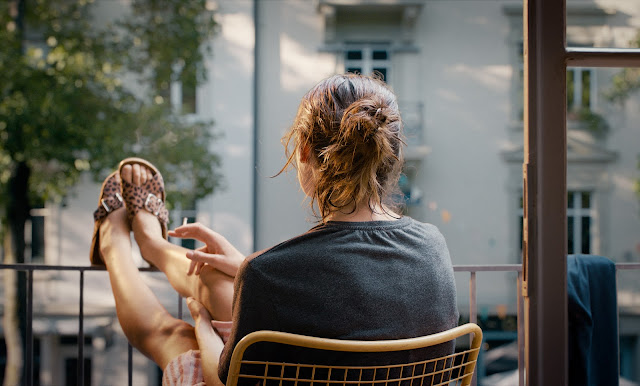 A review of this film on first viewing almost seems inadequate, as the Zürchers' script is rife with boldness, trickeries and symbolism. Repeated journeys to this messy world will probably spark new ideas and discussions. It's reminiscent, in a way, to some of Rohmer's films: I'm thinking of Tale of Springtime in particular, for both its mood, its irritations and its nail-biting instabilities and sexual and emotional tensions. For anyone especially captivated by films about human behavior, The Girl and the Spider, is thrillingly satisfying as a movie in its eternal dissatisfaction. 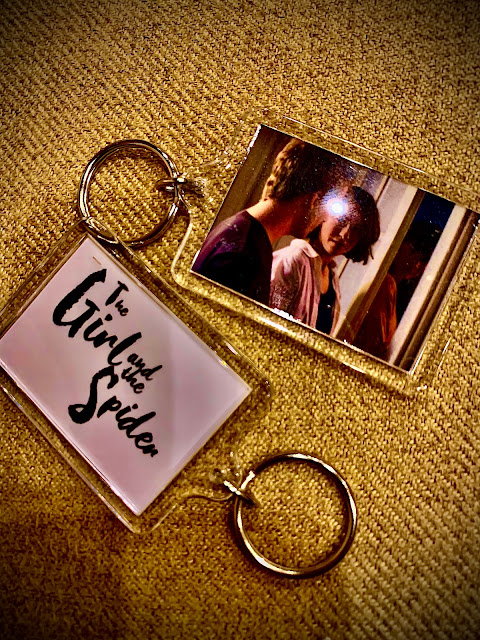 After my screening, I picked up a couple Girl and the Spider keychains in a bowl outside of the theater. They are fitting promotional tchotchkes to attach to a ring of keys that could unlock doors to new homes and old homes, and an ironic one for a film with doors wide open to everyone. ***

Posted by MrJeffery at 2:53 PM