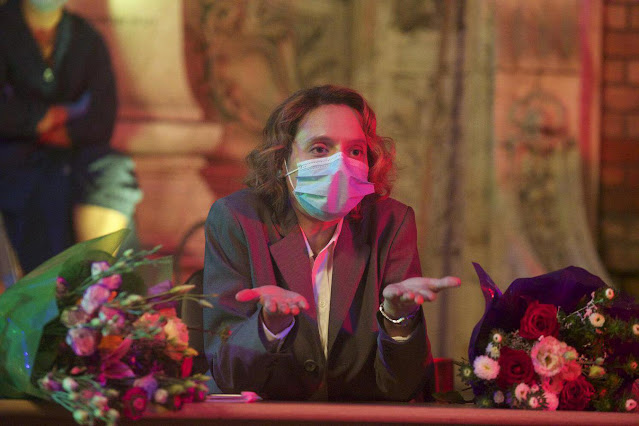 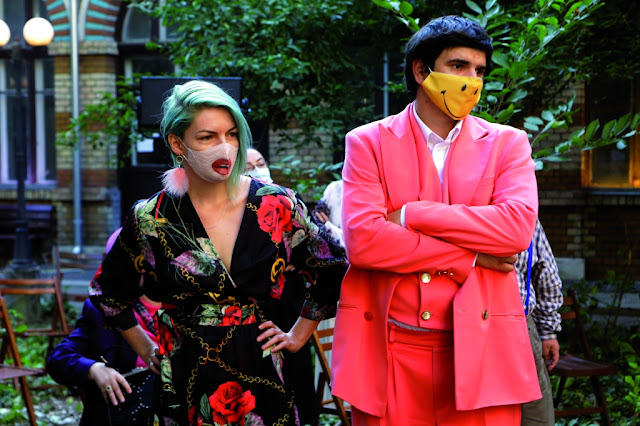 Jude's picture follows a respected history teacher Emi Cilibiur (Katia Pascariu), in jeopardy of losing her job, after a sex tape of hers leaks online. This is the main plot point slivered into sections--including the movie's ultimate trial-by-school-jury sequence, and a visual and aural odyssey of an array of aphorisms and witticisms. Hot pink title cards announce the next thematic and situational swerve. 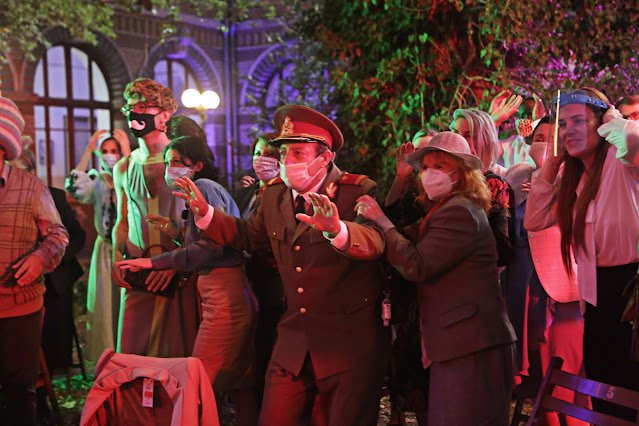 Set in current Bucharest, the most riveting journey for me was watching Emi walk through the city streets with various stops along the way (a bookshop visit to purchase Spoon River Anthology; an unpleasant grocery detour; and a request at the pharmacy for a single Xanax). It's such a stirring portrait of urban life. Cities in modern cinema are often portrayed either extraordinarily bleak and gritty or extraordinarily sleek and pretty. Most, if not all, cities, in all its people, billboards, buildings, trash, and vehicles, lack an overriding, continuous aesthetic. Here, Jude and cinematographer Marius Panduru's camera reveal the incongruities of Bucharest--religious books displayed with Disney backpacks; plastic toys; huge vehicles parked on sidewalks; nauseating music and sirens; hostile customers and fast food conglomerates. Almost overwhelming on first viewing, I would love to return to this sequence alone, to take it all in, the rich visual layers of it, as the camera glides to and fro, some of the people on the streets gawking (and performing) as Emi walks on and around, seemingly going nowhere. 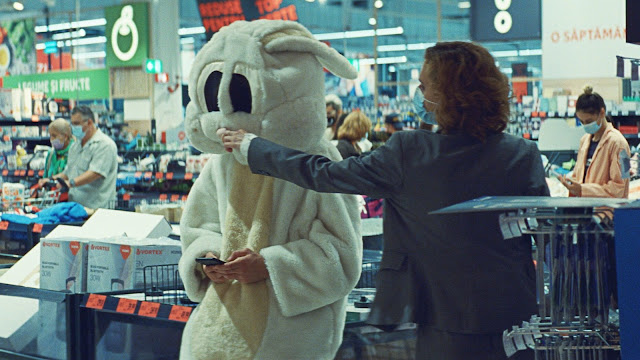 The sad underpinnings of Bad Luck Banging or Loony Porn are not only that its people are in the middle of the pandemic (masked; buying flowers for the sick and the dead; or lashing out at one another), but also, the relentless unease throughout--the feeling of an unresolved violent history that's been paved-over and reimagined with exalted heroes, rotted-out materialism and glinting nationalistic pride. This could apply to so many places and countries. I felt a different sense of reckoning in Ryusuke Hamaguchi's haunted (by many different aspects) Drive My Car, where we see modern Hiroshima. In Bad Luck, especially in the trial scenes, we watch characters twist themselves into sanctimonious speechifying pretzels over hang-ups about sex, history, racism, technology and politics. It's a splashy finale, and one can feel the ebullient sense of freedom Jude has with the material, even if its still all maddingly frustrating and ongoing. ***