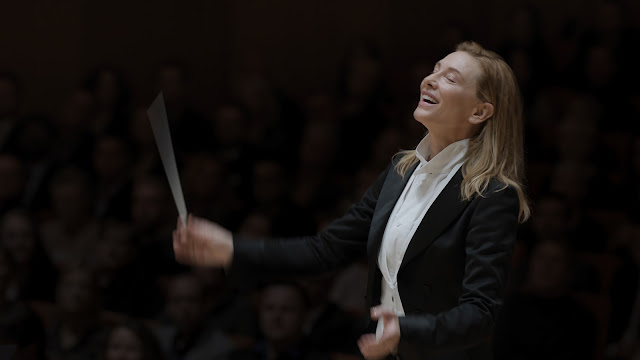 A few weeks ago, I first saw the teaser trailer for Todd Field's film Tár, curiously in front of the 3-D version of Jaws. When the thunderous music of Mahler kicked in, a group of teens in front of me started mimicking Cate Blanchett's character's exaggerated conducting with mocking glee. Weeks later, in the very back row of a crowded audience at Alice Tully Hall, in close proximity to many moments of which Tár takes place, the film was introduced by the executive director of the New York Film Festival who asked for patrons to keep their masks on during the screening. A grouchy, elderly man in front of me shouted out, "Where's yours?!" So there this film landed in this post(?)-pandemic era, at least a post(?)-lockdown era, where a (likely) mostly privileged crowd is packed in, and Cate Blanchett (who the grouchy old man attempted a cell phone pic of, zooming in from afar onto her glowing face, striking bangs and black dress) appeared onstage for a brief moment beforehand, telling us the importance of the big screen and of being here. Are movies, especially bold character studies like this one, made with such precision, becoming just as niche as orchestral performances of classical music? There are similarities between the grouchy Upper West Side type and the mocking teens at the cushy reclining-seated New Jersey AMC: both united in trying to make a splash, a scene from their seats in the dark by the light of the screen before anything really begins. At my screening, especially with the film's opening of a live, wry Adam Gopnik New Yorker staged interview of Blanchett's title character, there was a heavy air of commiseration, of immediate understanding of and maybe desire for some aspects of Lydia Tár's particular artistic successes (to be an EGOT; to have a book about oneself published by Nan A. Talese). I was in an audience in the dark watching a movie scene of an audience in the dark watching a luminary onstage.

Field's movie hones in on a specific character of a specific milieu in a "real" space. That's not unusual. Yet, unlike other movies with fictional presidents or fictional characters of considerable, renowned success, somehow, perhaps through its specificities, Lydia's story as a world-famous conductor and composer feels plausible. It doesn't deny the existence of others in the field, in fact, it constantly references them, including the controversial James Levine. The movie is clearly rooted in present day, where orchestras are able to gather once again after a length of time, where mobiles are ubiquitous and sleek cars are getting smoother and quieter. As Lydia treks between her homes in New York City and Berlin, where she is set to conduct Mahler's 5th for a major performance and recording, we see a woman of determinism, power, and considerable wealth. Even her subpar flat looks magazine-ready with monochromatic schemes and burgeoning, but excessively tidy, shelves of books. The dwellings, including the symphony hall and cozily posh restaurant spaces, become intrinsic to the story's atmosphere and Lydia's continuous sense of hushed comfort. She moves through these areas with a keen sense of ease, knowing just where to flick on or off the lights, or, in a ritualistic way, how to light candles and start her work composing on a grand piano (Hildur Guðnadóttir wrote the score: a small melody that gnaws away at Lydia throughout the movie). That's why it feels so startling when Lydia starts hearing sounds (some, in a genius stroke of design, seemed amplified on one single side of speakers that had heads a-turning)--from an irritating, mundane doorbell riff to curdling screams in a desolate park. Hearing (music) suddenly goes from pleasurable to unnerving. Soon, as evidenced in a Julliard master class scene and the icy ignoring of a desperate former lover, Lydia's cruelty and denial eventually becomes her downfall. Through Blanchett's towering turn in nearly every frame of Florian Hoffmeister elegant, heightened photography, this downfall feels acutely colossal.

Field's script is extremely impressive, giving Blanchett rich monologues to spin on and some chilly statements and retorts. Even though it's quite a dour tale of a perfectionist unraveling, it's blended with heaps of humor. The film has an understanding of genre, from thriller to the sobering, realistic drama to cryptic melodrama. In the Julliard scene, one of the greatest-written moments in the movie, Field's Lydia bounces from Bach to Jerry Goldsmith, and runs headstrong into the briar patch of representation in the classical music world. Lydia's biting humor, genius but sense of superiority makes her troubling, wrathful take on the situation all the more ghastly. There's a rampant joylessness to Lydia--she can be sinister and vindictive in her "transactional" relationships, including with her assistant Francesca (Noémie Merlant), who she strings along and emotionally manipulates, and also the first chair, Sharon (Nina Hoss, in an impactful supporting performance), of whom is also her romantic partner. But then again, Lydia also displays moments of warmth: she drives her daughter Petra (Mila Bogojevic) to school as they belt out song (counter to that, Lydia has a Hand That Rocks the Cradle-inspired moment with Petra's bully); there's also her sense of adoration for music, at least music she likes: as the orchestra's final note recesses into silence, she closes her eyes and brims with a rare smile. Her work isn't all romanticized--it's about drab boards and coldly replacing people. The job of the conductor is a mixed one of vital importance and inflated importance. Often the conductor's name is bigger on the album cover than the great composers they are conducting (an album shot scene with Blanchett in the movie is particularly amusing). But it's also the Maestro / Maestra's job to meticulously enact the composer's work with their instrumentalists through listening, emotion, physicality, and rehearsals. As displayed with the cool use of end credits in the beginning, Field pays tribute to the players of his own symphony.

Like the film, Blanchett mixes a sense of naturalism with knowing flamboyance. As with DeNiro in Raging Bull, Blanchett's turn is a lightning-in-a-bottle centerpiece performance of the audience watching a centerpiece performance that still goes to the bones of the character. As Lydia's ticking metronome-bomb ticks, the film unfurls and curls back up and unfurls again. It's not about the lurid satisfaction of how will Rebecca De Mornay's menacing nanny Peyton get away with her antics in Hand That Rocks the Cradle, it's the lurid satisfaction of wanting Blanchett's Lydia to get caught, to get her comeuppance. Field is too smart though to make that comeuppance pat nor completely satisfying. He ends up landing Tár in an unexpected place, with a shivery, unnerving coda. The grouchy man squirmed and dozed in his seat as the film wound to its conclusion and I watched another audience in the dark who seemed to want to run away from reality, from themselves, and I thought of how so many are searching in front of our screens, for entertainments, in our immensely fractured world. ****

Posted by MrJeffery at 8:59 AM