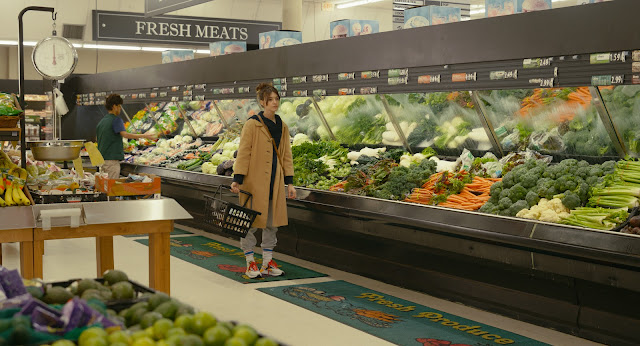 Who exactly is Steve--the "mist-ery" man (Sebastian Stan) drumming up a meet-cute in the produce aisle? Director Mimi Cave and Writer Lauryn Kahn's horror trip Fresh takes on the perils of online dating, from awkward minor awfulness (especially the behavior of men) to an ultimate plunge into the very worst and unimaginable. From the jump, there is a foreboding concentration on food and flavors--among them, cherries, cotton candy grapes, nectarine, and short ribs. Also, through the uneasy camerawork (by Pawel Pogorzelski of Hereditary, Midsommar), we know something isn't quite right about Steve and Noa's (Daisy Edgar-Jones) sloshy date night, despite their cutesy banter. Soon we are taken to a cavernous home with no cell service and suddenly, another half of the movie snaps in place. 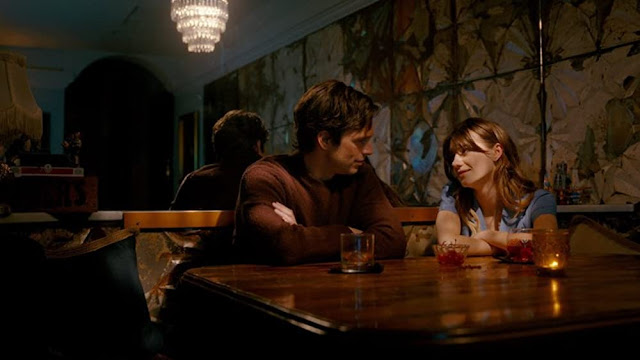 Cave's film harnesses the sleazy 70s drive-in movie vibe and the winking social commentary of early twenty first century horror. Pogorzelski's photography is faded and dark, not too slick, despite its gleaming pops of cell phones (well-used here in moments of humor and suspense, as sometimes they are just gratuitous in other movies). The film is full of comic flourishes too. A rampant use of trippy pop and soul music cues: take a piece of me, a lyric flares while Noa's likable best friend Mollie (a fun Jojo T. Gibbs) searches images of plastic surgeons. Sometimes it goes a little too far into the corny territory: like a cheeky dance sequence set to Animotion's "Obsession" or a sunlit run to Lou Reed's "Perfect Day"--a little too pat and a little too faux Patrick Bateman. Nevertheless, despite a few flaws and a baggy runtime for the material at hand, Kahn's twisty narrative, fine performances and smart references make for a good, stomach-churning, crowd-pleasing romp. ***

Posted by MrJeffery at 1:13 PM