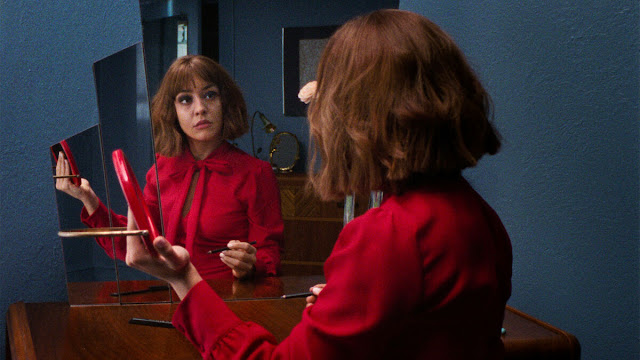 With elements of Brian DePalma's Sisters, Erin Vassilopoulos's twisty Superior dives into themes of duality, identity, and bonds between twins (played by Ani Mesa and co-writer Alessandra Mesa) with stylish flair. To show their divergent personalities, Alessandra Mesa's Vivian is the uptight, homemaker type who schedules everything out, including sex with her husband Michael (Jake Hoffman); Ani Mesa's Marian is the more carefree spirit, in a punk rock band. When Marian, on the run from her abusive partner Robert (Pico Alexander), shows up unexpectedly at Vivian's house, both of their worlds are upended. Luckily Vassilopoulos smartly blurs the lines, visually and thematically, between these two women in unusual ways as they "switch" lives, and take on one another's characteristics ("you make my memories," one of them says). Even as I write this review, reflecting upon the film, I've mixed up the names between the two! 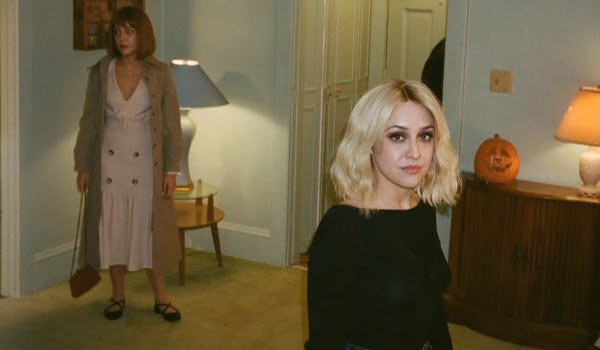 The movie is a thriller, in some ways, and also a drama of clashing personalities and survival. Set in October 1987 and shot with the grainy-feel of 16mm (the photography is by Mia Cioffi Henry; interestingly, a camera figures as an important use of self-defense), Vassilopoulos employs some of the visual and thematic panache of Almodovar (red! - the header picture of the red dress and the mirror is one of the more exciting shots in the movie) in a bland, wintry New York state suburb. I'm not sure if these visual choices were intentional homages or not, but a range of influences feel naturally woven within the film. A shot of a character running on a foggy night bridge reminded me of Tobe Hooper's 1986 Texas Chainsaw Massacre 2.

Even though the movie, and its lapses into nightmarish visions (wolves on the prowl) is a period piece, its more suggestive of the era, more of a mood / dream piece than a completely accurate depiction (Blues Traveler and Matchbox 20 albums are visible on a CD jukebox). The looks and costuming (by Allison Pearce who also worked on Black Bear)--acid wash, jump suits, high-waisted pale denim jeans and oversized white sneakers, severe bob haircuts are fun to look at, but not distractingly flashy. The music by Jessica Moss enhances the atmosphere, as do, with the help of music supervisor Dan Wilcox, the well-chosen songs like "Spacer Woman" by Charlie and My Bloody Valentine's "Soft as Snow (But Warm Inside)." The sets look as if the crew shopped rural New York state second-hand shops to dot the wood-paneled interiors of the sets. This isn't necessarily a bad thing, as this film has a low-budget charm. There's some humor too, with both Ani and Alessandra's appealing performances, Hoffman as uptight husband and the promising Stanley Simons as goofy ice cream shack manager. While the film is an entertaining one, there are deeper themes of escaping trauma that make it feel more substantial and mysterious. ***

Posted by MrJeffery at 8:13 PM