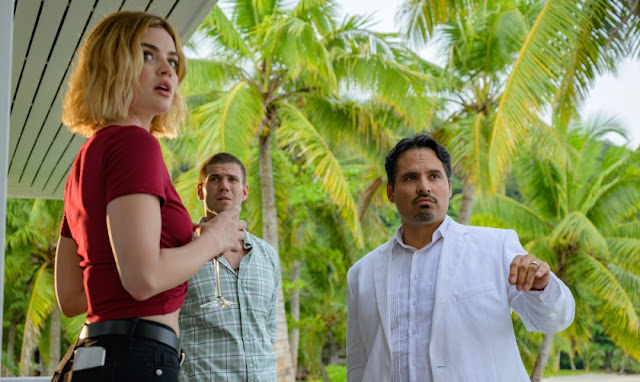 If the vintage TV series Fantasy Island, like many Aaron Spelling projects, offered comfort and projections of aspiration in the late 70s and early 80s, Blumhouse's Fantasy Island--a twisty, sludgy thriller landing in the wake of a new decade--offers an unending sense of unease and swoops of corny comedy. Directed by Jeff Wadlow, with little visual complexity, the movie is, in a way, an off-brand Diet drink version of Fyre Festival docs and the winking, winding, genre-play horror films of the past few years from the Blumhouse brand. 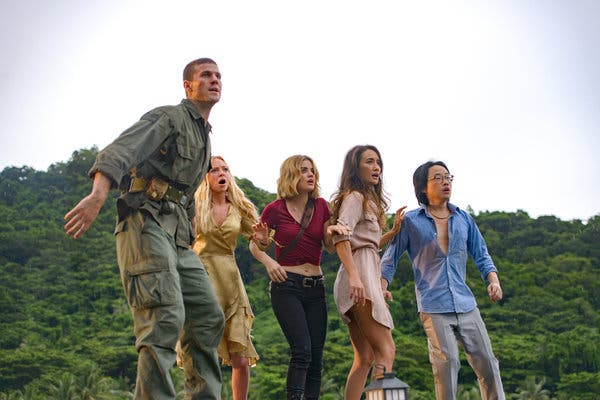 The plot requires leaps and bounds of suspensions of disbelief, which I can usually roll with, especially in a movie like this, but Fantasy Island is patently so creaky, it quickly loses tension and interest. We meet a group of contest winners--Melanie (Lucy Hale), Patrick (Austin Stowell), Gwen (Maggie Q), and two cringey, dude-bro friends Brax (Jimmy O. Yang) and J.D. (Ryan Hansen)--who are ushered into Fantasy Island by the mysterious Julia (Parisa Fitz-Henley) and the island-owner Mr. Roarke (Michael Peña). On Fantasy Island, Mr. Roarke is here to make your ultimate fantasy come true! From here on out, the plot swings into alternate realities and timelines ensue. 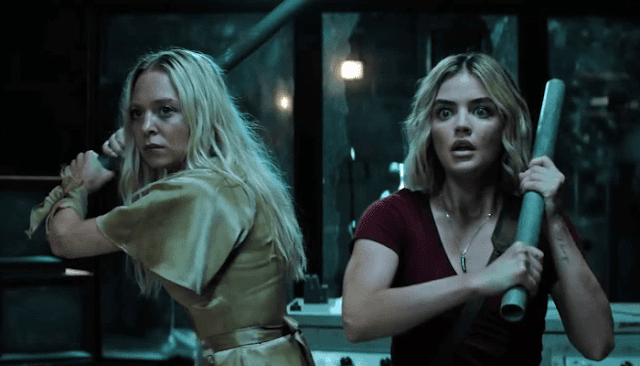 The appealing cast--giving their all, despite the muddled script (by Wadlow, Chris Roach, Jillian Jacobs), the lush locales (shot in Fiji) and the continuous, rigorous tossing and turnings make Fantasy Island a sort of entertaining curiosity in the current cinema landscape. Yet, at a 109 minutes run-time, the jig runs thin fairly quickly. Patrick's story-line--his wish of being a soldier--is particularly lugubrious. At times, I was taken back to the strand of characters in island-set peril in Irwin Allen and James Goldstone's When Time Ran Out... Watching Fantasy Island, I yearned for 1980 simplicity or even Aaron Spelling-soft-core corn. Complicated genre pictures are welcome, especially if one has the skills of Jordan Peele, but the rip-offs that have paled in comparison are a chore, especially when swabbed with bad sentimentality. Wadlow impressively hobbled this together on a mere seven million dollar budget, so there will probably be more on the horizon. If you do choose partaking in this feeble adventure, I do not suggest making a drinking game out of taking a sip anytime someone says the word "fantasy." *

-Jeffery Berg
Posted by MrJeffery at 10:19 AM