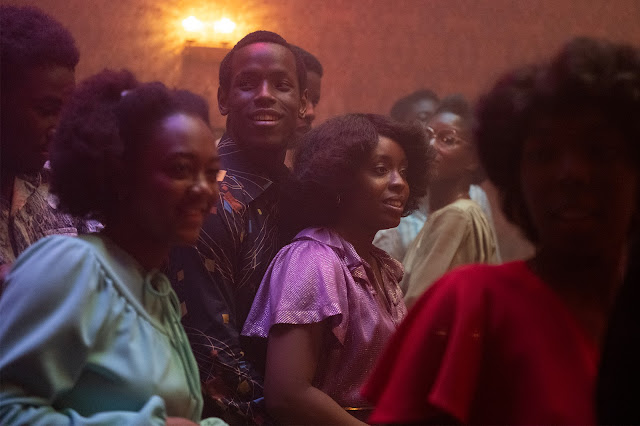 After watching Steve McQueen's "Lovers Rock," I was reading Langston Hughes and came across these lines from his poem "Harlem Night Club": "Jazz-boys, jazz-boys,-- / Play, plAY, PLAY! / Tomorrow.... is darkness. / Joy today!" The sensuous dance party held in "Lovers Rock" encapsulates a fleeting, joyful party in a particular moment in time. Even within the party, as undercurrents of disharmony and moments of distress arise, we know paradise can't last forever. "Lovers Rock" is a gem within McQueen's Small Axe series, about the Black West Indian experience around 1980. 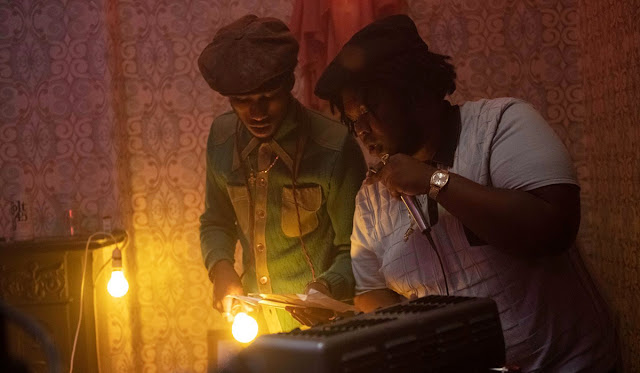 I have been a fan of McQueen's work, especially 12 Years a Slave which, despite being a story that had been told before and despite its subversively old-fashioned presentation in the vein of familiar "heroic" white cinematic tales, was still a  startling movie and one that struck like a bolt of lightning in the middle of 2013. I was enraptured too with both Shame and the very underrated Widows, both of which didn't get the same galvanizing response from audiences and critics, but offered similarly complicated characters and unflinching subject matter within rapturously specific tales that few films of today offer. There is something broadly painted about his films, yet so honed-in and microscopic. 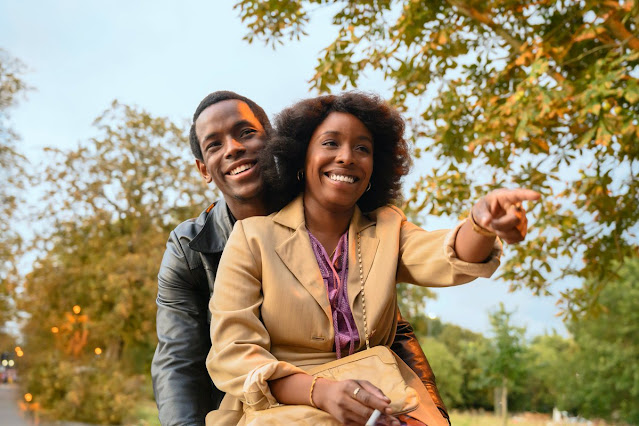 "Lovers Rock," a day into night into the morning after piece, begins with a train moving through darkness akin to a rolled-up carpet we see being moved for the dance floor. Much of the opening, elegantly filmed, is the set-up for the event in bay-windowed sun-glinted, paint-chipped interiors, elegantly filmed (photography is by Shabier Kirchner). Immediately we are eased into the rich, transporting sound mix. Women in a kitchen preparing food happily singing "Silly Games" (an overture to an unforgettable, what's-to-come centerpiece moment of the film). Young women gleefully singing Blondie's "Sunday Girl" with handclaps. The textured sound of flipping through papered-45 sleeves. Getting the sound-systems and speakers right and the echoing mic checks. Usually I am sensitive to and irked by the over-amplification of the rustling sound of burning cigarettes / joints in films (a phenomenon in indie films of recent years), but here it doesn't seem superfluous--its intrinsic to the atmosphere. As the film moves to the party, the lighting morphs to a rosy orange glow, a bulb hung around the DJ's neck, and here we begin to see the frictions (big and small) between men and women in a social setting--women on the dancefloor in the beginning chopping it up with "Kung Fu Fighting" and then down with a strand of Chic's "He's the Greatest Dancer" (compare and contrast that to Chic's desperate, chilly appearance with "I Want Your Love" in Shame) as the men pose as wallflowers, scoping out the scene, and then soon, the men and women are dancing together, with some on the outs, vibing, eyeing on in moments of loneliness. Like a ballet, a dancer enters out-of-rhythm and off-kilter, setting a new, impassioned tone on the floor. Time literally stopped and nothing else mattered when I first saw the dance set to Janet Kay's "Silly Games." It's such an unbelievably gorgeous, haunting experience--one of the most ecstatic filmmaking moments of song and dance I've seen in a while. And as the flitting images of crosses suggest, this party is communal, holy. As with much of McQueen's other work, the movie is more about experience rather than complex narrative, so the encounter, potential-relationship story at the center of "Lovers Rock" of young Martha (Amarah-Jae St. Aubyn) in a faintly glittering purple sheath (perfect costuming all-around by the reliably great Jacqueline Durran) and Franklyn (Micheal Ward), isn't as riveting as the world rotating around them. But as this paradise moves into the morning after with a beautifully-shot bike ride and our buzz killed by a red-haired white man, "we can see it in" her "eyes," Martha relives her night with resplendent joy. ****

Posted by MrJeffery at 9:58 AM