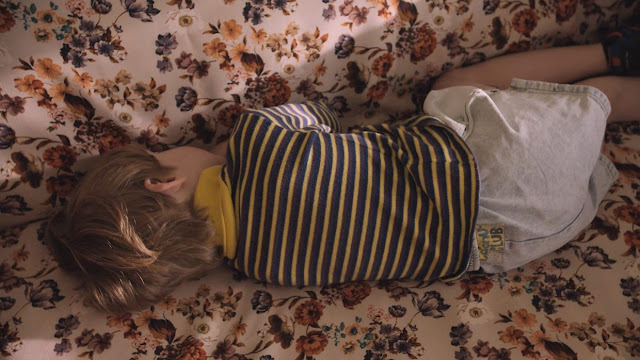 Ricky D'Ambrose's elegiac The Cathedral, both a remembrance and a sort of personal filmic reckoning, is such a mesmerizing sensory experience. As we watch the years go by of an American boy's life--from the late 80s into the distressed dawn of the twenty first century--there are the constant ticking of clocks and their hushed chimes, natural light against wood floor, the gentle whir of ceiling fans, wind through trees, soft hums of traffic, the distant rumbling of a lawnmower. There's the sound of chalk against the blackboard in a school; the sound of crayon against a paper placemat; the dipping of eggs into dye. There's also the visual pops of teals and royal blues (plastic Solo cups and plates) and the earthy beige-ness (khaki pants and wood-paneling) of the eras. And moreover, there are newsworthy markers of time, on radio and television, from the World Trade Center bombing to a rousing Bill Clinton State of the Union address to Katrina. It includes items (a $39.95 road atlas; a strewn My Buddy doll; a paper cup dispenser) and commercials for items--things marketed of such value in its time (Liberty coins sold at the now defunct Montgomery Wards, Kodak Gold Film preciously sealing memories). 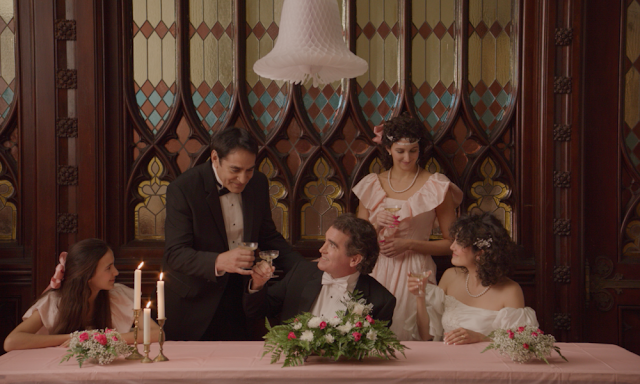 The film consists of carefully composed scenes and vignettes of a family, often bickering with one another about attention and money, told through the images and also the voiceover of a distant-feeling--almost Barry Lyndon-style-- narrator. The Cathedral skims through young Jesse's life, sometimes hovering over the mundane: a sleepy afternoon of daytime naps and Crayola magic marker coloring to larger family gatherings of events pivotal in his life--his third birthday, his confirmation, high school graduation, and funerals. Jesse is extremely quiet and reserved throughout, described often as a "sweet boy." In the meantime, he shows a budding interest in visual arts--going through pages of a book, whether it be images of grand architecture of a cathedral or movie scenes and stars; taking his camcorder to record little details within his occasionally volatile father Richard's (played with great grace and panache by Brian d'Arcy James). There's such a--I sense intentional--flatness to Jesse (where are his friends? where are his adolescent outbursts?) and in the acting of the young actors that portray him (Robert Levey II and William Bednar-Carter), that he almost becomes character as camera. In what feels like close, autobiographical material of D'Ambrose, D'Ambrose's camera (shot on digital by cinematographer Bart Cortright with a late-1980s lens) in turn, is another layer of meta. The familial dramas were less interesting to me than the construction of the movie--and perhaps that's also intentionally so. In one striking moment, Jesse describes a prosaic-looking 1989 snapshot of two family members by answering a litany of school assignment questions. These questions are also pertinent to The Cathedral itself--a spare, but extraordinarily intriguing achievement. ***

Posted by MrJeffery at 5:27 PM