Sometimes a movie, seemingly without much flash, can take you on an unexpected journey. This was my experience watching Nuri Bilge Ceylan's absorbing drama The Wild Pear Tree. At over three hours, thoughts of trepidation about the length of the film immediately melted away; it's a compelling study of character and societal confinements, that moves along with a slow yet economic pace, framed in eye-catching photography (by Gökhan Tiryaki). The last film of Ceylan's I've seen was the highly-praised Once Upon a Time in Anatolia, which I found tedious, despite Tiryaki's incredible cinematography. Some of those night shots are burned into my memory. 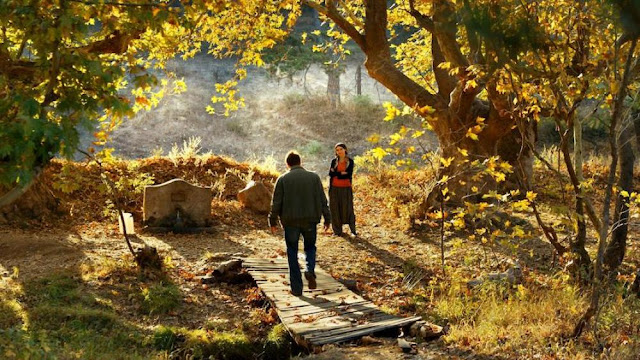 In The Wild Pear Tree, Ceylan takes on the story of a struggling writer, Sinan Karasu (Dogu Demirkol), fresh out of studies and bumbling about his hometown of Çan on the eve of exams, which will, in part, determine his future. Karasu's family lives in a cramped house. Sinan's father Idris (Murat Cemcir) is a gambling addict, and from the little glimpses we get of his life through Sinan's perspective, his reputation seems to be notorious in town. Sinan tries peddling his book for publication--starting with the mayor (Kadir Çermik) and also trying to scrounge up some money to publish himself. Ceylan's more-than-meets the eye tale, interspersed with eerie dream sequences and some philosophical musings--including on religion (I was lost a bit in that aspect as musings on religion are usually a bit uninteresting to me), have a haunted, intriguing effect. 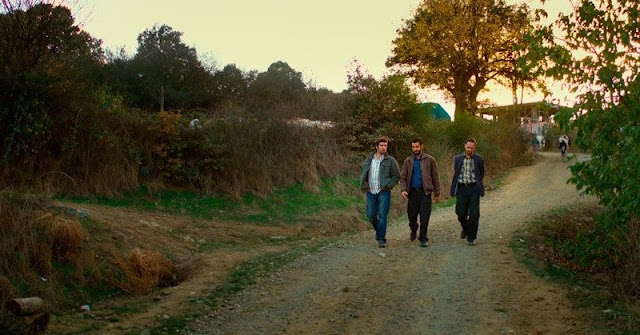 The camera stays close to Sinan, and his lumbering, blue-jeaned frame, as he moves across beautiful landscapes under varying climates (a sudden rainstorm, golden, summery sun and wind-blown greens, and bitter snow) or even inside a Trojan Horse statue. Outside of these striking visual and aural templates, what could have been a ponderous movie, feels loose and spry--perhaps in part to Demirkol's performance. Demirkol is a "non-actor," this being his first feature. He has a very ordinary appearance and body type, no frills or airs, and I think this helps add to the authenticity of the film. His character sometimes makes misguided decisions, leading to bruises and bit lips; he doesn't always listen carefully, and sometimes acts in a sort of unaffected, nonchalant way to those around him. Demirkol's loose, unstudied feel is one of the main strengths of the picture. Ceylan shows the limitations of Turkish men including the abilities to advance in any way in society--especially dreamy, creative types. Even as The Wild Pear Tree dips into some surreal, fever-dream visions, the movie stays grounded and precise. ***1/2

-Jeffery Berg
Posted by MrJeffery at 10:35 AM