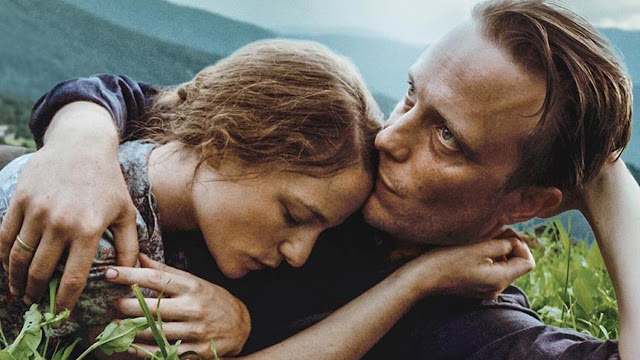 There’s an early moment of joy in Terrence Malick’s rambling epic A Hidden Life where an Austrian farmer Franz Jägerstätter (August Diehl), his wife Fani (Valerie Pachner), and young daughters are playing a game. “Up in the clouds” on the verdant hills of their land, Franz is blindfolded, trying to capture one of his kin as they lightheartedly try to misdirect him with the sounds of soft metal clangs. Encapsulated in this sweet, brief moment is much of the themes and motifs of the picture. Set during WWII, this idyllic village is removed from the horrors of war. Yet the tensions of a world “stronger than me” trickle into their existence. Franz was a real-life conscientious objector who would later become a martyr of the Catholic Church. His and Frani's story is portrayed here with elegance and reverence by Malick. 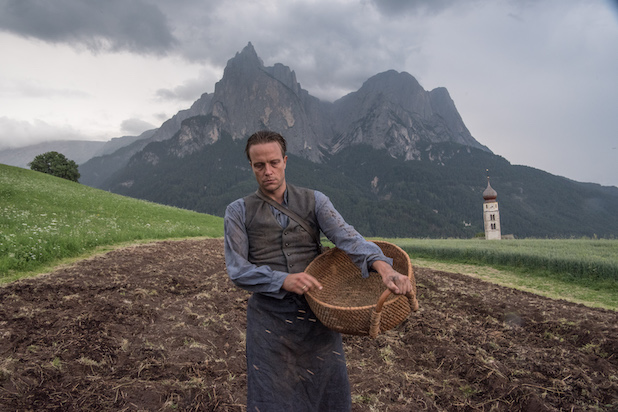 I am one who can endure even the weakest of Malick's pictures, which he delivered in a row over the past few years (Knight of Cups, To the Wonder and Song to Song). If nothing else, I can luxuriate in their beauty--those swooping cameras capturing sun-drenched fields and sky. In A Hidden Life, he employs cinematographer Jörg Widmer, who was a camera operator on some of Malick's past projects. The sweeping landscapes of this setting are undoubtedly breathtaking to behold. But what makes A Hidden Life more than just pretty pictures is how we see the townspeople turn against Fani as Franz refuses to serve. The landscape, once idyllic and raptrously beautifully, and so connected to the humans who live there, sours. We see the mud and grueling work that Fani has to undergo to keep her family and farm alive while her husband is off imprisoned by the Nazis for his resistance. And while we are in her unsettled but beautiful world, we know outside there is rampant destruction. Even Franz's grim prison-life is cut-off from many of the worst atrocities of the time. This limited perspective drawn some scorn and has caused a rift in reactions to the film, but the close scope is both symbolic of the failings of humankind and the impossibility of an all-encompassing view.

While Malick's visions often feel of deep religiosity, in A Hidden Life, there's hints of complexity in its views towards the church--especially the way its followers turn their back on Franz and Fani. Besides the soft clanging sounds of the at-play scene, bells abound throughout the picture--signifying arrays of meanings: mourning, warning, fear, the passage of time. There's also a contrast between the church's hushed rooms, with its gorgeously painted ceilings, and its spectacular failings to address the horrors of humankind. We even hear some philosophizing from the church's painter on how people want to see their deities: gilded, high and pure. Maybe it's a reflection too on Malick's own aesthetics, how his standards of capturing high beauty sometimes leaves little beyond its visual allure. 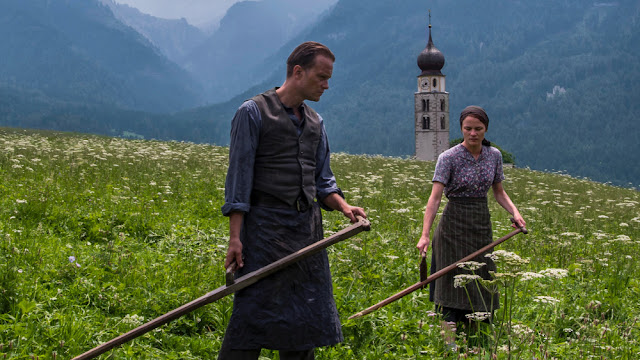 Unlike his uneven rout of recent films, Malick has found a subject here of clarity and is close to his heart. The principal players here are deeply moving and committed and keep the film from floating entirely away. Also adding to its more grounded quality is James Newton Howard's score, mixed with operatic classical pieces, which features an enveloping, coalescing theme. One flaw that continues however is the burgeoning running time. The length here seems excessive and I wondered how shattering its impact would have been with a shorter length, especially with the repetitious nature of the story. Yet, there's only one Malick and his singular vision and telling of this tale is appreciated. ***1/2

Posted by MrJeffery at 8:44 AM