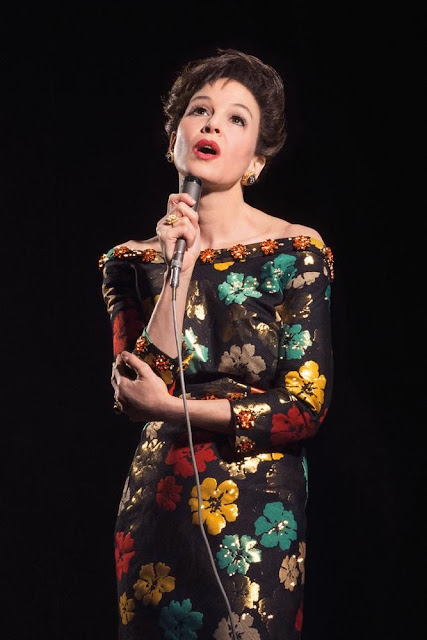 My Judy Garland obsession began somewhere in the early 1980s with The Wizard of Oz. I drew pictures of Dorothy--in severe ballpoint ribboned-braids and heels, acted out Dorothy's antics in our rambling backyard forest, played the soundtrack on my Fisher Price record player over and over. All of this eventually caused Garland burnout in my family--eventually my vinyl record went missing. And there was likely a phobic-tinge in the reactions from my parents who barred me from dressing up in Dorothy garb and renting the film (that silver-stickered MGM label on the VHS is burned in my mind). Soon, still a child, I would get into Meet Me in St. Louis, pine for the VHS of 'Til the Clouds Roll By at Big Lots. And at some point, I stopped thinking about Judy so much--whether that was conditioned, or by choice, it's hard to remember exactly.

I come to this year's Judy, in a less-repressed state but also more world-weary. I recognize that Rupert Goold's film occasionally slips into a mawkishness (I detest the watery, glittery title font), is faintly slipshod, with awkward transitions, some stilted scenes--especially with Garland's young children--but, coming in with low expectations, I was lost in and mesmerized with Renée Zellweger's nervy turn. It's an audacious performance of course, especially from an actress who hasn't really proved herself as an aces singer (some of the notes she hits in Chicago make me wince), nor as an authentic-feeling actress--there's always a sense of ham (Cold Mountain) and visible determination interlaced with a deep, vulnerable insecurity (Chicago, Bridget Jones' Diary). But those seemingly out-of-depth facets of Zellweger's abilities and aesthetics lend themselves appropriately to Garland in this state of her life--a cyclonic ambling toward a sad finish line. I haven't seen it in some time, but in my memory, a better portrayal for both young and older Garland is Life with Judy Garland: Me and My Shadows. Like its predecessor, Judy, could also have been easily nabbed as a TV-movie, but I'm grateful for Goold's film as a theatrical release--where it played well to my rapt, mostly older audience--as a reminder of Garland's talents and the brutal truths behind Hollywood's mythic gloss. 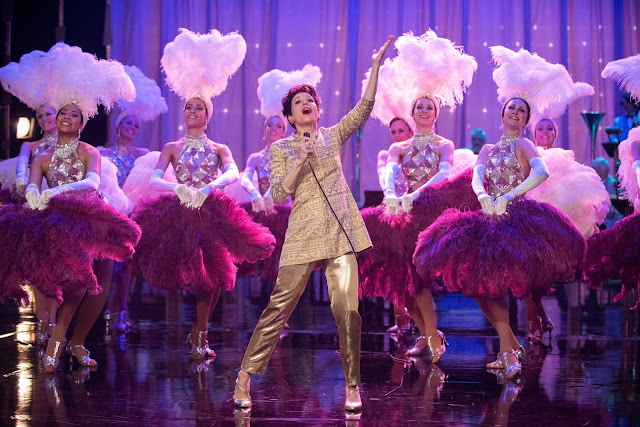 Here, we see Judy broke and homeless, desperately holding on to the custody of her children and her own life. She moves to London to make money through concerts, where, despite being in the midst of a more modern, swinging 60s of sprouting "flower power" shops, her popularity and appeal has sustained itself with certain audiences. In the era of her iconic wisp of short black hair and satin suits and heels, Judy can barely get through these performances, often in a fog of sleeplessness, pills and booze. We've seen two recent music biopics, Rocketman and Bohemian Rhapsody, which showed manipulations from others while tracing the highs and lows of their subjects. In Judy, the subject is female and older, long victimized by her studio system since childhood--the possibilities of rising again limited; a joke about her being with the Rolling Stones sounds like a beautiful pairing now, but in the context of the times, probably impossible. This self-destructive shade of Garland, which encompasses much of this embracing but deeply elegiac film, is not a particularly flattering one, and one that many choose to psychologically bury under the weight of her sparkling filmography and discography. But it feels like a necessary one to occasionally delve into--the promise she held in her final years as an actress and entertainer. It is quite startling that she passed at 47 (many in the theater gasped, though it's all known history), as she looked so frail and much beyond her years. 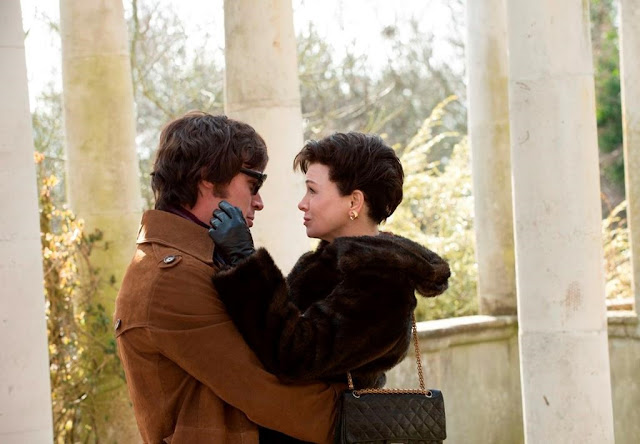 Zellweger is captivating to watch. It's the kind of high-wire act you breathlessly prepare yourself for a fall, but she's convincing throughout. I preferred Zellweger's guttural, imitative warbling over lip-synced tracks of Garland's vocals. The make-up and hair designs aid in the recreation, as do the brassy costuming by Jany Temime (the teal knee-length wedding dress and hat!). Gabriel Yared's quietly effective score adds to the somberness. Maybe I felt more attuned to and forgiving of this film than others may, because of my interest in Garland. Like those childhood ballpoint drawings, it's impossible to recreate such a one-of-a-kind legend, but try as we might through the limitations of whatever artistry we may hold. ***