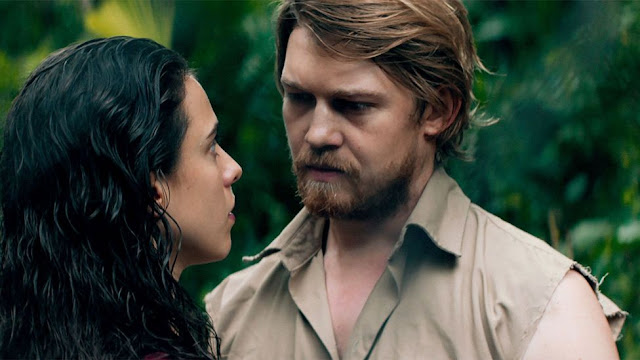 There's something pithy and tart about the exchanges Margaret Qualley and Joe Alwyn share in Claire Denis' shaggy Stars at Noon, based upon a 1986 novel by Denis Johnson, that recalls dialogue of 1940s noir. Seeing this movie as a breed of neo-noir beset by roiling sexual tension helped me ease into its circumstances. Set in contemporary Nicaragua, though filmed in Cuba due to logistical issues, Denis' film closely follows the travails of Trish (Qualley), an American, who at one point in her life seems to have been a reporter--perhaps uncovering the brutalities of government--but is now aimless, sometimes a sex worker, and drifting drunken in circles (and circles--in cabs, in the streets) around the area and also within the modest hotel run by a wearied innkeeper (a small but strong performance by Monica Bartholomew) where she has been given a room to camp out. For Trish, she wants a way out of this endless maze, but is stuck--without American cash, transportation, a passport. A maybe-knight in shining armor, so-to-speak, an Englishman Daniel (Alwyn), scruffy in a crisp white Graham Greene-esque suit, appears at a bar and the two strike it up through drinks and paid sex in his hotel room. He's on business with an oil company. Was he planted there? Why is he there?--much of these two unsavory characters' motivations remain mysterious. Through drunken binges, the two ultimately get entangled in a torrid, sweat-dripping love affair. There's desperate clinginess, but also blankness (as embodied well by Alwyn's muted, shifty turn) that emerges between them. Daniel ends up embroiled in scandal that puts his life in danger. What nefarious activities he's been up to is unclear as they wade into their swirly affair and plans to flee. 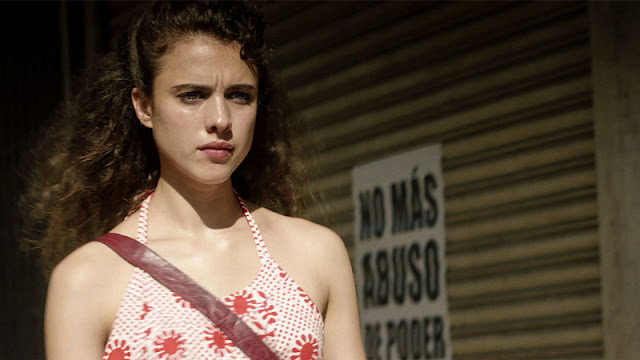 Denis' films often look at tenuous relationships between people, revealing layers of characters through actions and what they say about themselves. Johnson's novel seems particularly in line with this style--characters are revealed through what they say, but also what others say, and in the heated haze of this movie, none can really be trusted. What's somewhat different is that Denis is in the lane of a certain genre that I don't usually connect her to--an Against All Odds or Year of Living Dangerously-early 80s style thriller of white people in peril in foreign countries (interestingly around the time the novel was written). I respect particularly how complicated and muddy Denis' film adaptation is. It's sometimes jaggedly filmed in hand-held style as it follows the wreck of Trish, and then suddenly still and lushly observant as it locks into a sort of lull of repetition (waking up midday hungover in sweaty sheets happens more than twice). Even though these characters show sudden pierces of reprehensible behavior and attitudes, especially towards non-white locals--the film, and perhaps the novel, doesn't aim to embrace nor pity anyone, just recognize their degrees of their desire and desperation. 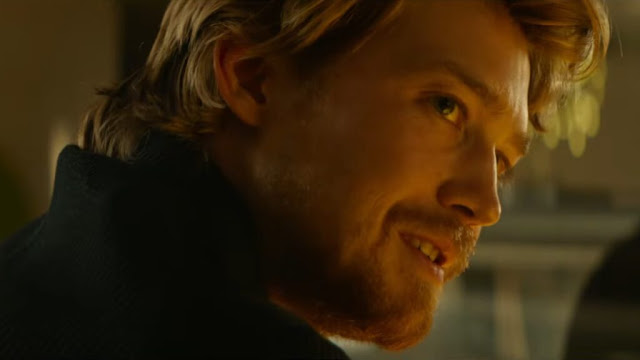 As per Denis, the movie is rich in its crafts. The central turn from Qualley is so riveting, with little bits of testy reactions and thrown-out emotional firecrackers, her make-up-rimmed eyes and feral-like movements and odd vocal inflections are a course in artistry. The score by Tindersticks is an incredibly atmospheric pastiche of jazz: unsettled, prickly percussion and languid trumpet melodies. To me, it recalled some of the scores of 70s neo-noirs like Michael Small's work on Night Moves. When the gorgeous original title song (which feels like a play on Neil Young's "Harvest Moon") kicks in at a desolate, dark blue-lit club, it doesn't quite reach the towering heights of Denis' Commodores "Nightshift" sequence in 35 Shots of Rum (one of the best music in film sequences in modern times), but it still crackles with undeniable sensuality. However, something indescribable is missing from these two characters craggily flung together. Alwyn even breaks away from the dance for a bit, breaking the mood. One wonders, especially now, why this story is being told?--with its markers of the COVID virus hovering over its characters, even having one pivotal scene within the white tent of a PCR site. Yet, even when one of them says something as shudderingly bad as "you're skin is so white," there's an indelible mesmerizing aspect at watching these two continuously fall apart and try to claw their way out. What does this appeal say about the filmgoer who is so taken by it? ***

Posted by MrJeffery at 9:31 AM