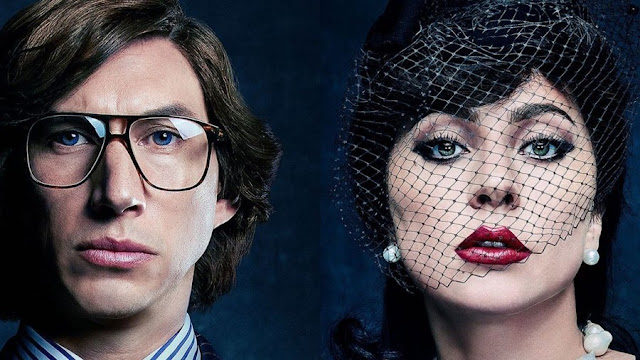 Bless Ridley Scott for trying to keep the glossy Hollywood adult drama alive. His recent The Last Duel, a triple mirror of character perspectives, was surprisingly gripping, with a guttural, fog-drenched finale of action-packed tension. House of Gucci is far less sharp, more meandering and messy, but still, it’s a big movie that’s hard to ignore, with Lady Gaga’s brassy movie star performance as centerpiece (anecdotally, I feel like she's the main reason why people care about seeing this to begin with). The new MGM logo (seen first in No Time to Die) graces the screen before this movie, and there's something about it--that nostalgic roar--as a reminder of studio pictures that appealed to wide audiences of yesteryear; but also representative of the constant shifts, deaths and rebirths of corporations--this new CGI lion, emblematic of the ticky-tacky era of blockbusters we've been immersed in the past fifteen-odd years.

The first half of House of Gucci is an Italian-set 1970s meet-cute romance between Maurizio Gucci (Adam Driver) and Patrizia (Lady Gaga), from their vastly different worlds. Scott, not known for subtlety, fires up the film with obvious foreshadowing--the Gucci empire, partly in the hands of Maurizio's  dour, terribly chilly father Rodolfo (Jeremy Irons), and it should be noted that he has a cough (an omen in any old-fashioned movie--and one awaits his demise for the plot to move forward). Obviously, he's not going to be approving of a daughter of a middling truck company business or a woman who doesn't know the difference between his Klimt and a Picasso. Soon we meet the more gregarious Aldo (Al Pacino), Rodolfo's brother, who seems more accepting of Patrizi, but no less as scheming to strengthen the Gucci family. Aldo's son, Paolo (Jared Leto), is the hopeless black sheep of this clan, with dreams of becoming a designer himself. After marrying Maurizio (Scott pairs their wedding goofily to George Michael's "Faith," of all musical choices--I braced myself as I heard that familiar organ's opening strains as Patrizia walked down the aisle), Patrizia, is now entangled in the Gucci web. As the saga evolves, including Patrizia's journey into a state of deep-freeze (it's perfect that one of her more indelible looks is sipping an espresso in a fur hat and a sleek crimson-pink ski suit in Switzerland) as she falls prey to her materialistic desires, with a fierce loyalty to and protection of this brand. One should be prepared for oodles of melodramatic utterances of the word GUCCI in all varying forms of movie accents. 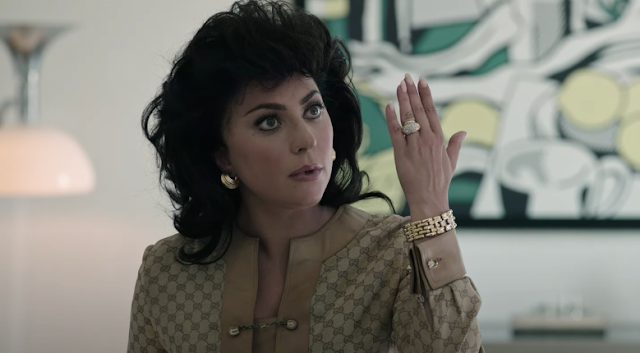 Fittingly, during my screening, someone was wearing a heavy perfume that permeated the theater. House of Gucci is definitely heavy perfume, it ladles on broad strokes and broad performances. No one expects Pacino to hold back. Leto's Paolo sure is a sight to behold--I never felt as if I was watching a human being--but someone speaking rivers of dialogue with a dramatic accent through latex that seemed on the precipice of collapse. This isn't necessarily a bad thing, as the movie doesn't seem to be gunning for being delicate. In times where acting in dramas is very understated, I found myself enjoying the mess (and Leto's character is despairingly messy to match) unravel before my eyes. Gaga, however, finds that sweet spot between understated realism and the hyperbolic, reminiscent of Sharon Stone's flashy turn in Casino. It's a star power moment, extraordinarily watchable, with slivers of wry humor and even glimmers of pathos when she turns villainous. She pairs well with Driver, whose character is the quietest of the family members, therefore gives the more quiet performance. The dissonance between them as characters and performers is magnetic to behold. For such a meticulous craftsman, Scott's direction is wildly uneven--the film disjointedly moves from romance into stodgy corporate drama into true crime thriller and one can feel its epic runtime. The pop music cues are unfortunate and unimaginative--usually out of sync from the time-stamped years the film announces, from mismatched Donna Summer eras to the aforementioned George Michael track. The classical music choices are somewhat Olive Garden-y, if plucked from a "World's Greatest Classical Music" CD. Despite some of its pedestrian notes, House of Gucci, is no less fun to watch, thanks mostly to Lady Gaga's layered turn (when she's off-screen, you want her back!); and once the film treads in a more melancholic space in the finale, there's a sad wistfulness to it that sneaks up on you unexpectedly, making the whole jumble feel emotionally worthwhile. ***

Posted by MrJeffery at 2:59 PM