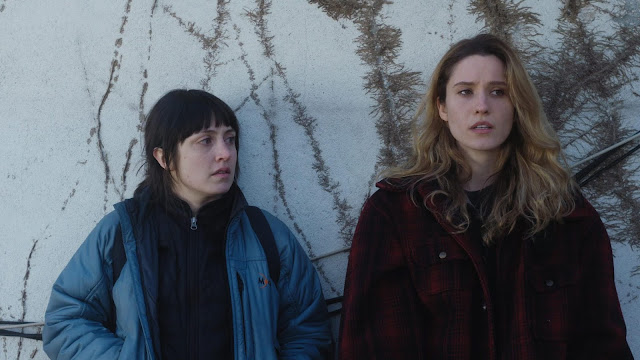 There's a moment of reaction in the film Fourteen that took me by surprise in how precise and truthful it felt. Perhaps because I've been recently going through the engrossing, if heated, melodrama of the middle of the Orange is the New Black series, Writer / Director Dan Sallitt's friendship tale, Fourteen, felt particularly spare and bracing. The film follows Mara (Tallie Medel) and Jo (Norma Kuhling), friends since middle school and now navigating dullish Brooklyn twentysomething lives. 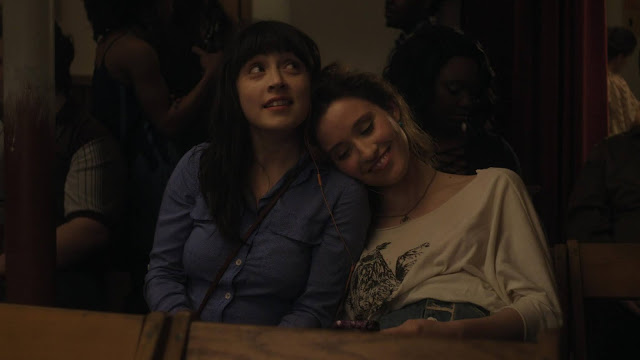 Sallitt's script exhibits perfectly calibrated dialogue--there's a curvy push and pull between these two friends and between other characters; the aura of an expected "breakthrough" statement never quite cuts through. Mara is persistent in light judgment and probing--somehow not in an unpleasant way, since she is also empathetic and supportive as well. Both Sallitt and Medel strike a precise tone and tenor for this character. In an awkward dinner scene, Medel seems to know exactly how to direct her gaze. Kuhling's Jo is unbridled, compulsive and confused, constantly needing something (a cigarette, dessert, drugs, alcohol, et al). Troubled characters like this have been in countless films, usually ratcheted up to an excessive level, but Jo feels distinctive in her low-key flightiness and predictable unpredictable actions (in one scene, Jo wears a Fred Babb print T-shirt that reads "Time becomes meaningless... in the face of creativity"). Her decisions can be almost agonizing in their opaqueness, illuminating Mara's simmering frustrations ("you just vanished," Mara says at one point and later, "you need something all the time, it gets difficult"). Interestingly, Mara works with children and young adults as a teacher's aide and tutor. Her clean, matter-of-fact help with a teen on fractions isn't too far off from the way she relates to Jo about deeper personal problems. Jo does have a big moment in the film of emotional release--a shaky, tricky scene for Kuhling to navigate that she pulls off nicely. In another movie, this might be a tearjerker clip, but there's an uneasy flatness, as if we are looking at Jo through Mara's muted perspective. The music-less quiet of the movie adds to this perspective too. The balance between Mara and Jo, and their intimacy show why they have been friends for so many years, but there's a coldness, a slight distance as well. 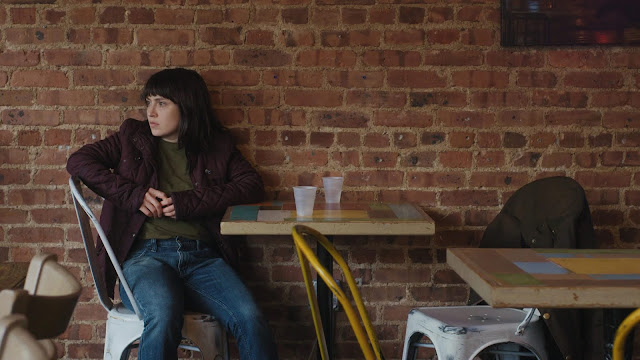 Fourteen, meticulously crafted and paced (Dan Sallitt also edited the film) slyly slips through the years. The end credits tell us it was filmed in New York in different months in 2017 and in 2018 which adds to its feel. Boyfriends come and go, jobs change, hairstyles are altered and the friendship ebbs and flows. Another aspect perfectly done in the film are the phone conversations (and also, the subtle changes in phones themselves). Usually the conversations are shown from one side: from banal things like making car reservations to cancelling plans to listening to a desperate plea for company. These apparatuses ring, buzz, upend the flow of conversations, relationships. The way these people talk on the phone and listen also add to the characterizations and authenticity. Overall this movie is a wry, beautiful portrait. ****

Posted by MrJeffery at 4:10 PM