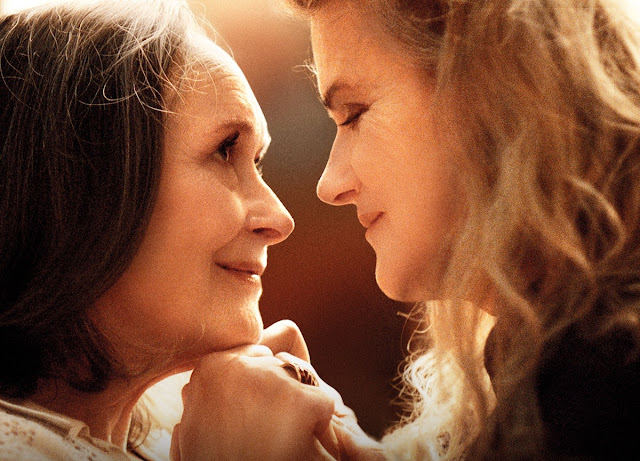 Italian Director Filippo Meneghetti's intricate, involving chamber piece love story Two of Us, is harbored in unease and the immediate stirrings of a secret, long-rooted relationship in the wake of unexpected trauma. It is quite exceptional for a debut feature length. With effective editing (by Ronan Tronchot and Julia Maby) and an uneasy soundscape, the film mixes dream imagery with realism, studded with sequences of suspense, such as hiding in rooms one isn't "supposed" to be in. The title Two of Us is literal in many ways: it describes the decades-old, affectionate relationship between Nina (Barbara Sukowa) and Madeline (Martine Chevallier); it details the seamless switching points-of-view we see in the first and second halves of the film; it also describes the duality between Madeline's hidden relationship with Nina and her "other" life with her family; moreover, it refers to Madeline's life that we see in the beginning, on the precipice of coming out to her family, and her life after when she is rendered speechless and physically confined. 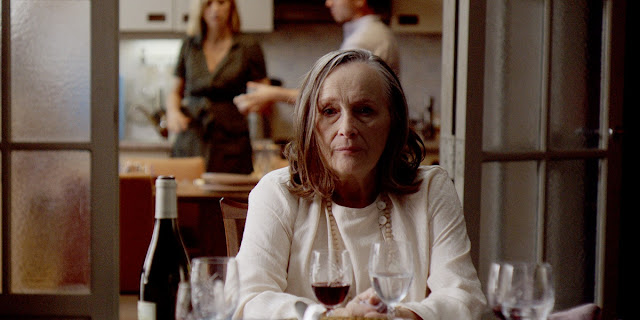 Set within a small, non-glamorous French city, the film, often taking place in rooms, has a cloistered feel. It's no wonder Madeline and Nina have grander plans of escape. Madeline is fearful of coming out to her immediate family: a no-nonsense, chilly frost-blond daughter Anne (Léa Drucker) and her aloof husband Frédéric (Jérôme Varanfrain). Many notable LGBTQ films of today have moved past the coming out stage, but Two of Us portrays a modern story of an older woman who hasn't made that step quite yet--and perhaps there are many out there who can relate to her trepidation. It helps that Chevallier's performance is so warm and complex. She's aided by the showier Sukowa, a piercing-eyed, quietly intense actress, whose Nina can be unbridled in her ferocious protection of Madeline and her condition and yet at the same time, who never seems to be able to overstep the line Madeline hasn't been able to cross herself. 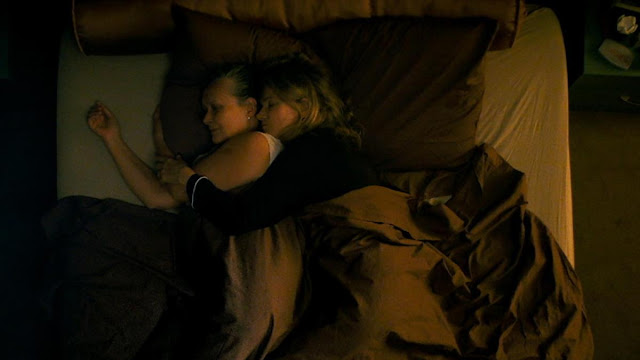 While the story has its own sense of complexity, visually the movie creates subtle tensions. Perhaps intentional, or more an emotional response upon myself as a viewer, I felt that the film was lessened in color and struck a colder visual tone in the scenes between Madeline and her family; in the scenes with Madeline and Nina: much warmer, earthy.  In moments where Madeline and Nina are apart from one another, there's immediate dissonance, anxiety: an eerie, empty public laundry where a washer spins in a noisy clang; a clinical, drab, dim-lit hospital waiting room. Meneghetti, with the guiding of cinematographer Aurélien Marra, strike tones in ways that aren't too obvious. The story doesn't always click fully--such some off-tones and the subplot of a bumbling caregiver (Muriel Bénazéraf), but the acting and chemistry between the two leads is so strong, I felt fully engaged nevertheless. Is there a dissatisfaction that lingers in Anne where she feels there is something "missing" in her communications with her mother? Anne is definitely a character to ponder over, as she is sketched somewhat thinly here. The little pieces the film gives us from our two perspectives is what we are left with, and the movie ultimately emerges as a compelling, moving, and satisfying twinning of narrative. ***