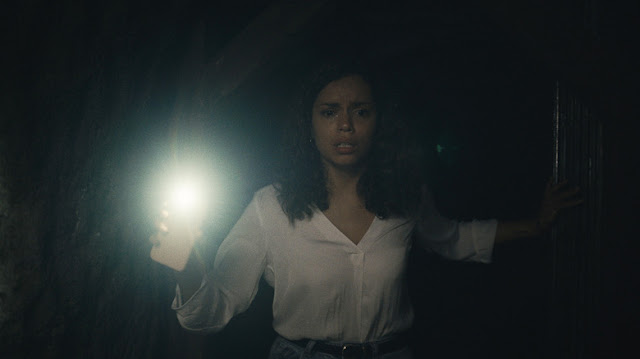 One of the enduring representations in our universe of the haves and have nots are the working class vs. the British royal family. I happened to see Zach Cregger's zanier-than-expected Detroit area-set horror flick Barbarian under the cloud of the news of Queen Elizabeth II's passing. While these two events may seem disparate, many movies of the past decade or so, both domestic and international, have illustrated the conflicts and strife of the persistent widening gap of wealth throughout the world. Horror especially is a genre where social issues can be addressed in different shades--sometimes blatantly, sometimes with more subtlety. Recently, I saw the new, vivid 3-D rendering of Steven Spielberg's 1975 Jaws. While there, I overheard one puzzled audience member say, "I didn't know this was going to be an old movie." Even though it is an "old movie," interestingly, above the surface of its lurking terrors and riveting action, its plot of anti-science profit over public safety feels particularly acute in an era of an ongoing virus, especially its rampant mishandling (and ignoring of completely) in its early months. In horror, humans are almost worse (or just plain worse) than its monsters. Thankfully, like Jaws, Cregger's smart picture is a blend of both the subtle and the blatant--without losing focus of its frightening visuals and disarming humor. 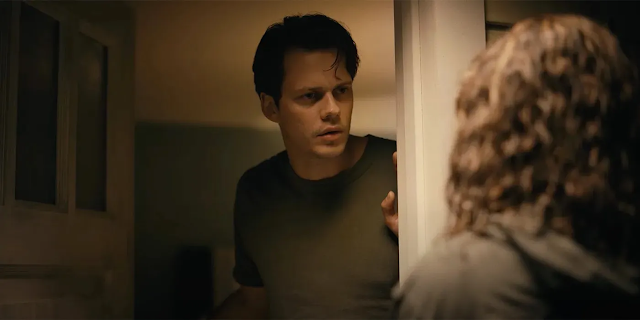 It's set up as an Airbnb mishap tale with Tess (Georgina Campbell) in Detroit for a job interview as a documentarian's research assistant arriving at her gentrified rental house in a raw, hallowed-out neighborhood. To her surprise, Keith (Bill Skarsgård) has settled in there as well. A double-booked Airbnb in a creepy setting is a good premise to begin with for a horror picture--especially when Skarsgård wavers so well between gentle and potentially menacing--but Barbarian, is decidedly and thankfully) up to more than that. Abrupt tonal shifts happen (I don't think I'm used to these in recent movies! And either was my audience, who audibly gasped their choruses of "What the... ?") and the film becomes increasingly twisty, with breathlessly desperate characters making questionable decisions, prompting many moments for patrons to shout out "why is she going in there?" Basically it's a good popcorn pic layered with shrewd commentary on our fractured economic, racial and gender disparities. When Justin Long (of similarly goofy Jeepers Creepers lore) pops up as an odious Hollywood, "let me put you on speaker in my convertible" exec type, I was prepared for hokey caricature, but Long suavely makes it more complex (and--very funny!--especially when using a tape measure). It's a firecracker of a performance. The film's make-up, art and set direction crew, alongside Joe Murphy's clever editing all create a movie of pleasure, ickiness and moments of real heart-pounding, jittery flashlight-lit what's-behind-the-corner suspense. And while it's ambitious threads don't all come together so satisfactorily, it's still a rousing effort, and definitely one of the more distinctive movies of the year. ***
-Jeffery Berg
Posted by MrJeffery at 1:25 PM