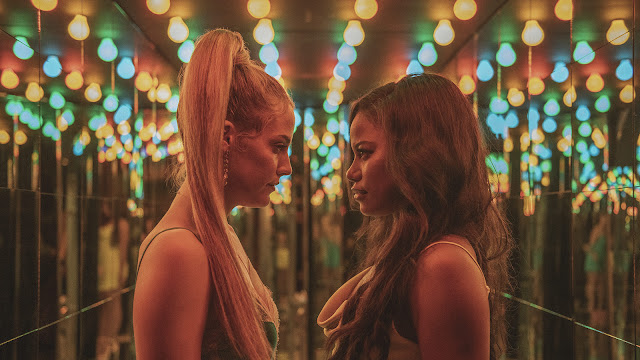 Like many features in recent years, Director Janicza Bravo's Zola (which she also co-wrote with Jeremy O. Harris)  is a tale borne out of an American era in the midst an ongoing proliferation of screens, digitized communications and widening gulfs of disparities. Whether or not one revels in the technological changes of our time, a film like Zola, based upon a Twitter thread by A'Ziah "Zola" King, can put to test one's views and opinions. 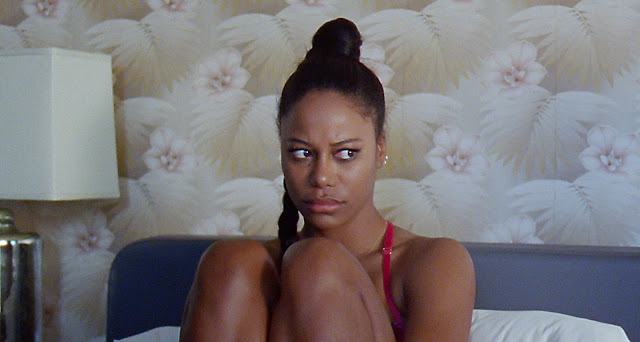 The slew of trailers proceeding this film reveal a confused era of movies. West Side Story's effectively simple soundscape of Rita Moreno's wistful recording of "Somewhere" is an incoming event movie that harkens both forward and backwards. Also in the mix was a Hugh Jackman movie: Lisa Joy's Reminiscence, set in near-future of drowning cityscapes. Jackman's hulking frame, submerged in water and wired up Minority Report-style. Rather than predicting crimes of the future, he's delving back into the past. "Nostalgia became a way of life. There wasn’t a lot to look forward to,” he intones. “Nothing is more addictive than the past.” Released in an America of division and disturbing record heatwaves, Zola's tale can be somewhat simplistic and lacking, but it feels very new, very of this time, and it is directed with rigorous ingenuity by Bravo. 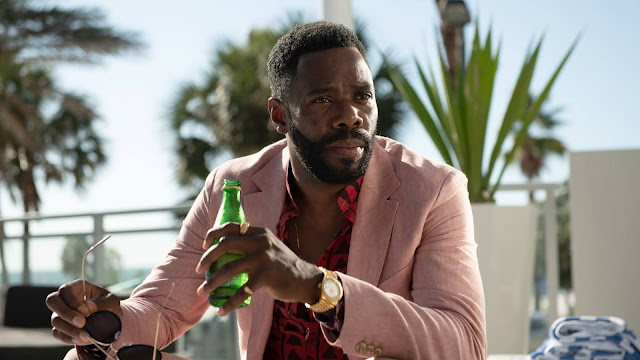 Taylour Paige's waitress / stripper Zola travels with new stripper friend Riley Keough's rowdy Stefani from Detroit to Florida. A rippling half-mast Confederate flag ominously feels like opening curtains to the second half's disturbing odyssey into sex work and crime. Their driver, named X here (played with fitting, unrestrained histrionics by the always great Colman Domingo), is a vicious and cunning pimp. And Stefani's boyfriend Derreck (Nicholas Braun, who has already perfected relentless goofy cluelessness on Succession) is in tow. The plot is a bit ho-hum, with Zola's occasional narration sometimes interjecting with trite "you won't believe what happened next"-kind of jabs. These gestures to the audience, like most winding tweet storms that want to be read, is supposed to shock, but usually is just there to keep you following along. Despite the narrow focus and the violence within the story, Zola, with her resilience and sly humor, is a welcome guide. The treatment isn't the glam hijinks of the first half of 2019's Hustlers (note that Zola was shot in 2018); Zola is a harsh journey in its few days span --one where money doesn't really get anyone anywhere or really obtain anything and doesn't even get to those who have earned it. The movie isn't designed, despite her layered turn, to make you marvel at how good Jennifer Lopez looks at 50. Instead this film is ridden with discomforting images of the body and sex slavery. Zola's story is told through the vitality of a blazingly good cast, and the quietly marvelous and humorously reactive Paige kept me fully rapt. 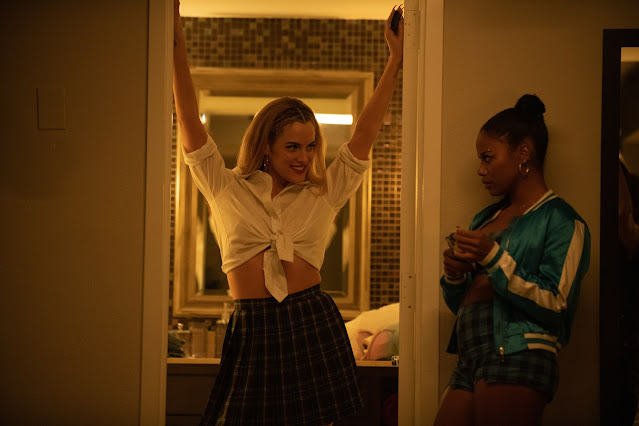 Some have complained of the film's lack of backstory for its characters. We never truly get to know much of them--their lives and relationships--something we've become accustomed to with all of our hours and hours of episodic television. Zola's mother calls at one point, and we only see and hear Zola's terse replies. But the film seems to be intensely avoiding the mining of too much development. In fact, its prop-like treatment of its characters is exactly the essence of social media itself: a boxy mirage of statements, clips and videos. The jester of the piece, Braun's Derreck, is the anthesis of Twitter. He's fumbly, inarticulate--the opposite of pithy. Both Zola and Stefani have an ease with their language--a sharp-fanged quickness. Sometimes people and sounds seem to be caught in loops (two boys dribbling basketball on heat-baked motel concrete)--like replayed, cyclical clips--a perpetual back and forth that never feels resolved. The framing of the film too, by Ari Wegner (who has shot other visually-intriguing works like In Fabric), in its tight 16mm and mellow, filtered, washed-out presentation, often feels like scrolling through pics, and keeps everything within rigid cropping--as if we can't see beyond the frame to more expansive visual elements. The movie is cut by Joi McMillon (who did fantastic work co-editing Moonlight) and her choices and rhythms work in-sync with Wegner's visuals. Mica Levi's twinkly score--heavy on moments of silence, dissonance, harps and vibraphones, is like a devious sprinkling of fairy dust upon this Wizard of Oz-like fever dream. I was impressed by the daringness of Levi's broody score for Jackie, but the music here, perhaps because it's more pleasing and light and feels more intrinsic in this picture. It's a complicated soundtrack that I'd like to investigate further in its structures and effects. Between cast and crew, Bravo has created a distinctive vision. 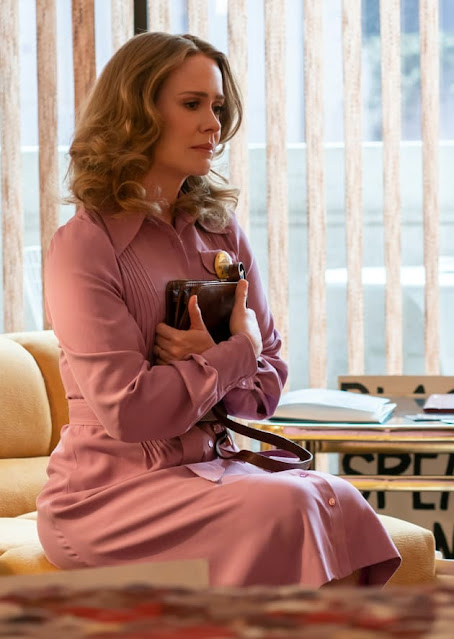 Last year, I was floored by the idiosyncratic, series-best episode of Mrs. America entitled "Houston." Directed by Bravo, the story centers upon Sarah Paulson's Alice's Alice in Wonderland-esque drug trip through the 1977 National Women's Conference. Through Alice's loopy perspective, the episode relayed both the chaotic and unifying elements of the event. Alice, who originally opposes the Equal Rights Amendment, suddenly, and waywardly, and accidentally, finds herself among the women's rights supporters she once railed against, including Gloria Steinem. The episode, which movingly opens with the blaze of the nationwide torch relay in Seneca Falls, ends up focusing upon a transformational moment for one woman among many. In Zola, even if the allegiance to the main character's perspective can make her supporting players sometimes end up feeling stock--the events lacking a more ambiguous eye, Bravo's unique ability to follow one's journey through chaos with pathos, levity, and darkness, with the aid of her team's alluring craft, is a gift, and a welcome one in our jumbled American cinematic era. ***1/2

Posted by MrJeffery at 5:34 PM