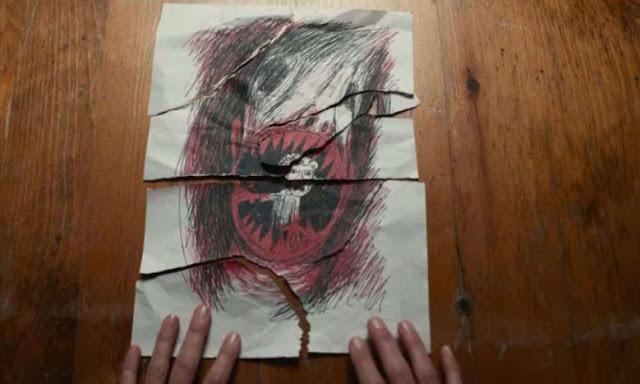 The ongoing stream of somber horror movies of our era continues with Scott Cooper's (Crazy Heart, Out of the Furnace, and Hostiles) Antlers. Set in the rural Pacific Northwest, Cooper's film (co-written by Henry Chaisson and Nick Antosca) follows a group of traumatized people in the wreckage of a ravaged economic landscape. Keri Russell plays a teacher, Julia Meadows, returning to her small town in Oregon to live with her brother, police officer Paul (Jesse Plemmons, who has furthered his career of character roles, interestingly many in law enforcement) in their childhood home. Through scraps of flashback, we witness the torment of Julia's childhood at the hands of her father. We also see her fight back urges to buy alcohol,  glaring at bottles in a worn convivence store. Her relationship with her brother is somewhat strained. Her teaching seems unfulfilling, with a mostly unengaged class. She is drawn, however, to a shy, seemingly bright young boy, Lucas (Jeremy T. Thomas, who does excellent work with a difficult role). Lucas harbors a secret in his dingy, dark house: behind a padlocked door are his little brother and father (Sawyer Jones and Scott Haze) afflicted with a mysterious illness. 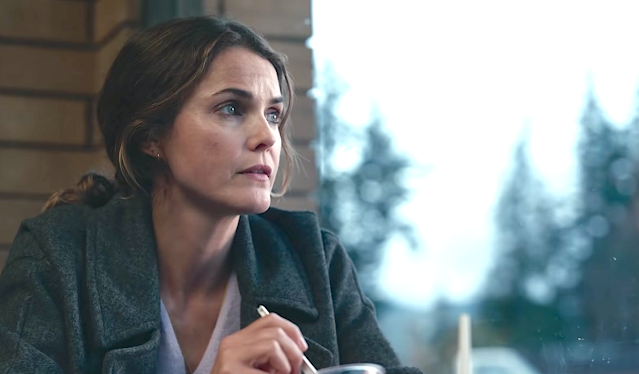 Scott Cooper is known for dramas with characters going through harrowing journeys of varying degree, so his transition to a horror film is a fitting one. Antlers reaches into the traumas of the present and past, with a firm sense of setting, that recalls the heavy, twisty tales of Stephen King. Alongside cinematographer Florian Hoffmeister (who shot the lovely-looking Terence Davies' films The Deep Blue Sea and A Quiet Passion), Cooper creates a film of unending eerie atmosphere--foggy, deep-darkly-lit, with cryptic flashes of light (flashlights, the blue-red glow of police lights, a creaky camera flash of flesh that conjures the opening of The Texas Chainsaw Massacre--a key house in the picture reminded me of that movie as well). Another homage could be  George Mihalka's 1981 film My Bloody Valentine. Both films have a sort of grimy grimness to them--and feature coal mines. The mines in Antlers are abandoned and filled with meth labs. 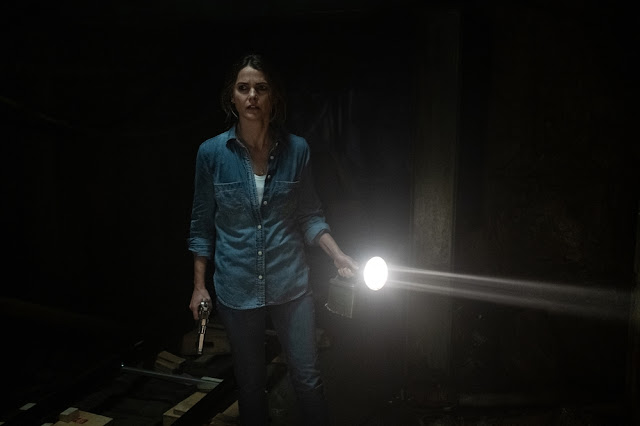 Antlers, a bit late into the proceedings, also evokes the legend of the Wendigo, relayed here by the always solid Graham Greene. I am not sure why Greene's screen time is so short, perhaps there are scenes of his that were cut, but I wish he had been in the movie more. Despite all the layers of the characters, the Wendigo aspect isn't explored as deeply as it could have been, or with as much complexity as the eerie 2001 Larry Fessenden film under the same name. The cast delivers good performances, and it was nice to see Amy Madigan again, who like Greene, I wish had more to do, even if brilliantly effective in a few moments. Overall, Antlers is still one of the better horror movies of the year so far, even if it's a tad overwrought with emotional wounds.  **1/2

Posted by MrJeffery at 7:56 PM