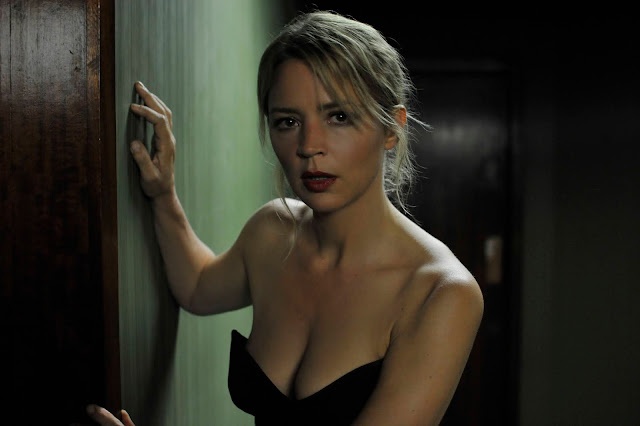 There are a few recent films that delve into the drama and ethics of writers writing about real people in the author's life--Let Them All Talk, Mank and Justine Triet's Sibyl. Set in Paris and also taking an excursion to the Italian island of Stromboli, where fittingly, an active volcano smolders, is a twisty, supple, occasionally soapy tale of a therapist, Sibyl (Virginie Efira), a recovering alcoholic, who begins writing her next novel. In order to clear her mind to write, she cuts ties with many of her clients, save for a young child and an actress, Margot (Adèle Exarchopoulos). Margot, about to shoot a film on Stromboli with German director Mika (Sandra Hüller), is facing a very intense dilemma with her co-star, Igor (Gaspard Ulliel). Intertwining with Sibyl's memories of her own complicated past, Sibyl becomes drawn to and entangled with Margot's story and begins cribbing it for the novel. 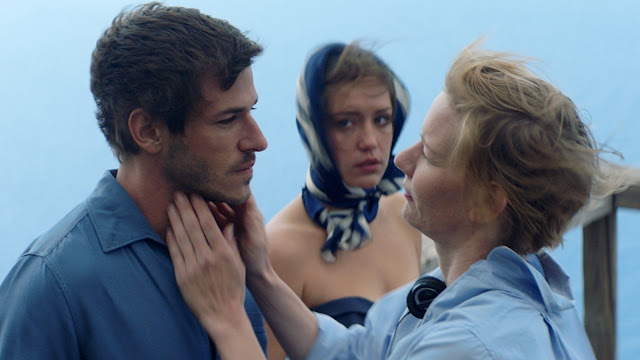 Sibyl, with its attractive cast, locales, and elegant, well-composed shots (Simon Beaufils is the cinematographer), never quite feels as intense as its characters are emoting, is still a quietly wicked and dishy film about control and destruction. Sibyl's character is an array, as she ends up both a therapist, with questionable motives and protocols, and also, briefly, a filmmaker. Aided by unusual cuts and rhythms (the editing is by Laurent Sénéchal), we see Sibyl's past life as an alcoholic in a steamy relationship with Gabriel (Niels Schneider) and in present as a therapist, vaping (perhaps a substitute for drinking), going to therapy, going to AA, and tapping a bit into the heat of her past again through writing. Watching the disasters she sometimes causes and enables can be sort of galling and simultaneously entertaining. While Sibyl, Margot, and occasionally Mika, seem to be the most flamboyant in wreaking havoc, there are men who are tacitly igniting pain and anger through their actions. Triet's movie, co-written by Arthur Harari, see-saws between melodrama, wry comedy, heated passion and chillier contemplation. The female actors are all doing tricky, strong work. The standout, for me, is Hüller, who oscillates between anger and bewilderment with pulsing quickness. Also good in a smaller part of Sibyl's sister Edith is Laure Calamy, who gets some clincher lines when explaining adults to children, "Some people are unhappy their whole lives. They can't shake it. They take tons of stuff to forget they're alive... alcohol, pills... Or both. Helps them feel better. But not entirely. And then, when they have the energy, they use it to ruin other people's lives." It's funny, but that Sibyl and Edith shared a deceased alcoholic mother--who they have stringently different feelings for--it's sorrowful too. ***

Posted by MrJeffery at 4:58 PM