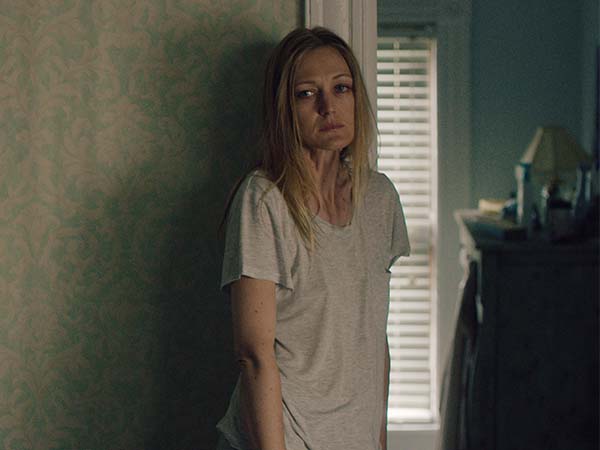 Circling around down into the lower rungs of a character's personal hell isn't always the most enjoyable movie-watching experience, but it took a second viewing for me to really admire the craft of Dean Kapsalis' domestic dread-piece The Swerve. There's a clean symmetry from the get-go--key elements and symbols quickly established: minivan at night, insomnia, a pesky mouse in the house, an apple pie, stressful and distressed family members, prescription pills. Violin music of the score (by Mark Korven, who also penned unique soundtracks for The Witch and The Lighthouse) imitates the sound of an alarm to wake--a sense of discord and unease that the picture settles into. Azura Skye's Holly is at the center--an AP English teacher with two unpleasant tween boys and a distant husband Rob (Bryce Pinkham plays the nondescript-type man well--a man with simmering tinges of anger).  Staring at a wedding photo and photos of the kids when younger in the shadowy bluish light of morning, you get the sense of the heavy weariness of the years on Holly, and eventually we see how unloved and underappreciated she is. 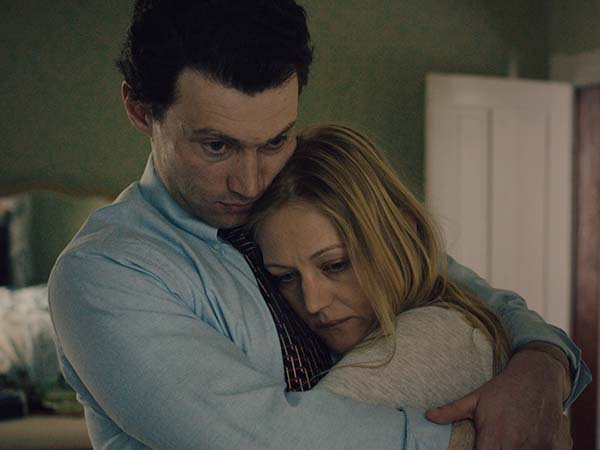 Interestingly, her kitchen where she discovers one of the film's intruders--a scurrying mouse behind a garbage can--is painted a cheerful lemon. It's one of the ways Kapsalis plays with the juxtaposition of color and light; the movie takes place in bright, bright morning and day and pitch black night. There are very few, if any, moments of dusk or sunset. And despite the differences in the light of day and the darkness of night, Holly's unease and despair exist in equal harmonies. 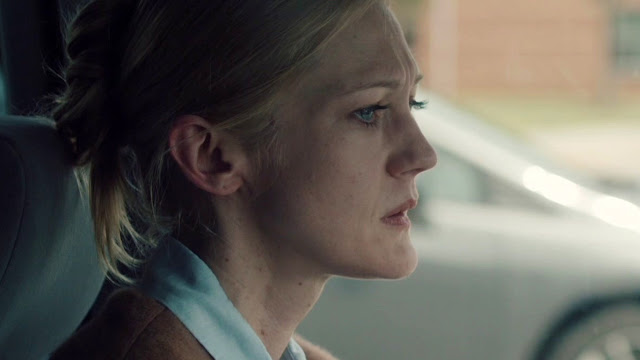 Skye creates a searing portrait--thin with large, freezing azure gazes--she dresses in dark colors--a sweater with a collared shirt underneath, in skirts and black hosiery, with pointy shoes or lace-up boots--her stringy blondish hair dapped into a messy bun. At times, I felt we were in Holly's dreams and nightmares, and I couldn't always discern the "real" versus the imagined--the waking hours blurred. Was it a mouse that bloodied Holly's finger under the bed? Or did she imagine? The film's presentation of Holly and what she is experiencing cannot always be trusted as reality--just as one of her doctors asks her to stop believing that she has rabies. The film examines what can be controlled and what can't (the unruly mind). In one scene we see her scratch marks, like those of an animal, on her husband's neck--but Holly doesn't remember this happening. Skye's performance of mental anguish is captivating, painful and fully-embodied. As a foil supporting character, Holly's sister Claudia is played by Ashley Bell (The Last Exorcism). Bell envelopes the role--with her piercing, intimidating looks, an intensity and scathing directness from a place of hurt. In a way, this directness that Holly lacks is a bizarre breath of fresh air, though it's blunted by Claudia's cruelty. I really enjoyed Bell's immediacy and presence in the picture. 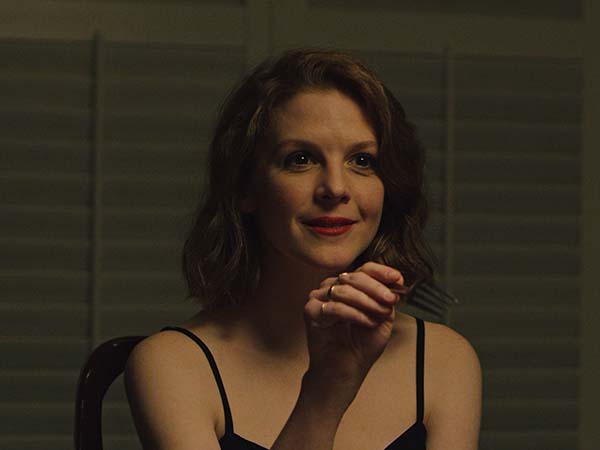 The feel of Holly's predicament is captured in the filmmaking and pace. In addition to the use of contrasted lighting, cinematographer Daryl Pittman sometimes frames Holly in the slow, winding motion of a night drive--those yellow double-lines. We see her in Rob's bright supermarket as she slowly walks the aisles for apple pie ingredients, a lowly clarinet intoning on the soundtrack. Or in the school, walking alone down a locker-lined hallway. The movie is filmed in Roanoke, Virginia, a few towns or so over from where I grew up, so I identified with the setting's atmosphere--especially Kroger, the old houses, and those dark roads. Kapsalis' script sprinkles in symbols and actions that somehow don't feel too pat or too laboriously significant, even though the film is very heavy in its brief runtime. Holly, in teaching Dante's Inferno, scrawls "Describe three types of moral dilemmas" on the chalkboard for the class. Her student, shaggy-haired Paul (Zach Rand), who has a crush on her and also happens to be the checkout guy at her husband's grocery store (a certain nightmare logic there), looks on. These sprinkled elements, like rat poison laced into peanut butter, are layered in the story's ambivalent, fever-dream concepts and provocative actions. ***

Posted by MrJeffery at 9:46 PM