Undoubtedly, even if his films tad to err on the side of the overwrought, Sam Mendes has always been a director of terrific craftsmanship. With the aid of cinematographer Roger Deakins, Mendes has constructed another technically masterful work with his WWI drama 1917. British Lance Corporal Schofield (George MacKay) and Lance Corporal Blake (Dean-Charles Chapman) embark on a perilous journey across enemy countryside under orders to halt a battle that could potentially save 1,600 soldiers. Like most studio war pictures, the dangerous trek is storied like an adventure / action movie, with many tense moments. However, because of the nature of the mission within the film, the movie lacks grandiose, sweeping battle scenes that have titillated audiences for years. 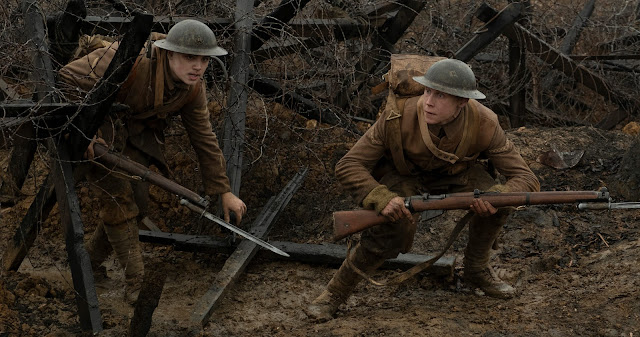 Like Christopher Nolan's Dunkirk, some of our war movies of late seem to be shrinking; in 1917, there is less Braveheart grandeur and more solemn treatments of individualism. The audacious "one-take" style by Deakins lends to the film's intimacy and tension--you never quite know from which corner of the screen fire will rain from. We've seen the trickery of one-take movies as of late, notably Birdman, yet Deakins' vision is particularly distinct here, without feeling gimmicky. It's difficult however, to not be wrapped up in marveling over the bravura technical achievements more than the film's story. Unlike Kubrick's drum-tight Paths of Glory, 1917 is less cynical and philosophical, more pastoral and personal. MacKay, with his long weary face, does a wonderful job at making Schofield engaging, as he moves through many treacherous incidents. Thomas Newman's score is elegant and showy, blending well with the action and drama. You can envision him conducting an orchestra playing it in front of the reels. It's this in-and-out feeling of "this is a film" (replete with British movie star cameos) versus the carnage and devastation within 1917; this tension has always been a predicament of entertainment about serious historical incidents. Yet, Mendes and his cast and crew still pull off a very exciting and reverent achievement. ***

-Jeffery Berg
Posted by MrJeffery at 11:36 AM