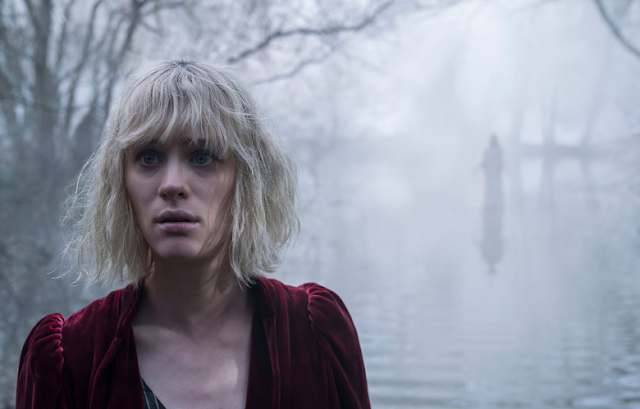 There have been so many incarnations and riffs off of Henry James' 1898 The Turn of a Screw--from 1961's Jack Clayton film The Innocents to Alejandro Amenábar's 2001 film The Others--that it seems unnecessary for yet another one. However Floria Sigismondi's gorgeous-looking The Turning is a moody update situated on a fog-drenched estate in the cellphone-less early 1990s. I call The Turning another entry in the recent string of Gen X-disillusionment pictures: from the taunted classmate desperately re-creating teendom in Ma, to adults in Us and It: Chapter 2 revisiting their demons. Even non-horror pictures like Marriage Story, The Last Black Man in San Francisco, and Hustlers are survivalist tales from different American perspectives that dabble in the thematics of social structures. 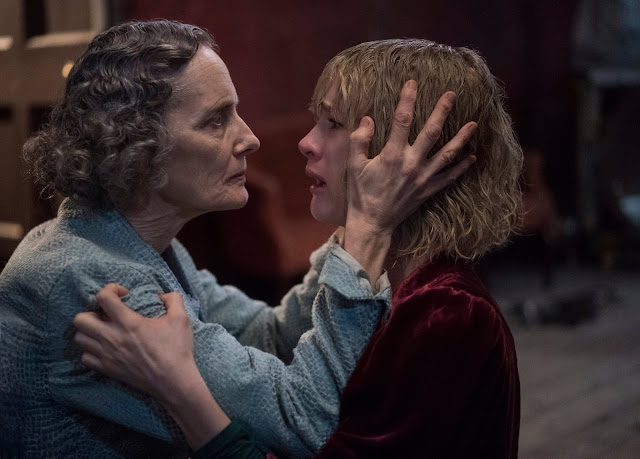 Mackenzie Davis, who was so appealing as the titular nanny in Tully--another piece of Gen X despair--returns here as governess Kate with a prominent blond bang and chin-length chop, roomy sweater and boot wardrobe and a hip little yellow sports car. She approaches her new employment in a gated, rambling mansion with awe. Leaving behind her best friend roommate (Kim Adis) and a mentally-disturbed mother (Joely Richardson), Kate seems determined "to make a difference" in the lives of parent-less children and perhaps has found a new idyllic existence. But things seem off with the introduction of the icy Mrs. Grose (Shakespearean actor Barbara Marten going all-in with a steely turn). And while little Flora (The Florida Project's Brooklynn Prince, doing here what she did best there: offbeat spontaneity) seems precious, the creaky mansion has its quirks--a twisting hedge maze, an eerie mannequin in the bedroom, and a shadowy, off-limits wing of the upper floor. When moody bad boy Miles (Finn Wolfhard) shows, Kate is rattled, and the evil ghost of former groundskeeper Quint (Niall Greig Fulton) starts making his presence known. 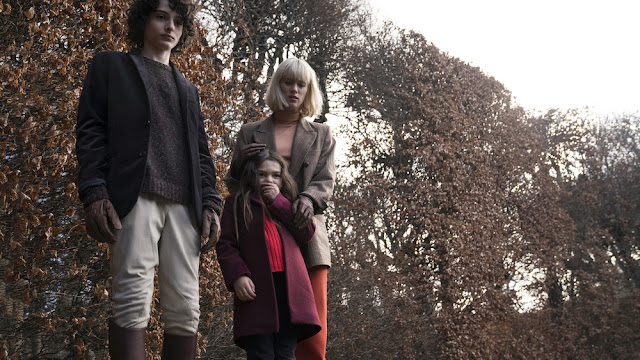 While nothing too surprising happens plot-wise in The Turning, and its conclusion is an almost disastrous muddled mess (my audience left in groans), I found myself intoxicated with the look and feel of the film, especially for a studio horror pic. Sigismondi is known for her film The Runaways and her incredible oeuvre of music videos for artists such as Bjork, Marilyn Manson and David Bowie. Her work here is often beautifully composed. Cinematographer David Ungaro captures the landscapes and gloomy interiors elegantly. Also bonus is a surprising, rich, grunge-era inspired soundtrack of newer and older artists (Courtney Love sings a catchy theme tune, "Mother"). I was also compelled by Davis, engaging throughout, who tows the tricky line between the film's sense of reality and, perhaps, insanity. This atmospheric flick is set under the spell of the news of Kurt Cobain's (perhaps the ultimate ghost of Gen-X) death which introduces the "present day." Even if the results of the film are a bit messy, I admired Sigismondi's risks, the vibe of the picture and its feel of a bygone time, lingered. ***

Posted by MrJeffery at 7:39 PM