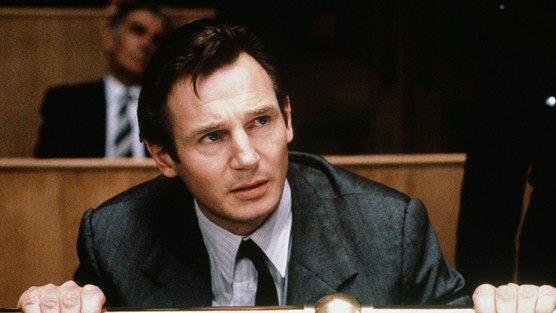 Neeson stars as Tony Aaron, a rouge photographer and private eye, who sets up shots of philandering spouses in bed with other people, sometimes even using his own wife (Maggie O'Neill). The film clearly lays out Tony's work in the main title cards: in 50s England, it was practice to have these paid set-ups of faux affairs to circumvent strict divorce laws of the time. After a tragic mishap, Aaron becomes ensnarled in the life of a wealthy woman Angeline (Laura San Giacomo) who is also a wife of a recently murdered painter. 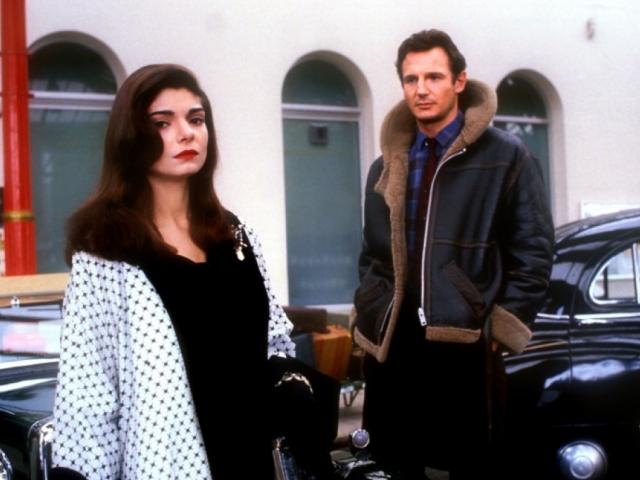 Under Suspicion thrives on a plot of thorny twists and its economical editing (by Tariq Anwar--who would later work on a number of prestige pictures throughout the 1990s and into the 2000s, including American Beauty, The King's Speech, and recently One Night in Miami...). One can see Anwar's gift in shaping a quick-to-the-point feature here, including an impressive, if amusingly overheated, race to the gallows sequence. Despite its trimness, Moore's movie and Vernon Layton's cinematography captures an overcast England mood and devilish intrigue. Also notable is Christopher Gunning's throbbing score.

Neeson is particularly sexy in this role, acting with notes of bravado (and occasionally, into the overwrought). As Angeline, Giacomo is alluring and mysterious, dressed (by costumer Penny Rose) in cool, chic black hats and dresses--the kind of costumes Edith Head might have designed for Grace Kelly in a Hitchcock movie. Perhaps purposefully, Angeline feels out-of-place; Giacomo has always felt more like a contemporary performer than a period piece performer--a certain rawness that seeps through her demeanor. Nevertheless, this adds to the opaqueness of Angeline and the story's main mysteries. A sturdy supporting cast abounds including Kenneth Cranham and a transfixing Alphonsia Emmanuel. Overall, I found this lean, carnal mystery, with its nostalgic early-90s veneer, a nice diversion and a treat in an era of bloated series and films. Under Suspicion is currently available on Blu-Ray from Image Entertainment. ***