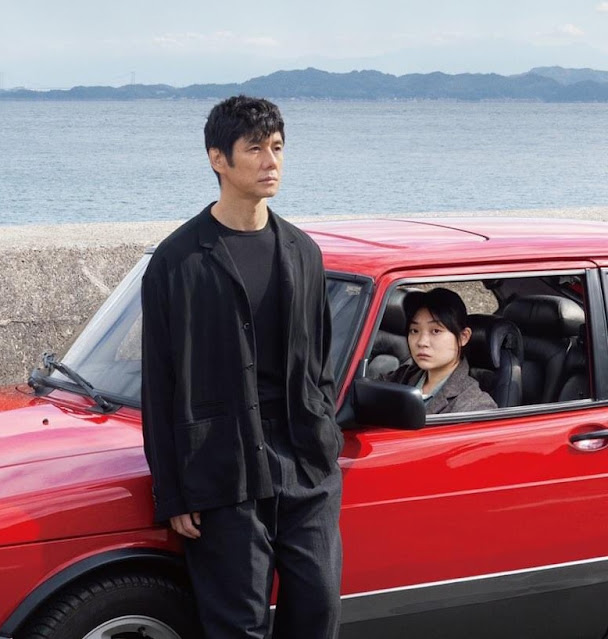 The candy apple red Saab 900 in Ryûsuke Hamaguchi's Drive My Car blazes against the film's continuously washed-out color pallet. It's perhaps why that car, as it roams twisting highways, feels so significantly fixed in memory when thinking about the film. Hamaguchi's piece, influenced by works of Murakami (the movie is based upon stories from Men Without Women) and Chekhov, purposely and relentlessly restricts pleasure--its slick photography by Hidetoshi Shinomiya of modern drabness (neutral clothing, glinting yellow lights and white and grey concrete and wood walls and structures) is a dull thing to behold for its three hour runtime. It reminded me of the tones of the sleek German buildings in I'm Your Man or the white-ribbed World Trade Center Oculus: structures erected as an embrace of modernity, of living, and moving forward--especially over places of crisis, war and death--yet, their sterile, bone-colored somberness a tomb-like reminder of hallowed grounds. 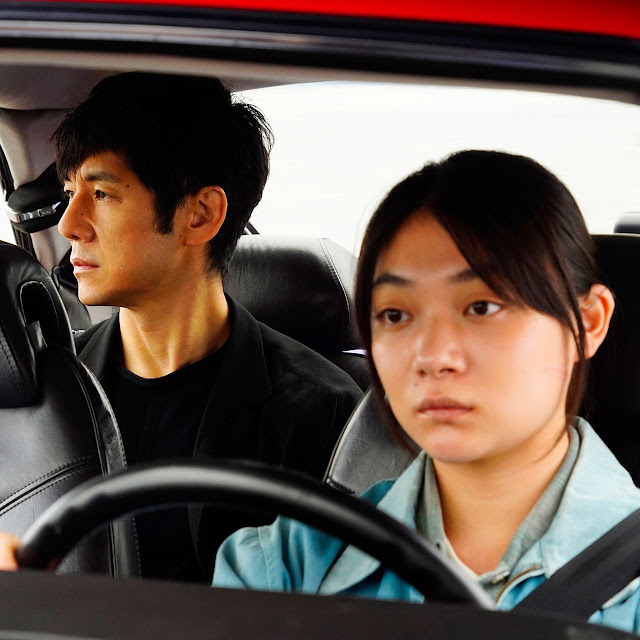 In Drive My Car, a significant part of the movie is set in Hiroshima, where a celebrated actor and writer, Yusuke Kafuku (Hidetoshi Nishijima), is mounting a production of Chekhov’s play Uncle Vanya. Afflicted with glaucoma, a symbolic gesture of blindness on the edge of what meets the eye, Yusuke must hire a driver to travel. Yusuke's quiet young chauffer Misaki Watari (Toko Miura, my favorite performance in the film), drives the red Saab, through womb-like tunnels and traffic-less roads, to what feels like the far reaches of the earth--to her hometown, her family and home, swept by landslides; nature, too, can bury over the past and the dead: viewing the crumpled wreckage of the house, it is half-buried by snow. This is an extremely moving aspect of Hamaguchi's richly layered film, and it's twinned with its literary sources. As we move along in the car, we hear the voice of Yusuke's departed wife, Oto (Reika Kirishima), as she reads lines from Kafka on a cassette tape. Emotions too, are kept at bay. A sex scene of a woman screaming for pleasure is one shrouded to the audience in sadness, shame, and betrayal. Yusuke's bottled-up grief can be both a hinderance and asset to the direction of his play, especially with the casting of a young superstar lead actor, Takatsuki (Masaki Okada)--a perfect  contrast to Yusuke--with a past connection to Oto. 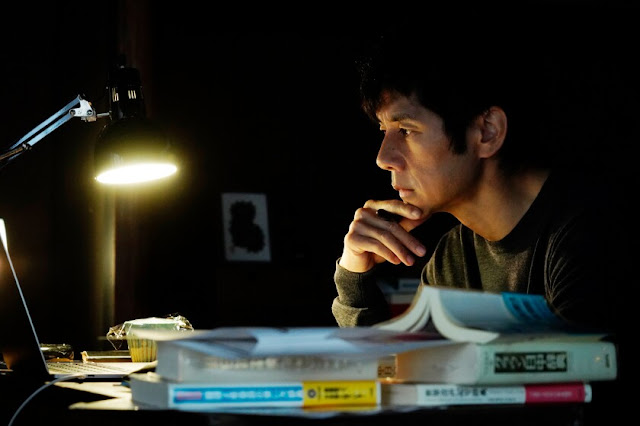 While the film is well-played and shot, it's the unusual instance where the script (by Hamaguchi & Takamasa Oe) is more fascinating than the film itself. Something about those running rivers of language from the tape, to the halting dialogue in the table reads (its cast, often frustrated), to the storytelling between Oto and Yusuke and also, its arresting structure including a prelude, denouement, a coda that all have a lingering potency, all make me think of the blizzardlike wizardry of the script in contrast to the unabating austereness of the film itself. At three hours, visually, the movie is ponderous. The dramatic conclusions, including Yusuke's first emotional outpouring (the acting there, unfortunately, feels forced)--could work well on paper, or in a novel. Somehow, on celluloid, it renders empty and obvious after such a drab, winding run; surprisingly banal, for a film that seems to be up to something more complicated and mysterious. Still, the ambition of the movie and the blending of its literary influences, cannot be ignored. The note of hope the film ends on, that candy red car in a lot of white and silver vehicles, is likely a stirring one for the viewer. ***