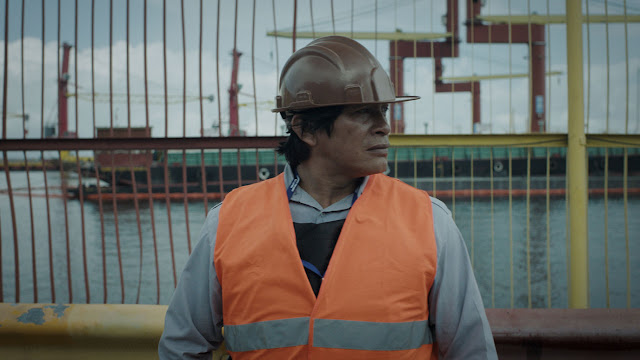 In Maya Da-Rin's mesmerizing The Fever, the sensibility of the tactile and the sensuous is here. I was completely intoxicated from early on--a shot of a night-time torrential rain-shower out the open door of a port worker's shack. That port worker, with his wide strong body and slightly swollen mid-section, standing in the darkness is Justino (Regis Myrupu), an indigenous widower living in Manaus. Forming in the wall protecting his home from floods, is a winding crack--partly a foreboding metaphor for the uneasiness that lies ahead for him, especially as his empathetic daughter Vanessa (Rosa Peixoto) is soon off to study medicine in Brasilia, possibly leaving him behind for at least five years. 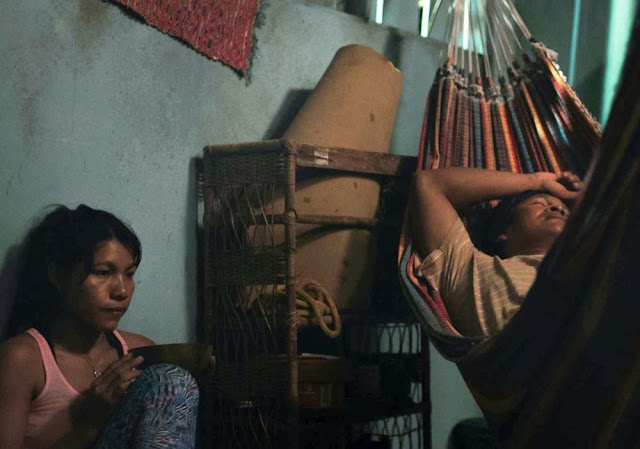 Da-Rin's film is skillfully structured into two distinctive sections and is a portrait of existence; it's cut in half by the mysterious bouts of fever Justino is suddenly struck by. Here, we see the shipshape, orderly, but grubby and unseemly, modern world we want to (and most films often) ignore: mammoth containers packed to the skies. Justino describes his job as a night watch guard at a port as lurking about like a "hunter with no prey." The movie shows the lonely monotony of his route home--sirens, hissing buses, a semi passing rounding the bend at the same time every night under the sodium lights. Sometimes Justino closes his eyes, listening to the cacophony of metal, walkie talkies, and insects. Throughout, The Fever features a strong sound mix--vivid dialogue (sometimes of different dialects and languages), the murmurs and clangs of the industrial world, (sirens, trucks and and cars rumbling) and the surrounding thrum of the natural world. On the outskirts of Manaus, lies a rainforest where a mysterious creature lives (perhaps heard by Justino through the breaking of branches and rustling in bushes), that every now and again emerges, frightening the locals. 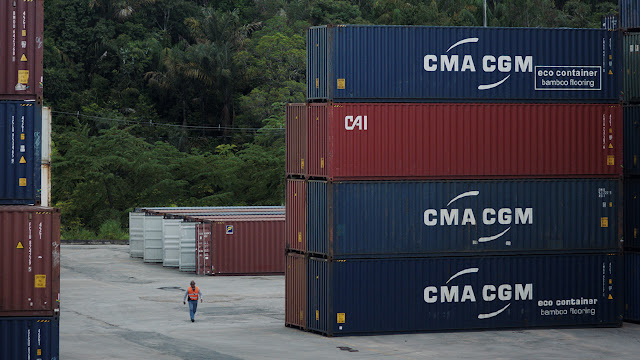 Is this "stained world" that Justino lives in unlivable / making him ill?  Where crooked blinds of a hospital room clang against the wind of a half-open window, where the breeze from a rattling fan is described as "the wind is nice," where a tiny service for the indigenous is held in a green-lit shack, a small group singing of God and bright futures ahead, where he endures the racism ("squinty-eyed") from a fellow workmate, where it doesn’t matter how long you’ve been alive--what counts for your past work is only what's “in the books.” Justino's fever and a visit from his brother could possibly break this dead-end existence. But Da-Rin's picture feels more opaque than neat and tidy, floating above any tendency towards broad strokes. Instead, it's full of carefully attuned observations--a portrait of  displacement, of perhaps-"eradication." ***

Posted by MrJeffery at 6:31 PM