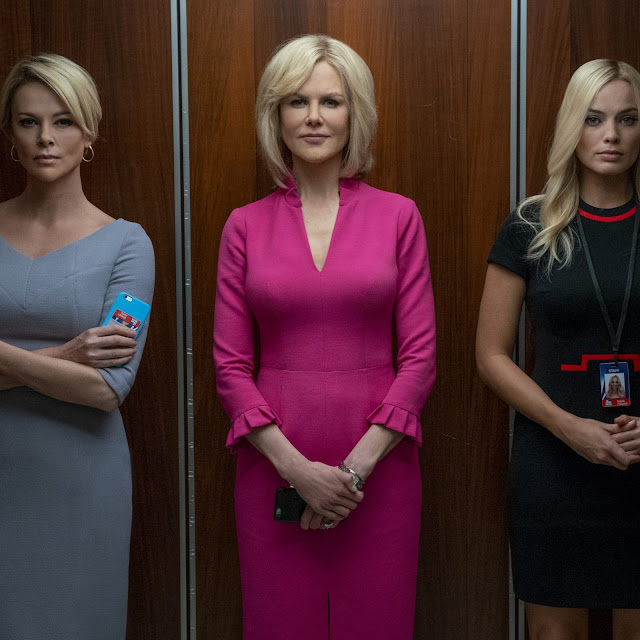 Bombshell is Jay Roach's saucy expose on Fox News in midst of the scandal and downfall of its creator Roger Ailes. The picture definitively paints Ailes as the one clear villain at its core, and that could be the film's main problem. The compelling characterizations by the supporting players and its trio of main actresses--Charlize Theron uncanny as reporter Megyn Kelly, Nicole Kidman as Gretchen Carlson, and Margot Robbie as a starry-eyed Kayla with her Fox News media dreams--make for an undeniably entertaining, watchable movie, but everyone is ultimately undermined by Roach's sloppy direction (touches include cutesy, distracting cable news-like title cards helping to announce to us who people are) and seasick-inducing photography by Barry Ackroyd. Why do we need so many frenetic zoom-ins? The frantic tension of the story is inherent within. Scenes aren't allowed to breathe, busily stacked and collapsing like dominoes; in one particular moment, where a photog is stalking outside Kelly's vacation home, what should have been frightening, feels poorly-staged and amateurish. It's when the film slows down, it's at its most effective--like a tense elevator scene and Kayla's first closed-door harassment by one of the most powerful entities in media (played with icky, theatrical creeper eccentricities by John Lithgow).

Ultimately Carlson helped spearhead the take-down Ailes, which is the main narrative of the picture, with the interweaving of Kelly coming to terms with speaking out on her past and Kayla's fresh traumas. But the parallel story line of the rise of the insidious Donald Trump to presidency (and Fox’s part in that, which is curiously too muted here) during the same time as Ailes’s downfall, doesn’t coalesce as well as it could have. Perhaps to help immediately paint Kelly with sympathy, the movie begins with Trump’s rampant Twitter attacks against her after her “tough” questioning of him in an early Republican debate. "Am I the story?" She incredulously asks. And too, we wonder, the same. The movie then moves to focus narrowly upon the hideous, cultish environment of a hideous network while stretching thin to tackle Kayla's plight (who, despite Robbie's valiant efforts, ultimately emerges as an uneven, simplistic character, perhaps because she’s a cardboard fictional composite of some of Ailes’s victims), Carlson’s bland legal counseling sessions, and Kelly’s reluctance to come forward. As this tornado swirls around, the movie loses sight of the monster the network helped create. 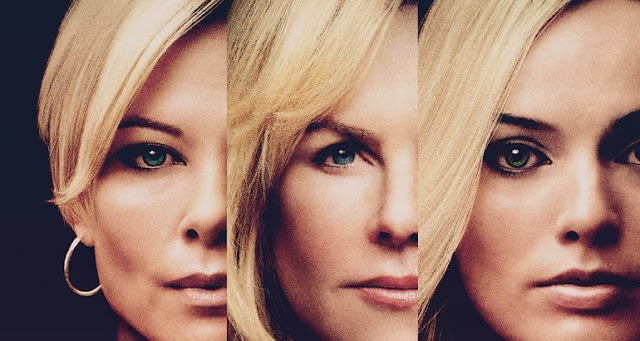 Bombshell is difficult to stomach because it feels so cowardly and trite in its portrayal of its subject matter. There’s something alluring about Theron’s commitment to impersonating Kelly, but simultaneously repulsive as well. Do we really feel for Kelly when the film strives to sympathetically paint her as  coming forward because of her family (the clan surprises her in a completely bizarre “jump scare” moment) while also going on to gleefully emcee he Republican convention?—one of the most repugnant ones in recent American history. Many of our American films are obsessed with either high fantasy or waxing poetic over past centuries, so it’s admirable and important for filmmakers to take a stab at our contemporary times. Perhaps we are meant to feel as queasy about the state of the nation as Kelly after drinking her maybe-poisoned coffee. In that respect, the film succeeds, but as Roach’s glossy but terrifying Game Change did, it doesn’t offer a cathartic moment of take-down that the film seems to be aiming for, because there's too much rotten about so many of the characters here at their core. **1/2