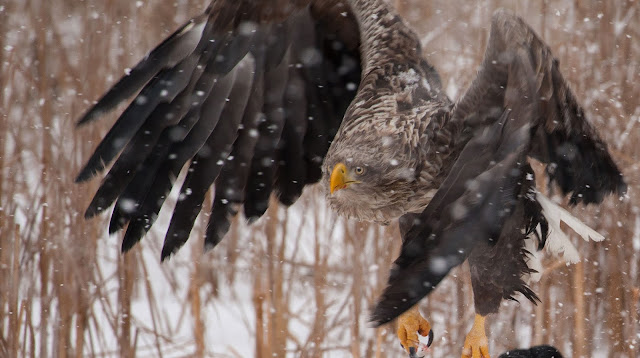 Two recently seen films, A Quiet Place Part II and Mindaugas Survila's documentary The Ancient Woods, in very different genres and modes, interestingly could both be interpreted as retreats to the "noiseless." Survila's piece, without the comfort of voiceover and very little human interaction in general, gives us portraits of animal life within "one of the last remaining patches of old growth forest in Lithuania." The results are, at times, stirring and captivating and akin to a thriller: we watch as a wide-eyed mouse titters near a coiled snake. Perhaps it says something about myself that while watching this mesmerizing little film (running for 86-minutes, which seems just right) my mind drifted towards modernity: the air conditioning's staccato pattering in the theater; the wonderment of the use of camera (Survila also shot the film); and the marveling of the film's intricate, exquisite sound design: all the minutiae of the woods and its creatures--crawling ants, the flapping of wings, the humming of bees (this is definitely a movie that works best in a dark theater, with a good sound system and an attentive, quiet audience). After the picture, which left a faint but indelible impression, I went sunning on the pier, one of the things, besides seeing a nature doc in a theater,  that can connect a city dweller to the natural world. In a moment later that day, that reflected just how disconnected I am from that world, in the shower, I wondered, what is this foreign thing I am looking at circling by the drain? A remnant of a rubber band? No, just a blade of grass. ***

Posted by MrJeffery at 2:23 PM